Following the death of Prince Philip, duke of Edinburgh, on Friday, Virgin Islands government officials offered condolences and reflections. The husband of Queen Elizabeth was 99. “In his long-standing support …

END_OF_DOCUMENT_TOKEN_TO_BE_REPLACED 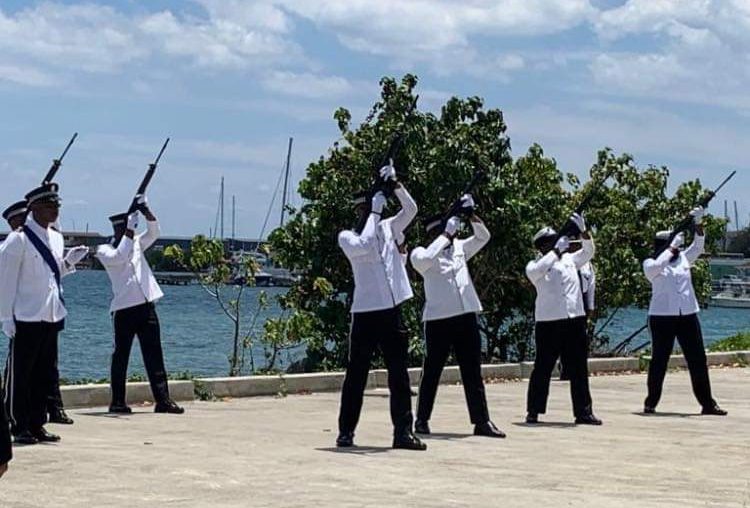 After the Friday death of Prince Philip, duke of Edinburgh, a 21-gun salute was held at the Queen Elizabeth II Park on Saturday. (Photo: PROVIDED)

Following the death of Prince Philip, duke of Edinburgh, on Friday, Virgin Islands government officials offered condolences and reflections. The husband of Queen Elizabeth was 99.

“In his long-standing support of the environment, he was in many ways a man ahead of his time,” Governor John Rankin said during a Saturday afternoon ceremony that included a private 21-gun salute staged by the Royal Virgin Islands Police Force. “But perhaps most of all, he was passionate about encouraging young people, and he founded the Duke of Edinburgh Award designed to nurture personal and professional discovery.”

“As a community with deep faith in God, we, the people of the Virgin Islands, pray for the eternal rest of Prince Philip’s soul and that the Almighty will comfort his loved ones in this, their time of grief,” Mr. Fahie wrote in a statement on Friday.

Mr. Rankin said during the ceremony that Prince Philip lived a life of duty and exemplary service.

Born in the Greek island of Corfu as a prince, he fled his homeland at 18 months old while hidden in an orange crate, the governor recounted. He attended school in Scotland and later served in World War II in the Royal Navy.

Prince Philip was the longest-serving royal consort in British history, staying at the Queen’s side for nearly 75 years, according to the BBC.

The governor also announced that he and his office would observe a period of mourning and that government buildings would fly flags at half-mast until the duke’s funeral, which will be held Saturday.

“I know the people of the [Virgin Islands] will join me in a period of mourning for His Royal Highness, The Prince Philip, duke of Edinburgh and that our thoughts will be with Her Majesty the Queen and the royal family at this difficult time,” Mr. Rankin wrote in a statement on Friday. “Arrangements will be made both online and in person for those wishing to offer condolences.”

A condolence book was opened on Monday at the Old Government House Museum and remained open between 11 a.m. and 3 p.m. on Monday, and from 10 a.m. to 3 p.m. subsequently.

It will be open through tomorrow. An online book also was opened on the official royal website.

“The palace does not expect, nor would encourage, the sending of a wreath of flowers,” Mr. Rankin added in his statement. “If you wish to do so, a donation to a charity would be welcome.”