In 1958, Monica Allen left her native Guyana for the Virgin Islands for what she thought would be a two-year stint. More than 50 years later, she’s still here, and …

END_OF_DOCUMENT_TOKEN_TO_BE_REPLACED 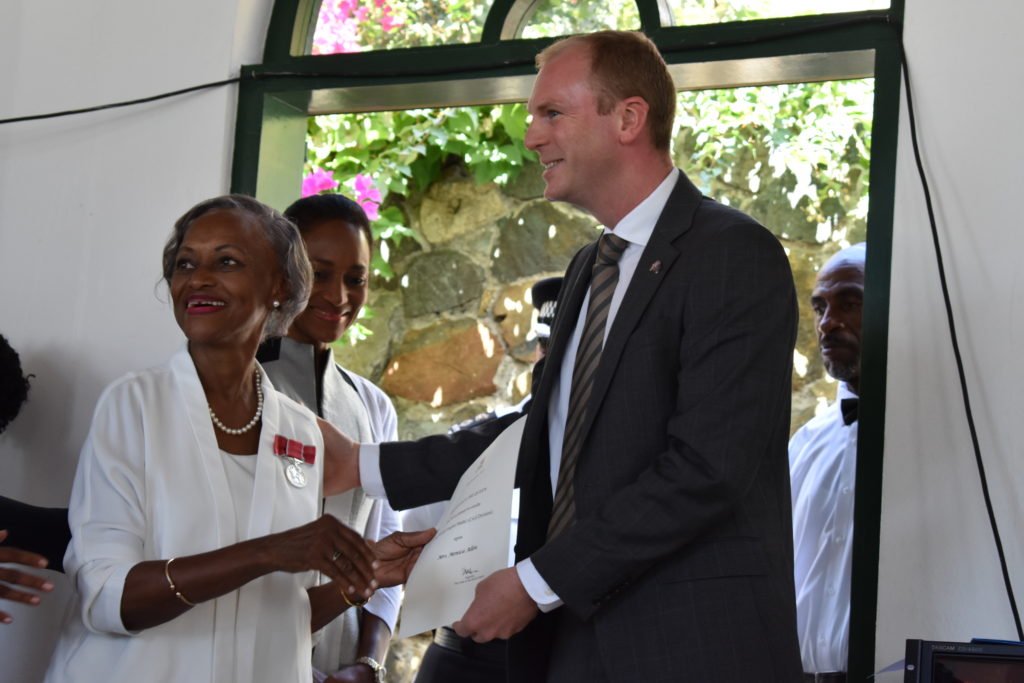 In 1958, Monica Allen left her native Guyana for the Virgin Islands for what she thought would be a two-year stint. More than 50 years later, she’s still here, and on Friday she received a British Empire Medal for the contributions she has made to her adopted homeland.

Governor Gus Jaspert presented her with the award during an investiture ceremony Friday morning at Government House,where he praised Ms. Allen’s “longstanding dedication and service to the community.”

The BEM is awarded by the Queen to people who have made achievements in public life, committed themselves to helping their community, or have been outstanding at what they do.

In her remarks, Ms. Allen said,“ Never in my wildest dreams did I ever entertain the thought or even envisage an occasion such as this. I should say here, with God all things are possible.”

Ms. Allen immigrated to the VI in 1958 with her then-husband, the late Leslie R. Allen, former president of VI National Bank.

“He was offered a job as a teacher…taking on an assignment for a two-year period, and we still are here. At least I am,” she said.

After 25 years in public service,she was appointed acting permanent secretary in the Ministry of Communications and Works, where she was responsible for various subjects that had a major impact on day-to-day life in the VI, including public works, building codes, electricity, airports, harbours, telecommunications, water and sewage.

Superintendent of Police Jacqueline Vanterpool, who conducted the ceremony, called Ms. Allen “a model citizen who adopted the Virgin Islands and made it her home.”

Author Andria Flax,who grew up near Ms. Allen’s home in Road Town, said that she and other young people considered her to be a role model.

“Giving back to the Virgin Islands is her number one aim,” she said in a poem she wrote for the occasion. “She was never swayed by fortune and fame. I am so much the better person since she helped mentor me.”

With Mr. Allen, Ms. Allen had three daughters, five grandchildren and one great-grandchild.

After her retirement from public service, Ms. Allen relocated to the United States to spend seven years as the United States east coast representative of the BVI Tourist Board based in New York, where she travelled cross-country promoting such localentertainment mainstays as the Lashing Dogs and the BVI Heritage Dancers.

“Ms. Allen is not only a matriarch with flair; she is described around the islands as honest, sincere, quiet, soft-spoken, held in highest esteem,” Ms. Flax said in her poem. “To aid the family she adores, she would go to the extreme.”

Over the years, Ms. Allen served on various boards including the Public Service Commission, the Disaster Preparedness Committee, the Ships Entertainment Committee and the Gender Affairs Committee.

In her spare time, she helped lead the Girl Guides and mentored beauty contestants as part of the BVI Festival Committee, training them in poise and deportment and accompanying them on tours.

The honouree also performed as a member of the Hovenden Players Drama Group and, as past president of the Tortola Lioness Club, organised the first baby show on the Government House lawn.

Mr. Jaspert praised “her unwavering generosity and commitment to uplift and mentor those in need” as “a great source of pride for all Virgin Islanders.”