Five law enforcement boats motored out of the Police Marine Base on Friday afternoon, celebrating the launch of the refurbished customs vessel Searcher. Two vessels from the United States Virgin …

END_OF_DOCUMENT_TOKEN_TO_BE_REPLACED 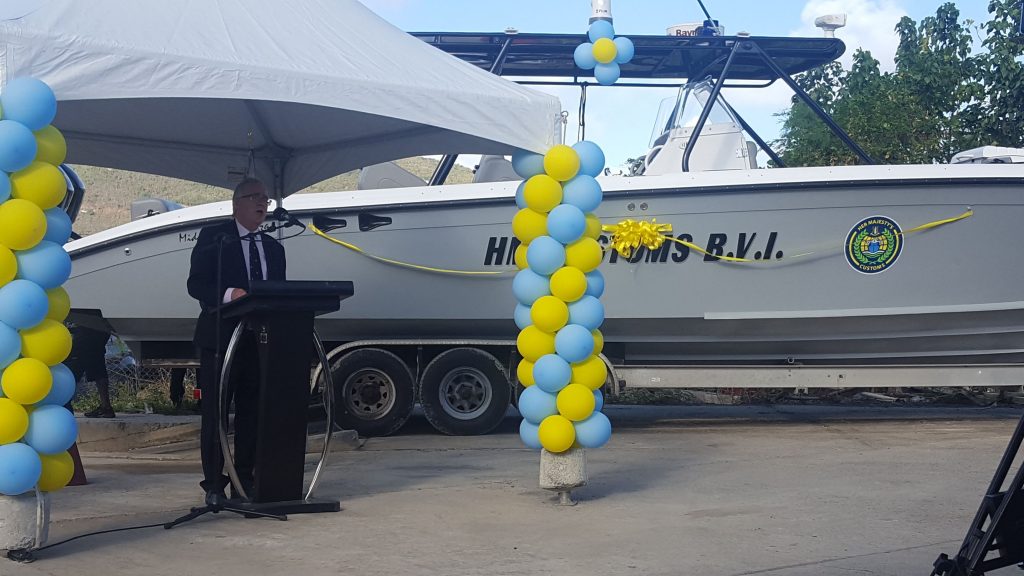 A ribbon-cutting ceremony for the refurbished customs vessel Searcher was held at the Police Marine Base on Friday. (Photo: ZARRIN TASNIM AHMED)

Five law enforcement boats motored out of the Police Marine Base on Friday afternoon, celebrating the launch of the refurbished customs vessel Searcher.

The Searcher, which was refurbished and repurposed following the 2017 hurricanes, joins the vessels Predator, Vigilant and Fearless.

“During the last 20 years, the marine enforcement operations of customs had to continue, as the Virgin Islands is considered a transhipment point for transnational crimes: human trafficking, drugs, and bulk cash smuggling,” Mr. Smith said. “This meant that our officers had to perform dangerous local and international maritime operations utilising equipment — at that time — that was simply not up to par. This was embarrassing for me and life-threatening for our officers.”

He recalled one incident when equipment problems caused him and other customs officers to arrive late to a scene, where they witnessed a fatality.

“That event made me consider that had we arrived a moment earlier, the result may have been different,” he said. “We cannot spare costs when it comes to the safety of all law enforcement officers, especially at sea.”

Governor John Rankin also spoke, saying that he hopes to provide additional resources to the police and customs forces to aid in tackling issues like drug trafficking.

Premier Andrew Fahie noted his government’s commitment to providing similar support, and he thanked police, customs and immigration officers for their work during the pandemic.

He also acknowledged recent attempts to breach the borders that he said were “unsuccessful because they were detected.”

“We have also witnessed significant seizures of drugs, and arrests have been made in recent weeks,” he said, adding, “This is demonstrative of the capabilities of our local law enforcement personnel and institutions, but more importantly it shows the determination of our border protection officers throughout the length and breadth of all our local law enforcement bodies to do their jobs with integrity and impartiality.”

Boats from the US Coast Guard and US Customs and Border Protection arrived during the ceremony.