Christian MacDonald is showing residents how to build cocktails without professional equipment, and he’s doing it 100 percent remotely. “I decided that since there’s no work to be had, I …

END_OF_DOCUMENT_TOKEN_TO_BE_REPLACED 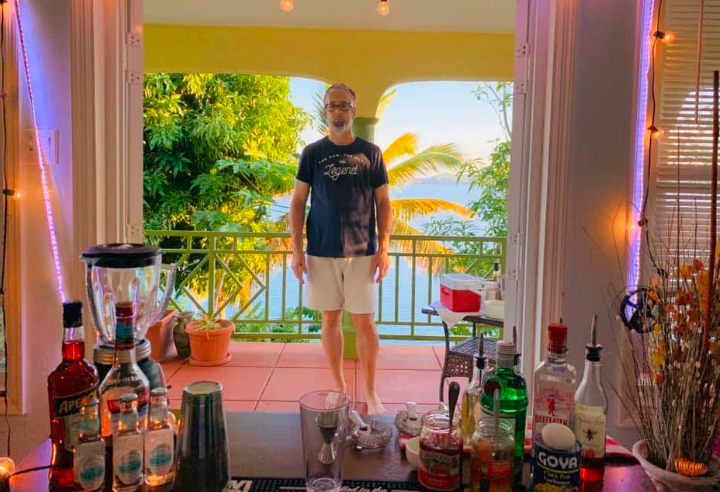 Bartender Christian MacDonald prepares to film himself demonstrating how to make another cocktail. He has been offering bartending lessons online during the lockdown. Other residents have been offering similar diversions. (Photo: PROVIDED)

Christian MacDonald is showing residents how to build cocktails without professional equipment, and he’s doing it 100 percent remotely.

“I decided that since there’s no work to be had, I figured I’d go ahead and offer my skills online,” Mr. MacDonald said.

The bartender, who gained a following of patrons while he ran Xtian on Main Street behind Island Roots, is now adapting to the changing landscape during the coronavirus pandemic.

On his Facebook page, he has been hosting live videos and tutorials on creating both alcoholic and non-alcoholic drinks.

“The idea was to show people what they could do with the things at home,” he said of his online show, which he has dubbed The Quick Cocktail Session.

At first, he would post pictures with information. But as he began to overcome being camera-shy, he said, he moved on to creating videos.

“It’s entertaining and it’s also an educational tool,” he added.

On Monday morning, he demonstrated how to make specialty coffees for all “isolationists.”

Mr. MacDonald is considering creating a bartending master class, and has begun offering online classes to anyone who is interested in learning.

During lockdown, he encouraged people to obtain new skills by studying and learning new things.

Community Mental Health Director Dr. Virginia Rubaine advised the same, and tells people to look at the situation like an “unplanned bonus vacation.”

Dr. Rubaine has been catching up on her reading, video-calling her friends and visiting museums online — and she recently discovered a green thumb.

“I’m sure we all have things to do. … The projects you’ve been putting off: Now is the time to do them,” she said. “There is so much we can do if we get creative.”

Amin Tarabay, owner of Island Tacos food truck, is showcasing his creative writing talents on Facebook with posts titled “Covid Chronicles.” The “storyline” takes place in Road Town during the coronavirus outbreak, but adds its own spin with zombie elements.

“It took an apocalypse to finally get me to Crystal’s,” he wrote. “I get out and after grabbing my machete I approach the club. It’s frustratingly dark inside. As I go inside and my eyes adjust, I finally get a clear picture of the carnage. The places is littered with bodies. Dollar bills are everywhere, but they’re not green anymore. I see red. Only red.”

So far, Mr. Tarabay has “chronicled” four days of his fictional lockdown, and he plans to continue.

“I’m planning on writing more. I was just a little busy with this three-day break that we got,” he said.

So far, he’s been getting good feedback from readers who are encouraging him to publish more.

“I’m an avid reader. I read every day. I always wanted to be a writer, and I found that these small serials are a good way to do that,” he said. “It’s an old format that was the main form of literature for a while … back in the 40s and 50s.”

While at home with his family, Mr. Tarabay said, watching Netflix or scrolling through Facebook gets tiring after a while.

“Sometimes it’s good to sit down and do something instead of just watch something,” he added. “When you see [movies or literature] locally, you’re more personally attached to it because it’s right here.”

Going out from home

The Royal BVI Yacht Club has begun hosting its weekly Wednesday quiz night online. Though the event usually starts around 7 p.m. on location, last week organisers began the trivia night after government’s address to the territory, which announced a shopping “system” during curfew.

VI musician Al Broderick has used Facebook to host live concerts from his home called “The Lockdown Sessions,” where he’s encouraged people to pour themselves a drink and enjoy his shows.

As he performs, viewers cheer him on by typing comments on his page.

“I love doing this,” he wrote, while assuring viewers that more sessions are to come. “So many familiar names just … out in the ether.”

Many residents also have taken the time to try new things like baking. Throughout the territory, and internationally, people have embraced baking bread as a hobby. CBC News reported that baking aisles in Canada have been emptied, and KTVU San Francisco also noted the prevalence of baking bread “in the age of the coronavirus.” The New York Times has termed it “stress-baking.”

If there’s one piece of advice Mr. MacDonald would give the territory, it’s to remain calm and stay focused.

“I think because a lot of us went through Irma, a lot of us are calm and cool and kind of just waiting things out,” he said.