As he rushed to class last Tuesday afternoon, senior Devonte Sprauve didn’t speak very highly of his first day back at Elmore Stoutt High School. “The building is claustrophobic,” he …

END_OF_DOCUMENT_TOKEN_TO_BE_REPLACED 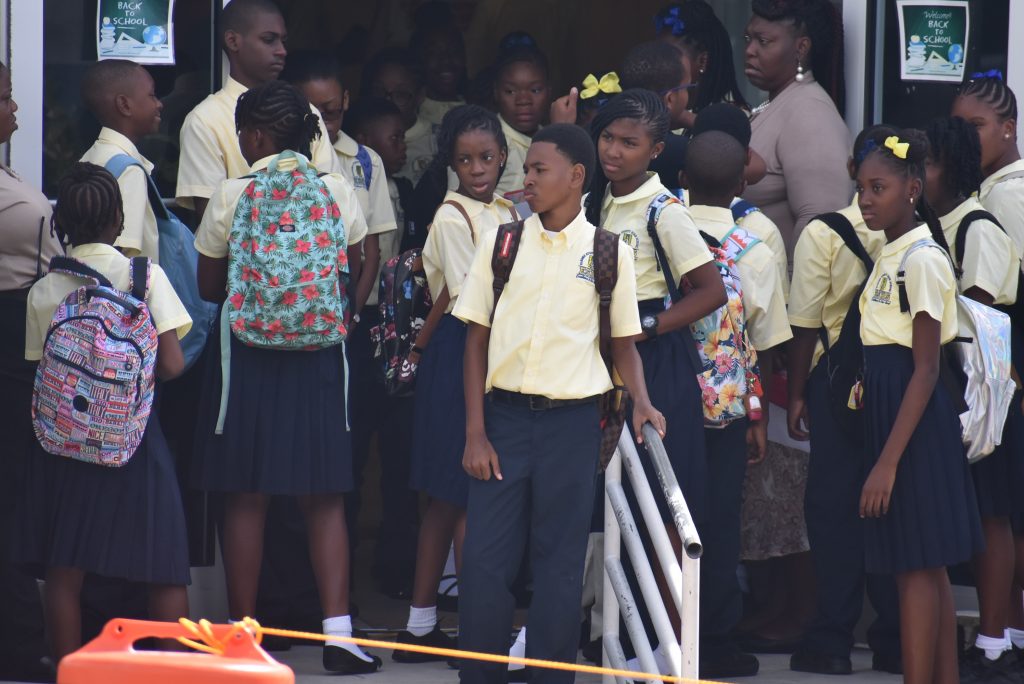 Teachers direct junior students to class in front of Elmore Stoutt High School on Monday morning. They continue to attend on a shift system, with older students attending in the afternoon. (Photo: CLAIRE SHEFCHIK)

“The building is claustrophobic,” he said of the temporary facility set up in the former Clarence Thomas Ltd. in Pasea. “I had a claustrophobic attack.”

His friend Samantha Smith agreed that the closed-in spaces are less than ideal, especially when compared to the open-air atmosphere of their former school building, which was gutted during Hurricane Irma and has not yet been rebuilt.

As the government struggles to rebuild ESHS, students once gain must cope with the system devised after Irma to save space. The L-shaped ESHS build- ing originally was slated to be repaired by this month, but now the project has been pushed back.

In June, Education and Culture Minister Myron Walwyn blamed the delay on the fact that the rebuild is to be funded by the Caribbean Development Bank loan package, which he described as a “vigorous and time-consuming process.”

At a press conference about two weeks ago, Premier Dr. Orlando Smith said work on the building is anticipated to be complete in early 2019. Elsewhere in the territory, such as at Bregado Flax Educational Centre, students are still attending class in temporary structures while repairs continue.

This week did deliver one piece of good news for students: The long-awaited repairs to Leonora Delville Primary School in Carrot Bay were complete by Monday. Mr. Walwyn confirmed on Friday that the school — whose students had been attending classes under tents in Cappoons Bay — was ready for occupancy.

“We have a few more finishing touches, most of which can be done without any interruption to our students,” he wrote in a Facebook post. “I remain grateful to our teachers, parents and students for their patience during this difficult period.”

The status of the school has become contentious in recent weeks as Opposition Leader Andrew Fahie (R-D1) recently threatened to “revolt” if work on the school, which is located in his district, wasn’t finished by the beginning of the year.

Last Thursday, he released a statement reading, “From the inception, my only concern was to get the children and teachers of the LDPS in a healthier working and learning environment. I have supported the school in so many
ways while they were under the tents and before, without looking for public recognition.”

Mr. Walwyn explained in a statement last week that the project had experienced many setbacks, including lack of materials.

He added that electrical works were being completed and the painting of the interior and exterior of the school was under way.

For the time being, students from Ivan Dawson Primary School in Cane Garden Bay will continue to join their peers at LDPS, though their school has been mostly repaired thanks to help from international volunteers from the organisation All Hands and Hearts.

Recurring issues of flooding, however, delayed plans for their return.

“It was our desire to have the school completed, and the volunteers working there had assured us that it would be completed for the opening of school,” said the minister, “but with the recent flooding I would rather have our students in an environment free from flooding, and therefore we are working on getting this rectified as best we can.”

Private donors have stepped up to fund other schools. Robinson O’Neal Memorial Primary School on Virgin Gorda has been rebuilt with a larger, hurricane-resistant space thanks to Oil Nut Bay’s North Sound Foundation. The school is “air-conditioned, WiFi enabled and include[s] a solar array and storage battery to offset its energy consumption,” said the foundation in a press release.

On Monday, the minister posted a prayer on his Facebook page in which he asked God to give teachers wisdom as they faced the days ahead.

“I know that things may not always be easy for our teachers, but I ask that you give them the strength to overcome every challenge that they will face, because with you all things are possible,” he wrote.

Meanwhile this week, private schools were already in full swing, with music, new touches on campus, and even brand-new buildings greeting students upon their return.

Sept. 10 was also a memorable day for the students and staff of Ciboney Centre for Excellence in Virgin Gorda, who moved in to the first of two brand new buildings the school is constructing on its new site in Handsome Bay.

“We made it! It was down to the wire Thursday night, but our amazing teams of construction crews, staff, families and friends pushed hard to the end to ensure we were ready for Friday’s open house,” Principal Laura Fox wrote in a statement.

Back at ESHS, though, students were embracing the prospect of an indefinite wait. Asked when she thought her school might be complete, Ms. Smith quipped, “Maybe in the next 20 years.”

Added Mr. Sprauve, “Maybe when a new government gets in.”