For John Paul, a waiter at Marche in Trellis Bay, life during the Covid-19 pandemic will take some adjusting, but business is looking up. Hours before a full moon party …

END_OF_DOCUMENT_TOKEN_TO_BE_REPLACED 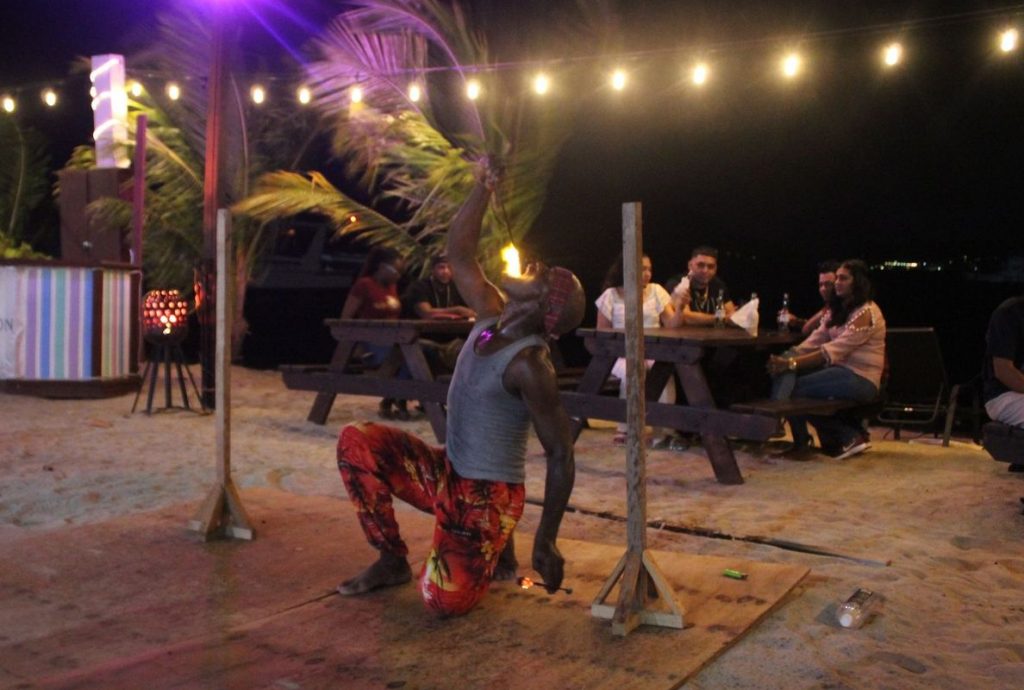 For John Paul, a waiter at Marche in Trellis Bay, life during the Covid-19 pandemic will take some adjusting, but business is looking up.

Hours before a full moon party on Sunday night — the first of its kind since February — Mr. Paul relaxed with his coworkers while preparing for a crowd later that night.

“For me it’s the new normal and we’re always sanitising our hands,” he said. “The customers need to wear masks on a regular basis.”

He didn’t think anyone would show up to the party wearing a mask since it would be difficult to drink, but most daytime patrons wear masks, he said.

Mr. Paul came to territory in February, a few weeks before the World Health Organisation declared the Covid-19 pandemic on March 11. Since then, he’s seen dramatic shifts in business.

“When I first got here, a lot of people were staying at home,” he said. “Business was good but not so busy. Not like other years, I think.”

With wood already packed in the fireplaces at Marche, and music bumping through the speakers, night rolled in and people began showing up to Trellis Bay. From the Trellis Bay Market Place to Jeremy’s Kitchen, events continued along the beach. Moko jumbies and live music didn’t happen this time around, but a fire-breathing performance kept guests entertained until the dance floor filled up, but few, if any, attendees wore a mask.

Over the past two weeks, the territory has slowly come back to life as events take off, often with social distancing, hand hygiene and other safety measures.

On Saturday, PAW BVI hosted a Paddle and Party event in Brewers Bay to raise money for the organisation. With an entrance fee of $30 per person, along with sponsorships and raffles, the event raised more than $4,000 to cover ongoing costs for pet care, including spaying and neutering, organisers said.

“This year we didn’t think that it was going to happen, but it did,” said PAW member Susanna Rice. “The event was great and there was a huge turnout.”

Forty-two paddlers and one dog went from Brewers Bay to Cane Garden Bay, where the event ended with an after-party at Paradise Bar and Lounge. The venue hosted a glow-in-the-dark paint party that same night.

Up the hill at Rudy’s Lookout on Friday, musicians showcased their talents during BVI Got Bars, hosted by musical collective OnlyUs. Artists Grim Reefer and GNDoe headlined, and Pak performed toward the end of the event along with other musicians. From 7-10:30 p.m., music filled the hills as dozens of people enjoyed the show.

Though few, if any, masks were worn, one of the event organisers said everyone maintained a respectful distance from each other to stay safe.

“Our agenda is to create boutique experiences for local talent and local creatives to come out and showcase themselves. We use that platform as a means to scout talent worth sharing with the world,” said Roland “King Paebak” Jarvis. “The crowd already has a great compliance in terms of keeping us safe while we’re drinking out there. It was a great experience coming out of corona just to get people and people who enjoy art back in the groove of doing their thing. A lot of people are trying to get back to normal.”

The group plans to keep hosting events on every first Friday at Rudy’s Lookout, and a showcase for producers called BVI Beatmasters every third Thursday.

Live Lif3 Entertainment hosted an outdoor drive-in theatre on June 27 and June 28, playing four movies over the course of the weekend. Guests were encouraged to remain in their vehicles while parked in front of a screen at the Festival Village Grounds.

Drinks and food were served to each vehicle throughout the movies.

Organiser Ahmad Mahoney said he tried hosting a similar event two years ago, but it didn’t take off. When he travelled to the United States earlier this year and saw the drive-in theatres there, he was inspired to try it again.

The event, he said, was successful, and it provided something that Mr. Mahoney thinks is needed.

“There’s a lack of entertainment for families on the island. We kind of tried to fill that gap for family entertainment,” he said. “We’re pushing for another one for this month. We’re planning on upgrading our screen and doing something about our sound as well. Our little touch was the service to the cars due to Covid-19.”

On Sunday, Brandywine Estate will host a Family Fun Day from noon to 4 p.m., providing a dunk tank, face painting and more. A regular Sunday menu and a traditional roast beef menu will be available along with a kid’s menu.

Events like karaoke, quiz night and darts tournaments are returning, while bars and restaurants remain open until midnight.