A beach that has been largely quiet since many of its amenities were destroyed by Hurricane Irma came back to life Saturday for the Josiahs Bay Surf Classic, which saw …

END_OF_DOCUMENT_TOKEN_TO_BE_REPLACED 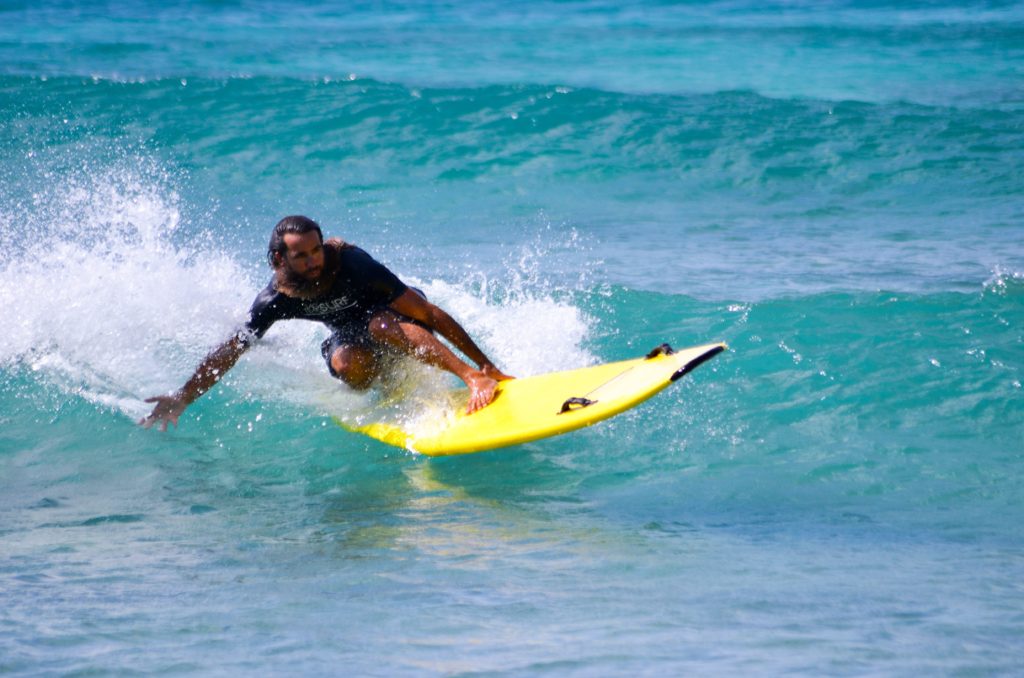 Steve Howes surfs his way to a first-place trophy in the under-40 men’s division at the Josiahs Bay Surf Classic. (Photo: Carolina Ansaldo of @new_beginnings_bvi)

A beach that has been largely quiet since many of its amenities were destroyed by Hurricane Irma came back to life Saturday for the Josiahs Bay Surf Classic, which saw a turnout of 200-plus despite a morning downpour and the early threat of no waves.

“It’s amazing. I was trying to count and I got to 160: I was like, what? I couldn’t believe it,” said Zoe Sorrentino, who helped organise the event along with Kezzia Gray and Surf School BVI owners Alex Dick-Read and Steve Howes.

Mr. Howes was also thrilled with the turnout.

“Perfect waves,” he said. “Couldn’t have asked for better, really.”

Mr. Howes himself emerged victorious in the men’s under-40 division, with his dog sharing his board for part of the ride.

He said that despite some early doubt about the weather, he was very happy with the event. The waves were small — around one to four feet — but that didn’t prevent competitors from showing off for the judges with headstands, jumps and other tricks.

Tiara Jones, winner of the women’s division, said she didn’t even think much about the competition while she was on the water.

“It was all about having fun with my friends,” she said.

The fun continued with live music from Al Broderick, a barbecue tent and bar, and fire dancers after dark.

At the end of the day, Mr. Dick-Read handed out some prizes to the winners, including hand-carved Balinese trophies, a trip on Dream Yacht Charters, and a new surfboard for Rush Broderick, the winner of the under-12 division. Flea Shaw took the over-40 division.

Ms. Sorrentino said the organisers initially feared the contest would be impossible because the day before there were no waves at all.

“Always with an outdoor event, there’s the weather,” said Ms. Gray, who also organised last month’s Anegada Kite & Paddle Festival, in which most of the kiting was called off due to a lack of wind.

She explained that the plan to host the Saturday contest sprang up right after the Anegada event, but they realised there wasn’t much time left in the surf season, which runs through April.

Mr. Howes added, “They were really pushing for this thing to go. I think after [Anegada Kite & Paddle] ended, they were really like, ‘We’ve got to do something.’”

The team added that they were encouraged to see so many people enjoying the beach, given that the surf school sustained heavy damage from the hurricane.

“It shows how much people love the surf school and want to help out,” Ms. Gray said. “There’s a real surf community here, and it runs from our parents’ generation and then all the way down to the young kids who are starting out now.”

During Hurricane Irma, the shipping container that housed much of the surf school’s equipment was washed inland. It has since been moved back, with volunteers coming unbidden to help rebuild and donations helping to replenish the boards and equipment that the owners lost.

“We came down in November and there was nobody here,” Ms. Sorrentino said. “But every day you’d come down and there’d be a new face. It just grew and grew.”

Although the Surf Classic has never been held on a regular basis, Mr. Howes said he wants to hold surf events more often — and especially get more children to enter.

On Saturday, the under-12 girls division was folded into the boys’ because of too few entrants.

“I don’t know if they were nervous or whatever, but next year they’re definitely going to join in,” Mr. Howes said.

Ms. Sorrentino said she hoped the event would contribute to the revitalisation of Josiahs Bay, and that the destroyed beach bars like Naomi’s Little Secret and Big D’s would get up and running in time.

“It’s like my mum says: Any community event, people flock to right now,” Ms. Gray said. “People just want to be around each other in a nice environment.”