Local News > A Virgin Islands twist on a holiday classic

A Virgin Islands twist on a holiday classic

END_OF_DOCUMENT_TOKEN_TO_BE_REPLACED 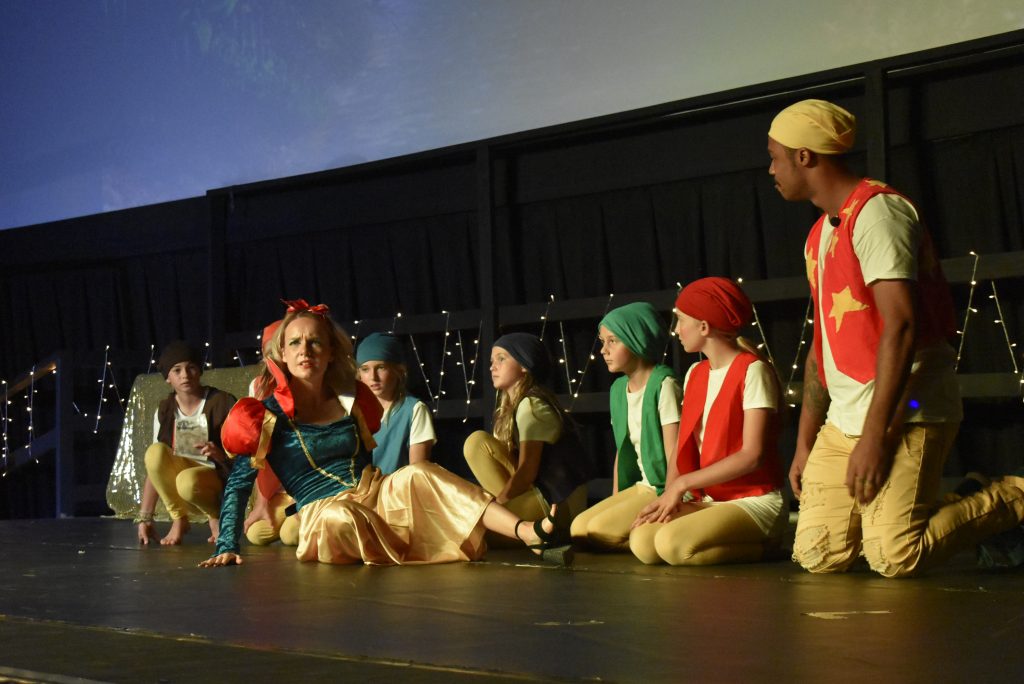 Last weekend, during stage director Claudia Knight’s rendition of Snow White, U.P.’s Cineplex brimmed with magic, as fairies, dwarves and princes gallivanted across the stage in a quest to save the poisoned princess. (Photo: JOEY WALDINGER)

More than four years later, the show finally went on, when her troupe of actors frolicked through the woods and broke into song on their quest to save the poisoned princess.

“I feel like I’ve brought a really exciting Christmas tradition that wasn’t here, and I’m just proud to have this,” Ms. Knight said.

The story of Snow White told in her production isn’t the one familiar to most people.

As a Christmas pantomime — a British tradition that reimagines classic fairy tales — last weekend’s performance at U.P.’s Cineplex strayed from the fable canonised by Walt Disney more than 80 years ago.

The medium, Ms. Knight said, allows a director an amount of “artistic licence,” which was on full display during the final showing Sunday night.

The script and set design were dotted with Virgin Islands references, a set of fairies narrating the play sometimes broke the fourth wall, and jeers from the audience were encouraged rather than forbidden.

When the evil Queen Caligula conspired with her right-hand woman Black Wing and a pair of assassins named Stinkwort and Bogwort to trick Snow White into eating a poisoned apple, the villains broke out into a spoof of BritneySpears’ song “Toxic.”

“Pantomime is basically over the top. … There’s no such thing as too much,” said Kitwan Maduro, who played Prince Fredrick, who saves Snow White with a kiss on the hand.

Ms. Knight started recruiting actors in August, sending out advertisements and telling just about everyone she knew, she said.

As the owner of a production company, Ms. Knight works in many different facets of the community, and by the time auditions rolled around she had attracted interest from people of diverse ages and backgrounds.

On Sunday, her characters were played by children and adults, mothers and fathers, teachers and firefighters.

“I think I’m really fortunate with my job,” Ms. Knight said, adding, “There’s such a variety of people I end up meeting.”

Most of the cast had one thing in common: no prior theatre experience.

Ms. Knight acknowledged that teaching a group of non-actors with such different lives and schedules was at times challenging, but as the once-weekly rehearsals got under way, she found that giving out basic tips, such as instructing the actors to project their voice and always face the crowd, went far in developing their presence on stage.

“Most of them had it in them anyway,” she said, adding, “Most of them just needed a little encouragement or direction.”

As one of the frontmen of the 3 G’s band, Mr. Maduro is no stranger to the stage.

But despite his love of performance, he was nervous for his audition, as he hadn’t acted since high school or been involved in a play of such scale, he said.

His nerves apparently had little impact on his audition, as he was given a leading role as Prince Fredrick.

Mr. Maduro struggled at first to embody his character, finding it difficult to let go of the timidity he felt while trying to balance his own personality and Prince Frederick’s.

That changed when Sarah Graham, who played the evil Queen Caligula, explained to Mr. Maduro that pantomimes are supposed to be fun and outlandish, and the characters should be played as such.

“She helped me bring the character to life,” Mr. Maduro said, before recounting her advice: ‘“Forget about Kitwan and just be Prince Frederick … and just have fun with it.’”

It was moments like these that helped Mr. Maduro form a bond with castmates he hadn’t previously known but has now come to think of as family, he said.

“I just became so close to them,” Mr. Maduro said, adding, “I can’t wait for the next one.”

Both Ms. Knight and Mr. Maduro said they felt a little trepidation before the weekend performances.

Covid-19 had surged in the final weeks of rehearsal, and after months of work Ms. Knight was unsure if the show would again be canceled.

And after seeing how much effort Ms. Knight had poured into the play, Mr. Maduro was anxious not to let her down.

But Ms. Knight’s passion and the rest of the cast’s dedication ended up serving as Mr. Maduro’s inspiration, he said.

Ms. Knight did not sell out the theatre as she had hoped, but she attributes that largely to some of the anxiety around the recent Covid-19 outbreaks, and is confident that she took the necessary precautions during the show to ensure everyone’s safety, she said.

Regardless of ticket sales, Ms. Knight considers the show a success, and is already looking ahead to next year’s show.