On Saturday four at-large candidates were chosen to represent the Virgin Islands Party in the upcoming general election. The VIP’s 76-member congress selected Sharie De Castro, owner of Write to …

END_OF_DOCUMENT_TOKEN_TO_BE_REPLACED 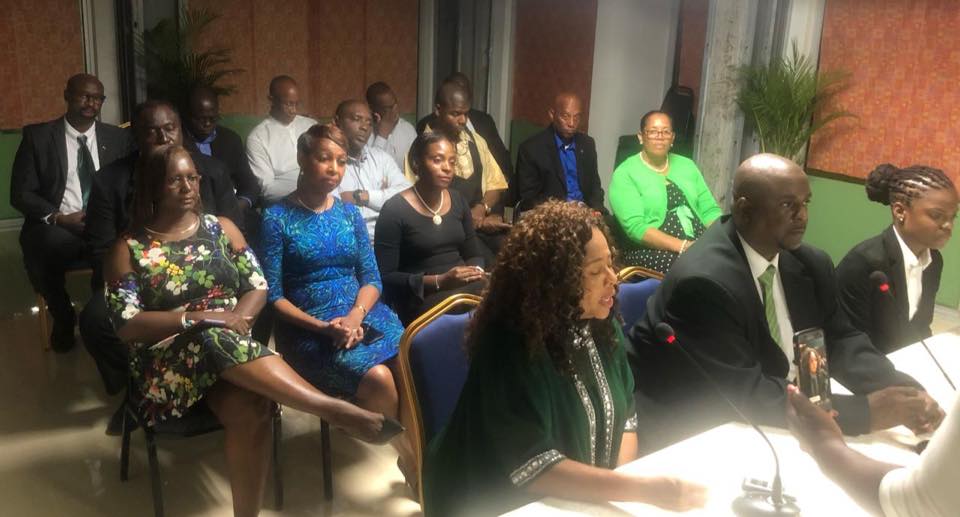 On Saturday four at-large candidates were chosen to represent the Virgin Islands Party in the upcoming general election.

Opposition Leader Andrew Fahie (R-D1), who is the VIP chairman, congratulated all nine people who had contended for the positions, calling them “more than capable.”

“We have moved from the laughing stock that was just being tolerated, now to a viable option for the people of the Virgin Islands this next general election, to one that’s going to be celebrated,” he said.

Six other candidates for the VIP were announced in July: Luce Hodge-Smith competing for the Fourth District seat, Kye Rymer for the Fifth, John Samuel for the Sixth, Natalio “Sowande Uhuru” Wheatley for the Seventh, and Vincent Wheatley for the Ninth.

At the time, Mr. Fahie, a long-time VIP politician, also announced his decision to run for re-election as representative for the First District, a seat he has held since 1999.

During a press briefing on Saturday night, Mr. Fahie claimed that the VIP is now the only political party with 13 members ready to contest the general election.

“I dare them now to call a snap election,” he said.

Each person vying for a VIP at-large seat was required to visit the nine district committees and speak on various themes: proposed solutions to the territory’s problems; how they would add value to “the proposed VIP legislative agenda, which has restoring of accountability, transparency, integrity and good governance at the forefront;” and the creation of new industries, among others, according to Mr. Fahie.

And on Saturday, each of the four newly chosen candidates was given a chance to speak briefly and answer questions from the media.

Ms. Flax-Charles noted that her decision to run wasn’t made overnight. Now that she has two children in college and one who is almost 20 years old, she said she knew there would be more time to dedicate to the cause.

“I pledge to work tirelessly, as I always do and I’ve always done, for the people of the BVI,” she said.

Ms. De Castro said she views herself as a symbol of the “youth vote,” which she said makes up the largest voting bloc.

“With the VIP I saw them as a bridge between the government — once we are elected — and the youth of the territory,” she said. “I believe that what the young people are yearning for is an opportunity to be heard. I think for far too long our votes have counted but our voices haven’t.”

Meanwhile, Messrs. Smith and Malone both received the highest number of votes: They tied with 58 votes each, according to Mr. Fahie.

Mr. Malone also took the chance to express his faith in the party and in Mr. Fahie.

“We are not blinded by the fact that we do have challenges, … and we will be faced with these from time to time, but it’s important that Honourable Fahie gets on the bandwagon immediately and makes sure that voices are heard,” Mr. Malone said.

Various contenders who did not win VIP at-large seats, including Virgin Islands News Online owner Julian Willock, were also given the opportunity to speak on Saturday.

Mr. Willock, who lost a seat by four votes, took a dig at the National Democratic Party.

“I’m asking right now that [the VIP candidates] be supported by the people. Because … any of the nine of us are better than any persons that NDP One or NDP Two would have presented,” he said, referring to the NDP and its recent offshoot, the Progressive VI Movement.

Zan Lewis, the news director at ZBVI Radio, asked Mr. Willock repeatedly if he was “disappointed” not to have won.

“No one likes losing, Zan Lewis,” Mr. Willock said. “But I am very proud of the four that were selected.”

The VIP congress includes 72 people who serve on one of the eight-member committees set up in each of the territory’s nine districts. The remaining four are the candidates who contested at-large seats for the VIP in the previous general election.

Besides selecting at-large candidates, the congress is responsible for deciding the party’s chairperson; choosing members of the party’s executive administration; and ratifying all VIP district candidates, among other responsibilities, Mr. Fahie has explained previously.