Local News > ‘What would H.L. Stoutt do?’ leaders ask

‘What would H.L. Stoutt do?’ leaders ask

END_OF_DOCUMENT_TOKEN_TO_BE_REPLACED 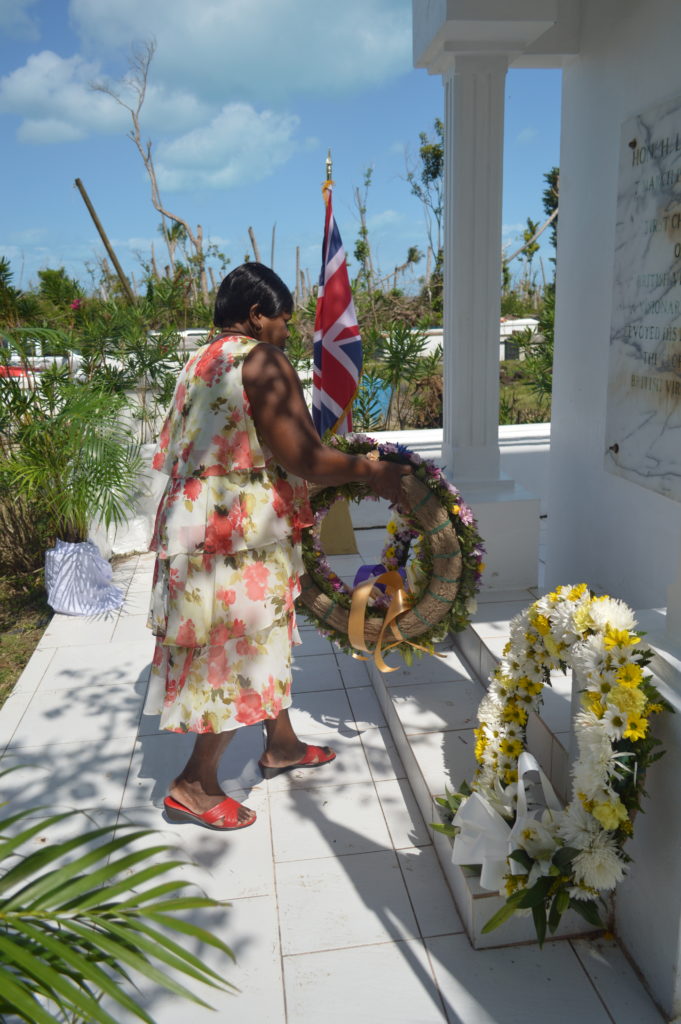 The first Monday in March is celebrated as a public holiday in honour of Mr. Stoutt, the first chief minister of the Virgin Islands, who served for more than 16 years and whose birthday was March 4. He died in 1995.

On the “auspicious occasion” — a phrase that the master of ceremonies, Cabinet Secretary Sandra Ward, noted Mr. Stoutt was fond of saying — held at the late statesman’s gravesite in Cappoons Bay, leaders wondered aloud what the answer to that question would be as the territory faces the monumental task of rebuilding from the devastation of Hurricane Irma.

“Six months after the passing of Hurricane Irma, he would be out there talking to everyone and asking for support to get our beautiful BVI restored to its former glory,” said Premier Dr. Orlando Smith.

He added that Mr. Stoutt did whatever he needed to do to raise funds, and would have not turned away financial help from the international community.

Dr. Smith also denounced the practice of sending foreigners away from the territory “unless they have committed a crime.”

The premier added, “Be careful what we say. … We can’t afford to lose our friends.”

He called the late chief minister a man of action and inclusiveness who “never forgot to say thank you.”

“He would have been proud of all the volunteers from here and abroad, of the voluntary organisations and all who sacrificed to give humanitarian assistance and support to the BVI in the time of greatest need,” the premier said.

The fruits of his labour

“He was born in March, and he never stopped marching,” Mr. Fahie said, adding that Mr. Stoutt also established the Social Security scheme and spearheaded the opening of the community college that bears his name. “And now future generations can enjoy the fruits of his labour.”

The opposition leader joined with Dr. Smith and a family representative by laying a wreath on the late minister’s grave.

The crowd, consisting of public officials, family members and other residents, many adorned in bright territorial dress, enjoyed the music of Zion Sounds, which debuted an original song with lyrics beginning, “September 6, 2017 was the worst hurricane that I’ve ever seen.”

The keynote speaker, former Deputy Governor Inez Archibald, said she did not know Mr. Stoutt politically, but instead as her Sunday school teacher.

She encouraged the crowd to sing along with one of his favourite hymns, “Pennies for Jesus,” which she said taught her that “everything belongs to God.”

Although she disagreed with Mr. Stoutt on many things, she recalled, he did not let that sour their relationship.

“If this man heard I did not vote for him, you’d never know it,” she laughed.

Education and Culture Minister Myron Walwyn agreed that Mr. Stoutt had what he called “a sweet mouth,” saying whatever he needed to persuade others to take his side. Nevertheless, Mr. Walwyn added, he put his individual ambitions aside for the good of the territory, and would have advised today’s leaders to do the same.

In jump-starting the two economic pillars of tourism and financial services, the minister said, Mr. Stoutt “began to engage people from other countries who came to these shores … to build the territory.”

According to Mr. Walwyn, the late chief minister, although he pushed for the diversification of the economy, also recognised the traditional importance of agriculture and that “each of us did our little part” to provide food.

Mr. Walwyn added that Mr. Stoutt was the inspiration for his plan to introduce school gardens and help encourage children’s interest in agriculture.

Carolyn Stoutt-Igwe, the permanent secretary in the Deputy Governor’s Office and a relative of Mr. Stoutt, capped off the morning by noting that in challenging times, Mr. Stoutt himself looked to the past and encouraged young people to learn about those who went before them.

“His words to the youth of this country were: ‘Despise not the ways of your forefathers, for in them are the seeds of all knowledge,’” she said.