The general election could come as late as April 16, but in a campaign meet-and-greet on Saturday on Jost Van Dyke, Virgin Islands Party Chairman Andrew Fahie (R-D1) predicted that …

END_OF_DOCUMENT_TOKEN_TO_BE_REPLACED 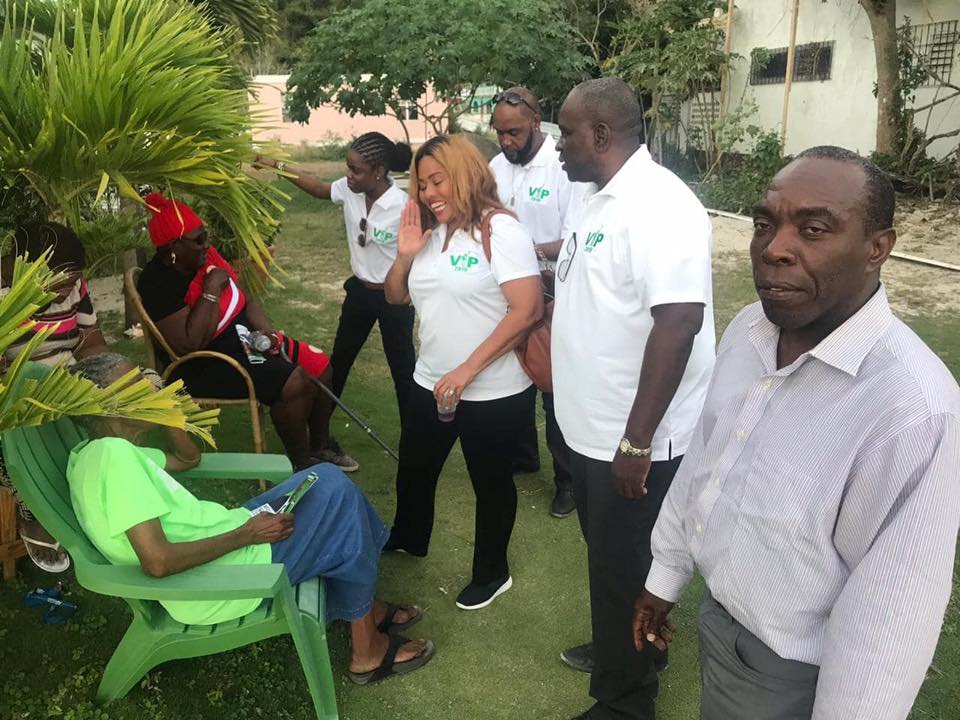 The general election could come as late as April 16, but in a campaign meet-and-greet on Saturday on Jost Van Dyke, Virgin Islands Party Chairman Andrew Fahie (R-D1) predicted that it would be set for Feb. 25.

“They can’t let it go on any longer because too many things will come out,” he said of the National Democratic Party-led government, which will choose the date. “So don’t make travel arrangements. If you’re going to leave here in February, stick around.”

The VIP held the event to introduce JVD voters to Carnel Clyne, a BVI Tourist Board official who is the VIP’s Second District contender, officially bringing the VIP’s total slate of candidates to 13.

In December, four at-large candidates were chosen to repre- sent the VIP when the party’s congress selected Sharie De Castro, owner of Write to Read; Shereen Flax-Charles, sister is- lands tourism development manager at the BVI Tourist Board; Carvin Malone, who served as VIP president for many years; and Neville “Sheep” Smith, former president of the BVI Softball Association and co-founder of Caribbean Security Limited.

They joined six other VIP candidates who were announced in July: Luce Hodge-Smith is competing for the Fourth District seat, Kye Rymer for the Fifth, John Samuel for the Sixth, Dr. Natalio “Sowande Uhuru” Wheatley for the Seventh, and Vincent Wheatley for the Ninth.

At the time, Andrew Fahie also announced his decision to run for re-election as representative for the First District, a seat he has held since 1999.

Mr. Fahie has claimed that the VIP is now the only political party with 13 members ready to contest the general election. However, as other contenders have pointed out, the line-up is relatively inexperienced: Mr. Fahie is the only one on the roster who previously has been elected to the legislature.

Platform details
In a press conference on Jan. 7 at Caribbean Broadcast Network studios, Mr. Fahie announced that his party has developed a “progressive platform for change and renewal,” to be unveiled “in various parts during the coming weeks.”

After the election, the first order of business will be to “review the books and know exactly where we are,” giving residents a “true picture” of the finances of the territory, he said.

“The reason we have the [Recovery to Development Agency],” he added, “is because of the lack of trust in government was there. We were not policing ourselves.”

He outlined his plan for a “land bank” aimed at encouraging youth to own land who may not otherwise be able to afford it.

The VIP plan for tourism, he added, will be to diversify, focusing on sports and medical tourism and attracting meaningful investments.

He also emphasised the need to “invest in the people” by bolstering existing industries with steps such as training residents to run megayachts and further developing agriculture, fishing and the performing arts.

D9 debate
At the event Saturday, Mr. Fahie criticised an unnamed “leader” for suggesting that each party leader debate, instead of holding individual face-offs in each district.

The VIP hosted a meet-and-greet for the media yesterday at Maria’s by the Sea, and an event for the Spanish- speaking community on Tuesday evening in the Cutlass Building.

The Beacon was asked to leave the meeting for Spanish speakers, which was publicly advertised, after being told it was “not a media event.”

However, Mr. Fahie spoke about the purpose of the event the next day, saying that the meeting with Spanish speakers is just part of the VIP’s plans to have
quarterly meetings that cut across broad sectors of the community.

“We believe that persons who have decided to make the BVI their home must have a voice in the affairs of the territory,” he said, adding, “This holds true for the Spanish-speaking community.”

Coming events
Youth forums are scheduled on Anegada and Virgin Gorda on Sunday and Monday.

Also on Monday, Mr. Wheatley will join at-large candidates to greet voters at the Catholic Community Centre on Virgin Gorda.