Local News > In a first, women win three seats in the House of Assembly

In a first, women win three seats in the House of Assembly

In the final moments of the election on Monday, Sharie de Castro sat hunched over, staring intently at the screen displaying the election results in the Multi-purpose Sports Complex. When …

END_OF_DOCUMENT_TOKEN_TO_BE_REPLACED 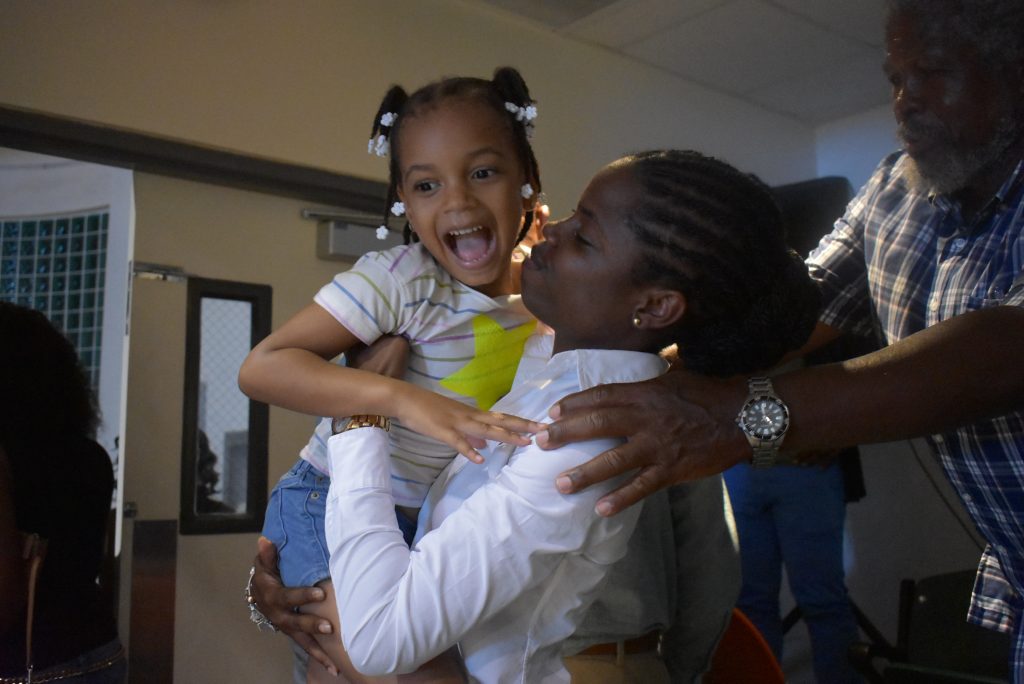 VIP at-large representative Sharie de Castro, 28, led the at-large candidates, becoming the youngest member of the House of Assembly and one of three women holding office simultaneously for the first time ever. (Photo: GENEVIEVE GLATSKY)

In the final moments of the election on Monday, Sharie de Castro sat hunched over, staring intently at the screen displaying the election results in the Multi-purpose Sports Complex.

When the announcer declared that the Virgin Islands Party had swept eight of the 13 seats in the House of Assembly, with Ms. de Castro leading the at-large candidates with 4,778 votes, she leapt out of her seat in the viewing box and embraced VIP Chairman Andrew Fahie, who is now premier.

She was immediately surrounded by friends and family members and soon by reporters jostling to ask her questions.

It felt “amazing”, the 28-year old said, to be not only the youngest member of the legislature, but one of three women holding office in the House of Assembly for the first time ever.

“Women have been doing their part in this territory for years,” she said. “I think it’s more than fitting for us to get to the House of Assembly to see how we can use our strengths to complement the men who have also worked very hard.”

“It’s exhilarating,” she said. “I don’t even know how to describe it. I really don’t.”

When Eileene Parsons first ran for office in 1983, she felt that voters did not take her seriously. She kept running in the three subsequent elections until she finally won one of the four newly created at-large seats in 1995.

That year Ms. Parsons and Ethlyn Smith were the first two women elected to what was then the Legislative Council. She would go on to be re-elected twice but said the male members of the council frequently made crude comments and reminded her that she was unwelcome.

“I had a difficult time my first year,” Ms. Parsons said. “Because I was strong.”

Since then, the Virgin Islands legislature has not seen more than two women at a time hold elected seats until Monday night when Mses. de Castro and Flax-Charles joined Sixth District National Democratic Party incumbent Alvera Maduro-Caines to make three.

Their victories mean that women now hold just over 23 percent of the seats in the HOA.

Ms. Penn said she was discouraged from seeking office when she first ran in 2007.

“I remember a man said to me ‘Ms. Penn, you shouldn’t be in this, you’re a lady. This is something for a man,’” she recalled.

She cited women’s status and responsibilities as caregivers, as well as societal norms, as reasons why more women don’t run for office, although she said she was encouraged that 11 of the 41 candidates on the ballot this year were female.

“It’s a very good thing,” she said. “I’m happy to see that and I hope it continues.”

She also said that her gender could be an asset on the campaign trail, as it made residents feel freer opening up to her. Ms. Flax-Charles echoed this, and said that the public sees women’s status as mothers in society as a sign of good leadership.

“A mother, whether she has two, five, seven children, we treat all of them the same,” she said. “We work with each one differently because of their personality, but we won’t give one of them food and leave the other one without.”

Ms. Penn added that while she was not ultimately elected she was accepting of the people’s decision and considered Ms. Flax-Charles’ and Ms. de Castro’s ascendancy as a sign of progress.

“I hope that the women shine,” she said. “I think they will. I think they’re all three powerful and capable women. I know they will do well.”

However, Ms. Parsons said the territory still has a long way to go, and that society still does not adequately recognise the valuable contributions that women can make as legislators.

“We still have a steep road to climb to acceptance,” she said.

She added that she was impressed by the intelligence and competence of the female candidates this year, but also saw that as further evidence of just how much more women have to prove to be considered on the same playing field as men.