“There are a lot of big deals in this room,” said emcee Kareem-Nelson Hull as he surveyed a conference room full of dozens of young Virgin Islands entrepreneurs at the …

END_OF_DOCUMENT_TOKEN_TO_BE_REPLACED 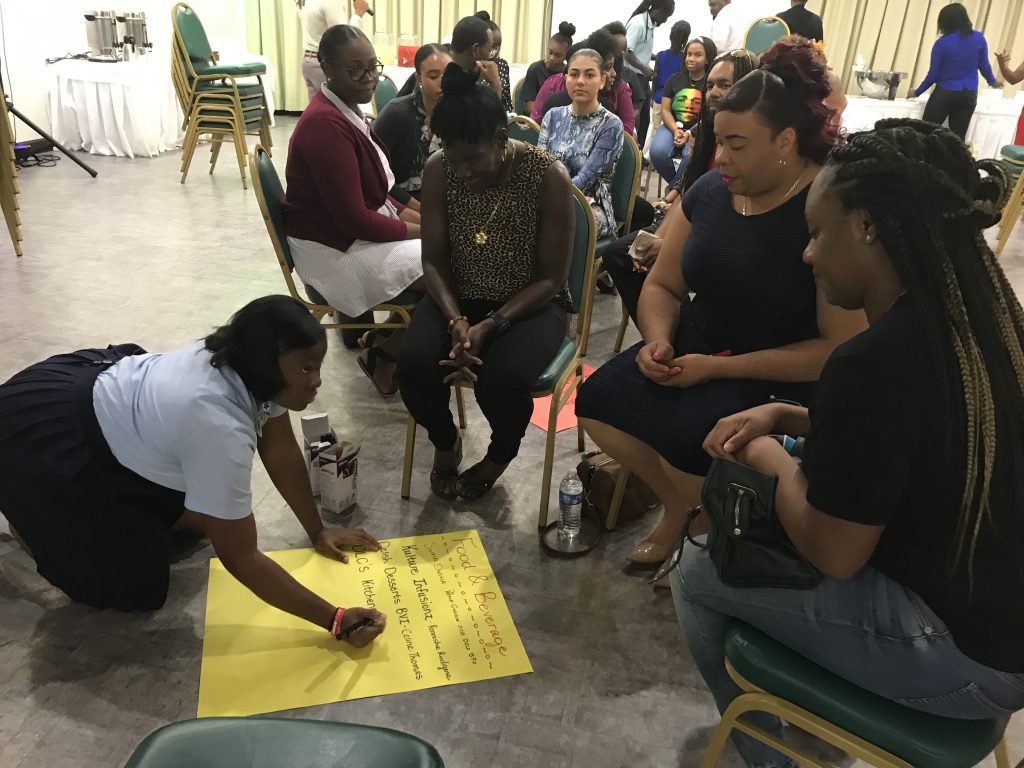 Young entrepreneurs make posts introducing themselves and their business during the Come Innovate forum on Tuesday. (Photo: CLAIRE SHEFCHIK)

“There are a lot of big deals in this room,” said emcee Kareem-Nelson Hull as he surveyed a conference room full of dozens of young Virgin Islands entrepreneurs at the Come Innovate business forum on Tuesday at Maria’s by the Sea.

They soon broke into 10 “tribes” based on their industries, ranging from “creative” to “food and beverage” to “professional services.”

Even those who didn’t yet own a business were happy to share their aspirations, including Michelle Rogers, who said she aspires to open a dive centre, sell dive gear and “teach underprivileged children how to dive.”

When the planned Innovative Business Lab opens next year, there may be more “big deals” where she came from.

According to Junior Trade Minister Sharie de Castro (R-at large), who is spearheading the lab project, the event on Tuesday was the first step in teasing out what young entrepreneurs — who she invited personally — want from their government in order to help them dream big and grow the economy.

“It is our duty as a government to do all that we can to ensure that businesses, especially new businesses and small businesses, feel supported and surrounded by tools that continue to make them feel like conducting business in the Virgin Islands is still worth it,” Ms. de Castro announced at a press conference on Friday.

Innovation Week, which continues through tomorrow, is just the start of Ms. de Castro’s vision for a new era of innovation in the territory.

Glen Charlton, another Tuesday attendee, is a veteran entrepreneur. His first venture was a music website, but “life hindered me from getting the website to where I wanted it,” he said.

His current dream is to take an old industry in the VI — tourism — and open it to a new form of tourist: gamers.

“Video games bring everyone together,” he said. “My end game is to bring that product to the VI.”

Another big dreamer was Akeela Frett. She already owns a hair supply company, but her ultimate dream is to own the “first hair manufacturing company in the BVI.”

The concept for the lab was first developed in 2016 under the previous government, Ms. de Castro said.

Those plans were disrupted by Hurricane Irma, although Ms. de Castro said she was amazed at how far along the idea was when she took office earlier this year.

“A lot of the groundwork has been done in terms of the planning and the paperwork,” she said. “What we must do now is move it forward and make it actionable.”

At the conference, acting Premier Kye Rymer said that innovation will play a vital role in diversifying the VI economy in light of a spate of existential threats to its traditional industries.

He noted that the concept of “economic substance” is looming large both in the financial industry and in the economy of the territory in general.

I-Week, and the lab to follow, will “provide a platform to gain a greater understanding of how we can integrate [economic substance],” he said.