On Boxing Day morning, Steve Howes, co-owner of Surf School BVI, wasn’t sure how many people would show up to the surfing contest scheduled for that afternoon. He initially had …

END_OF_DOCUMENT_TOKEN_TO_BE_REPLACED 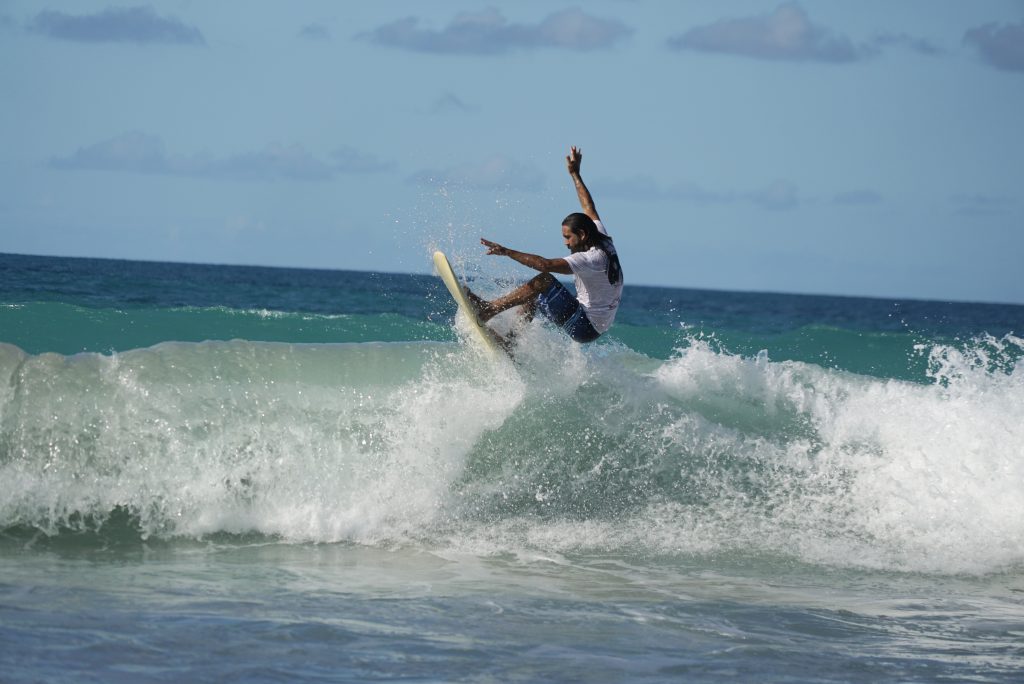 On Boxing Day morning, Steve Howes, co-owner of Surf School BVI, wasn’t sure how many people would show up to the surfing contest scheduled for that afternoon.

He initially had planned to post about it on social media and hang posters at schools, but when Covid-19 cases started to rise before Christmas, he decided to forgo advertising and keep the event small.

Nevertheless, “the coconut word of mouth,” as Mr. Howes calls it, was enough to draw enough competitors for a good day at the beach.

“I’m really happy with how the event went, considering what the vibe is right now on the island with Covid,” Mr. Howes said.

Surf contests held at the East End beach have always been a popular draw for Virgin Islands families, and in the past they have also attracted competitors from as far as St. Thomas and Puerto Rico.

After the pandemic forced Mr. Howes to cancel the planned 2020 contest, many people were asking when the next one would take place, so he resolved a few months ago to run the Boxing Day event, he said.

Because he wasn’t sure about the size of the turnout, there was some confusion in the morning about who exactly would be competing and when the heats would start.

But with the help of organisers Adam Crook and Chesnee “Bobo” Cogswell, and a generous swell from Josiahs Bay, the day of friendly competition was soon under way.

Kids rode whitewash onto the sand, parents watched proudly from the beach, more experienced surfers pumped up and down the line, and at sunset about 40 people gathered in a circle and cheered as prizes were awarded.

“It’s just a fun community here. And it’s just a reason to get everyone down to the beach,” Mr. Cogswell said, adding, “Luckily, the waves turned on. And yeah, it was an awesome, awesome day.”

Growing up a surfer in Cocoa Beach, Florida, Mr. Cogswell competed roughly once a month, and he said that being able to read the judges’ scores helped his growth as an athlete.

He hopes that by creating a VI surf federation with monthly contests and government support, he and other organisers can give surfers here a similar boost more often.

“I think we have enough kids here, … so it’s just fun to get it together and try to get it a little more organised,” said Mr. Cogswell, who won the men’s division.

During the Boxing Day contest, he worked to encourage the judges to watch every wave and keep track of how many each competitor rode, among other metrics, Mr. Cogswell said.

For a child spending hours in the water to further their surfing, it can be devastating to score a wave that goes unrecognised by the judges, he explained.

An organised surf league is not the only change Mr. Cogswell would like to see added to the VI sports community.

Over the summer, he and some friends built a skate ramp near the Josiahs Bay parking lot, on which he would like to host jam sessions during future years’ surf contests, he said.

Eventually, Mr. Cogswell aims to garner enough interest in skateboarding to raise funds for a concrete park and create a skate league akin to the one envisioned for surfing, he said.

With both surfing and skateboarding now recognised as Olympic sports, Mr. Cogswell hopes that creating official federations for both would help attract funding from the government to reach out to residents who shy away from action sports.

“Getting more local kids involved: … That’s kind of a goal of ours,” Mr. Cogswell said.

Both he and Mr. Howes said they were a little disappointed that more girls didn’t enter the Boxing Day contest, but Mr. Howes offered a piece of advice for anyone nervous about competing in the future.

“It’s not about winning,” he said. “It’s about who’s going out there and having the most fun, really.”