The Cayman Islands legalised same-sex marriage on Sunday, following a landmark Grand Court decision which ruled that preventing such unions violated the rights to a private and family life guaranteed …

END_OF_DOCUMENT_TOKEN_TO_BE_REPLACED 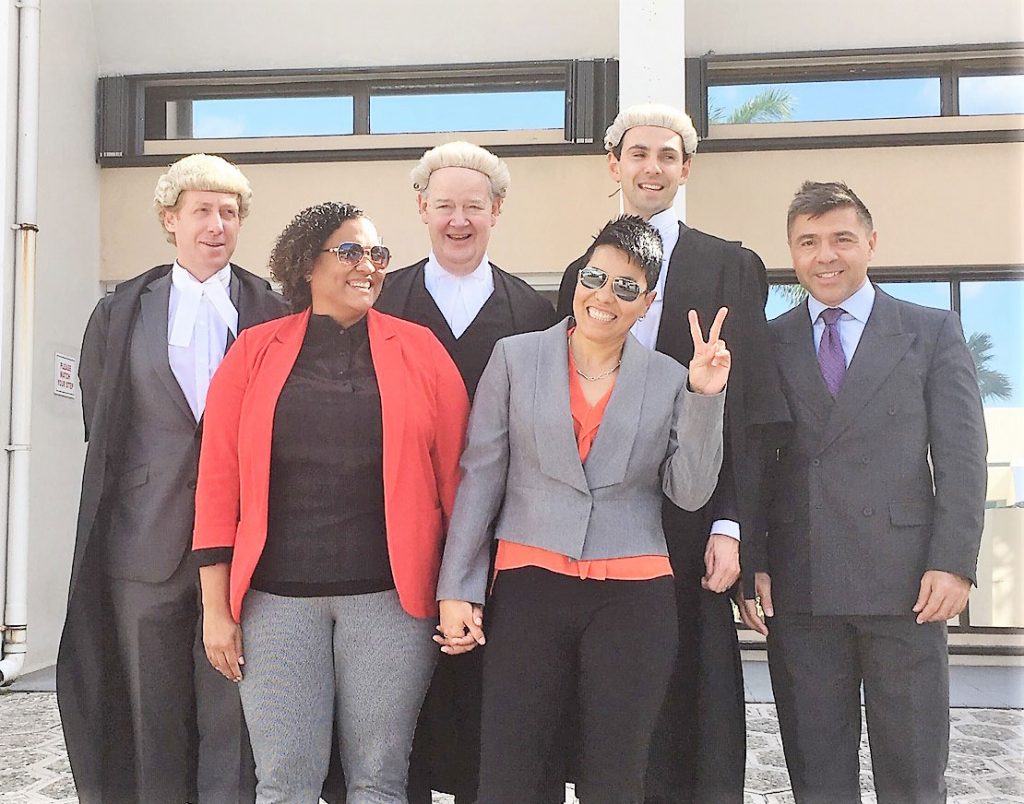 The couple who challenged the same-sex marriage law pose with their legal team in the Cayman Islands. The government is now challenging the historic ruling. (Photo: ALVARO SEREY/CAYMAN COMPASS)

The Cayman Islands legalised same-sex marriage on Sunday, following a landmark Grand Court decision which ruled that preventing such unions violated the rights to a private and family life guaranteed in the territory’s Constitution.

Lawyers for the lesbian couple who brought the case said the ruling could have implications for the wider Caribbean British overseas territories, including the Virgin Islands, according to Reuters, although Britain’s Foreign and Commonwealth Office said it has no plans to impose same-sex marriage laws as recommended recently by the UK Parliament’s Foreign Affairs Committee.

VI Deputy Premier Dr. Natalio “Sowande” Wheatley acknowledged that the ruling could have implications if the matter were brought to court in the VI.

“Whenever you have a ruling in the court, especially another OT, that certainly if it comes up here would be a frame of reference for anyone adjudicating on the matter,” he told the Beacon on Tuesday.

However, in the VI, the legality of same-sex marriage is not clear. Politicians and public officers have long stated that the practice is illegal, but there is no VI law that explicitly prohibits same-sex marriages or defines marriage as strictly between a man and a woman.

The VI’s Marriage Ordinance only prohibits close relatives and people under the age of 16 from receiving marriage licences.

Forms attached to the ordinance do include gender-specific terms, but it is unclear whether this fact would constitute a ban on same-sex marriage.

In the absence of an explicit ban, same-sex marriage would be legal, Jamaican lawyer and gay rights activist Maurice Tomlinson told the Beacon in 2015, shortly after the Supreme Court of the United States legalised gay marriage throughout the US.

“Under the law, what isn’t prohibited is allowed,” he said in an interview at the time.

Two VI attorneys — both of whom declined to be named because of the controversial nature of the issue here — told the Beacon at the time that even if gay marriage were prohibited in the Marriage Ordinance, the law likely could be successfully challengeable under the VI Constitution, which bans discrimination on the basis of sexual orientation and describes marriage as a fundamental right.

Section 20 of the Constitution states that marriage is a right, Section Nine declares that fundamental rights apply to all persons, regardless of sexual orientation, and Section 12 states “everyone is equal before the law.”

The Constitution also includes a clause similar to the one used in the recent Cayman ruling, guaranteeing the protection of private and family life.

Nonetheless, during a 2017 debate over the Marriage (Amendment) Act, Premier Andrew Fahie, who at the time was opposition leader, said the laws on same-sex marriage were clear.

“It’s not for any of us to decide whether we’re for or against marriage of the same sex, because our laws already make it clear,” he said. “The substantial law already states clearly: In the BVI laws, speaking legally, it’s not a recognised marriage in the British Virgin Islands.”

Then-Premier Dr. Orlando Smith and Attorney General Baba Aziz appeared to agree with his assessment, but when asked about the discrepancy none of the trio at the time responded with any legislative evidence that same-sex marriage is prohibited.

In the past, some VI residents have strongly opposed gay rights.

“We have to ensure the floodgates of decadence do not open to this,” said Methodist Reverend Charlesworth Browne when a UK Order in Council decriminalised gay sexual activity in the VI and other British overseas territories in 2000. “Evils are all around us, not just this one thing.”

But opinions in the VI may be changing.

In interviews with 284 Media during the recent election campaigns, several candidates who would go on to win seats in the House of Assembly expressed tentative support for gay marriage, while acknowledging the resistance in a predominantly Christian society.

“Everyone has a right to love who they want. That’s the reality,” said Junior Minister for Trade and Economic Development Sharie de Castro, adding, “I think that definitely will of course bring forth different messages within the community in terms of whether people are comfortable with it. We say that we are a Christian society so you automatically begin to pull on some various strings there.”

Junior Minister for Tourism Shereen Flax-Charles said in her interview that although she grew up in a Christian society in which she was taught that homosexuality was wrong, she feels differently now because of her gay family members and said that she “would support the choice.”

“At one point it was very hard to deal with, but then I said to myself, ‘They’re not any different to me or you,’” she said. “And it’s important that we allow persons to express themselves in whatever way they feel is right for them as long as they’re law-abiding citizens and they’re respectful within the community. I don’t have a challenge with it at all.”

“I am somebody who believes in people’s right to choose what they want to make them happy,” Mr. Walwyn said in his interview, in which he added that the issue should be left to a referendum. “I know we live in a Christian society and the views might differ. It might change over time as a new generation comes in.”

A report from the UK’s Foreign Affairs Committee in February recommended that the UK government set a date by which same-sex marriage legalisation should be imposed in the OTs, drawing widespread indignation from the VI.

Governor Gus Jaspert stressed at a press conference last month that the report came from one of several parliamentary committees and did not reflect government policy, but added that “the report speaks to the issue of every member of this society being valued and being able to live among each other in a fully unified and democratic society.”

Dr. Wheatley, the deputy premier, said this week that “moral issues” like same-sex marriage should not be forced on a society.

“You can in whatever way you can try to encourage persons or expose them to your values, but you shouldn’t take dictatorial measures to impose things which really should reside within persons’ moral compass and their own conscience,” he said.

The Compass reported on Wednesday that the Cayman government was appealing the chief justice’s decision.