In the weeks since the world watched a white police officer kneel on George Floyd’s neck for eight minutes and 46 seconds, the response to Mr. Floyd’s death has rightly …

END_OF_DOCUMENT_TOKEN_TO_BE_REPLACED 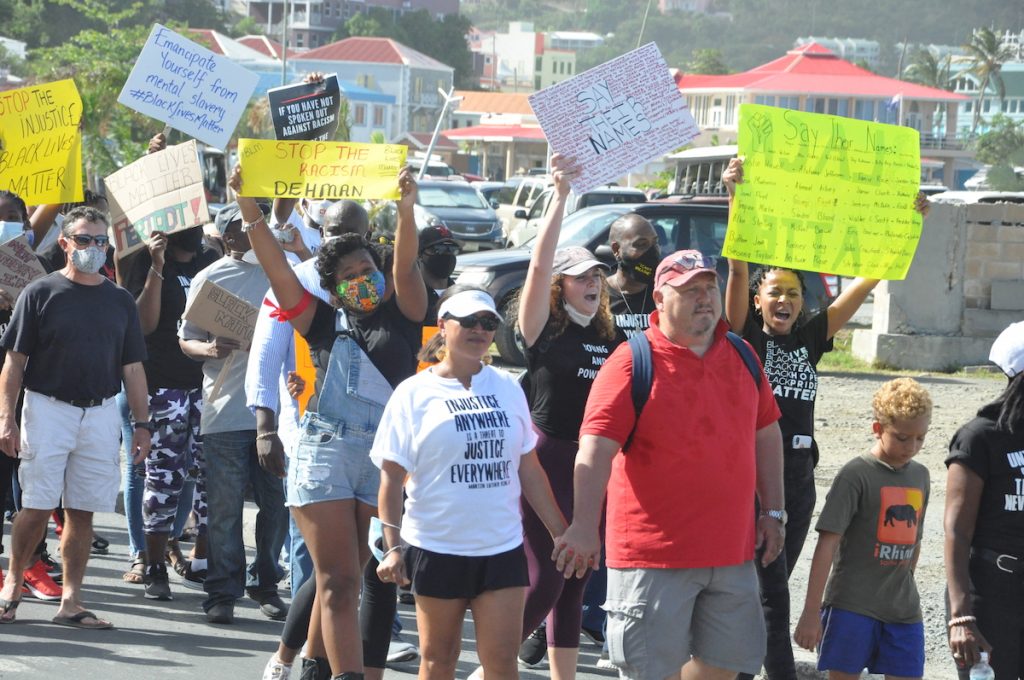 In the weeks since the world watched a white police officer kneel on George Floyd’s neck for eight minutes and 46 seconds, the response to Mr. Floyd’s death has rightly expanded rapidly into a global movement for racial justice.

We are pleased that the Virgin Islands is taking part.

The Black Lives Matter march through Road Town last month was attended by hundreds of people, and together with related activities it sparked badly needed conversations that we hope will continue in the community for a long time to come.

Though the racial issues here — where more than 75 percent of residents are of African descent — don’t precisely mirror those in the United States and other countries where white people make up the majority, the growing movement for racial justice is of crucial importance to the territory for many reasons.

Most obviously, perhaps, the VI’s close ties to the US and United Kingdom mean that the territory has a very personal interest in reform in those countries. Black Virgin Islanders often study, work and live abroad, and many have experienced exactly the sort of unacceptable abuse that resulted in Mr. Floyd’s death, as they recounted during last month’s demonstration.

The VI, like any society, also of course has an enormous stake in stamping out all discrimination at home, whether it be based on race, nationality or other factors.

But the territory’s fight against racial injustice is also a fight to confront a brutal history. Though slavery was legally abolished across the British empire in 1834 and the UK has rightly denounced racism and promised territories like the VI independence whenever their people are ready for it, the unfortunate ramifications of a terribly violent history continue to the present day.

In part because colonialism effectively erased much of the history of enslaved Africans, many students today are likely to know more about European colonisers than about the local heroes who resisted slavery here. Meanwhile, even some place names in the VI continue to honour this devastating legacy.

Identifying it and protesting often comes first. But across the world, people are also pushing for more.

They are calling for legislative reforms designed to protect black people and ensure racial justice in the present day, and they are also removing statues, renaming places and reexamining brutal histories that have been airbrushed by oppressors with an interest in covering up the collective sins of the past.

Here, the march and other recent discussions were important steps in the right direction, and we hope the ongoing dialogue will continue and expand as the VI considers how to bring about meaningful change.

To that end, the possibilities are many. As one way forward, we would suggest comprehensive education reform designed to reclaim the territory’s history by inculcating more VI-specific studies in all curriculums while greatly expanding the VI Studies Institute at H. Lavity Stoutt Community College.

Additionally, during the upcoming constitutional review, the community should ask itself whether historical injustice can ever truly be reckoned with as long as the VI remains a modern-day colony.

Community members should also continue to examine things they may take for granted, including the names of places. Why, for example, is the Sir Francis Drake Channel still named for a slave trader? Why not rename it in honour of our African ancestors who entered the VI through this waterway?

For similar reasons, public holidays should also be rethought. For instance, why not change Territory Day, which was observed on Monday, to Virgin Islands Day?

These are just a few examples of the sort of action that we hope will spring from the healthy dialogue of recent days.

Kudos to the organisers and participants who have helped light the way forward for the entire territory. We hope that meaningful reform will result.