The slow pace of the government’s hurricane recovery is nothing short of a crisis, and the resignation of Recovery and Development Agency CEO Paul Bayly is another major blow to …

END_OF_DOCUMENT_TOKEN_TO_BE_REPLACED 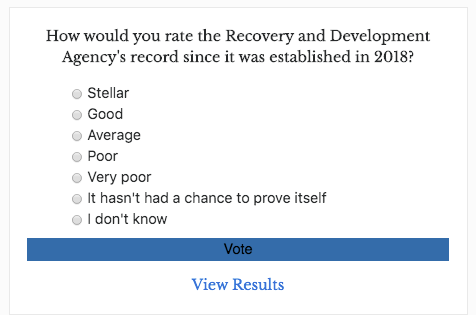 This editorial reflects our opinion. What’s yours? Scroll to the end to take our poll.

The slow pace of the government’s hurricane recovery is nothing short of a crisis, and the resignation of Recovery and Development Agency CEO Paul Bayly is another major blow to the increasingly beleaguered effort.

However, it comes as no surprise.

Mr. Bayly was hired to lead an agency that would administer a series of major projects worth more than $500 million.

Instead, he has overseen less than $10 million worth of project spending since he arrived in August 2018 because two successive government administrations have spectacularly failed to secure the necessary funding for the RDA.

Meanwhile, he has been unfairly attacked by Premier Andrew Fahie, who blamed the RDA for its lack of progress in an apparent attempt to distract from the government’s own failure to secure the United Kingdom’s £300 million loan guarantee or otherwise fund the agency. Though Mr. Fahie has been the premier for nearly a year, he is still in negotiations with the UK after his government proposed a new, scaled-down recovery plan that left much to be desired.

If we were in Mr. Bayly’s shoes, we might resign too.

However, this is not to praise his record. We were disappointed that he repeatedly has declined to be interviewed by this newspaper during his time at the head of such an important agency. Because of his silence, and because of the RDA’s limited opportunity to move ahead, we find it impossible to judge his progress.

What is not in doubt, however, is how much the territory is suffering because of the government’s failure to secure recovery funding, much of which is contingent on the existence of a functioning RDA.

The urgently needed projects are glaring, and progress in many cases appears to be non-existent.

The most recent disappointment came when the RDA shelved its effort to remove more than 200 derelict vessels from the territory’s waters after several companies bid for the project, which would have been the RDA’s biggest yet.

No explanation was provided — as usual, Mr. Bayly dodged the Beacon’s interview requests — but we assume that the agency simply couldn’t afford to follow through: As of Dec. 31, the fund that powers RDA projects contained less than $5.3 million.

The derelict boat delay is a huge disappointment, but it is just the tip of the iceberg.

More than two years after Irma, high school students are still attending class in temporary facilities, with no definite plan for what will happen next. Meanwhile, urgently needed repairs have not been completed on the Ralph O’Neal Administration Complex or at police and fire stations, among others, and construction has not started on badly needed new projects like the new National Emergency Operations Centre and the West End ferry terminal.

Libraries are closed across the territory, many hurricane shelters are not ready for another storm, the Pockwood Pond incinerator is not functioning, and roads that were hastily patched before the February election are falling apart again.

If this list sounds familiar, it is because we have been repeating it for many months.  Clearly, funding is needed to reinvigorate the stalled public-sector recovery.

The premier, then, should either expedite negotiations with the UK and secure the loan guarantee or he should announce an alternative means of sourcing the hundreds of millions of dollars that are so badly needed.

We continue to believe that the RDA — which was established by a law that Mr. Fahie himself voted for — is a sound mechanism for ensuring that public money is well spent.

After all, it was set up in large part to ensure that recovery funding is properly administered instead of being wasted through the usual political patronage and pork-barrel projects so often employed by the territory’s elected leaders.

To be clear, we do not relish the new debt or the additional UK involvement that will undoubtedly come with the loan guarantee. However, we see no other option at this stage.