Local News > ‘Enough is enough: Put the guns down!’

‘Enough is enough: Put the guns down!’

As night fell over Queen Elizabeth II Park on March 19, the pre-recorded voice of Ariana Wheatley rang out from an empty podium as she described the pain of losing …

END_OF_DOCUMENT_TOKEN_TO_BE_REPLACED 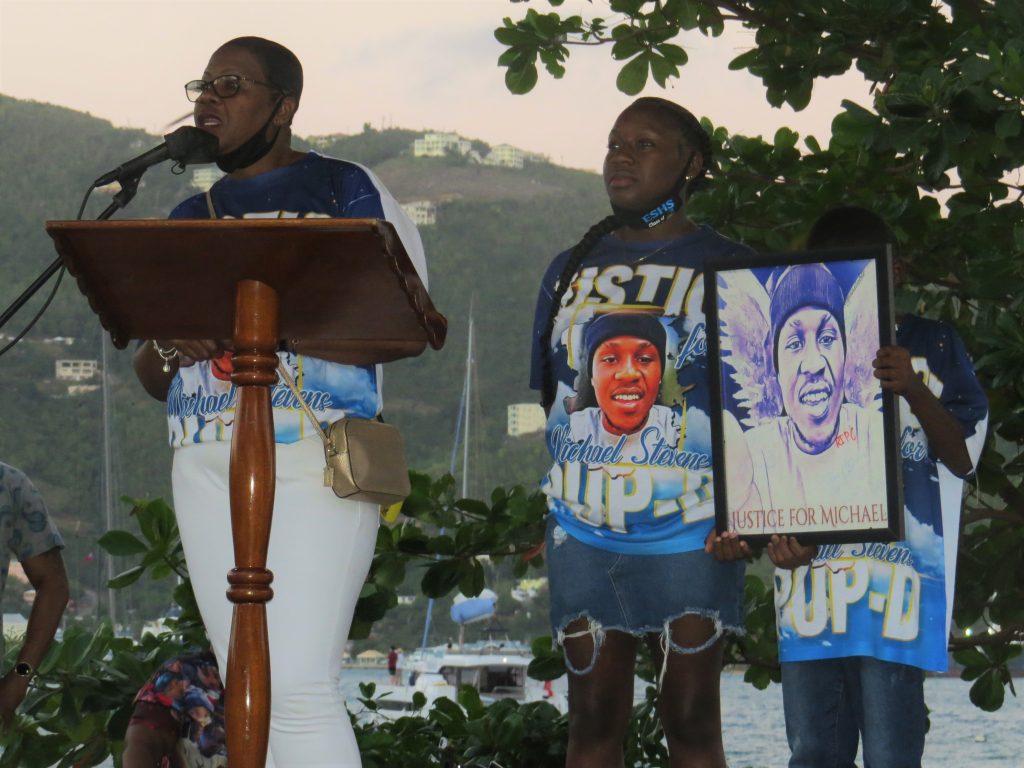 Relatives of Michael Stevens, who was shot and killed in a double homicide with Clevaughn Sweeney in 2018, ask anyone who knows something about the incident to come forward. They spoke during a vigil against gun violence held on March 19 at Queen Elizabeth II Park. (Photo: DANA KAMPA)

As night fell over Queen Elizabeth II Park on March 19, the pre-recorded voice of Ariana Wheatley rang out from an empty podium as she described the pain of losing her boyfriend, 24-year-old Clevaughn Sweeney, in a double homicide near Althea Scatliffe Primary School in 2018 — shortly before he planned to reunite with her and their daughter in Miami. 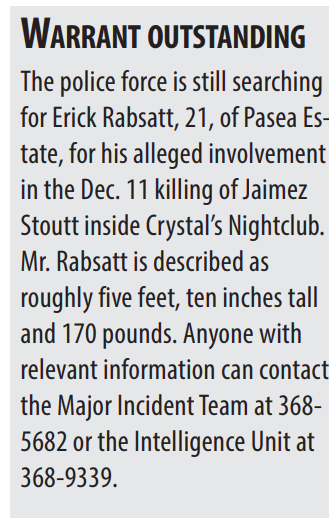 At the end of her reminiscing and her plea to stop gun violence in the territory, the voice of their daughter carried across the park, simply saying, “I love you, Daddy.”

Community members gathered on March 19 to unite their voices in speaking out against rising gun violence in the Virgin Islands.

During a vigil that centred around the recent shooting death of Jaimez Stoutt, family and friends of victims shared their stories, hoping to break what they called a cycle of violence and revenge driving such crimes.

Leaders including Police Commissioner Mark Collins said they are organising an amnesty gun collection drive and other measures to help get more guns off the streets. After community members shared their stories, they held high the light from their phones, lit sparklers, and released a cluster of white balloons to sail up over the hills surrounding Road Town.

Earlier this year, police issued an arrest warrant for Erick Rabsatt, 21, of Pasea Estate, for Mr. Stoutt’s shooting on Dec. 11 inside Crystal’s Nightclub.

Police asked anyone with information about his whereabouts or the crime to come forward, and community members kept looking for answers and using the hashtag #JusticeForJaimez on social media.

Mr. Stoutt was a United States Army veteran who served in Afghanistan and provided assistance to community members in the aftermath of Hurricane Irma.

He would have celebrated his 32nd birthday last Monday.

His mother, Joycelyn Leonard-Walters, said on Saturday that she felt compelled to organise the event to prompt action in the investigation and to amplify the voices of the families of Jaquan Thomas, Kendoy “Redz” Penn, Rodney Simmonds, Erran Charles, Kwanna “Kay Kay” Todd-Rhymer, Michael Stevens, Clevaughn Sweeney, Lovell Parker and other victims.

After observing a moment of silence, Ms. Leonard-Walters stood before the crowd and called for comprehensive improvements in addressing gun crimes.

“I told myself we cannot just sit back any longer and be silent,” she said. “Gun violence is a plague that seems to be slowly creeping into our community and becoming a norm. It’s time that as a community, we say enough is enough.”

She spoke of Mr. Stoutt’s attentiveness as a father and his eagerness to one day teach his son how to play basketball, growing emotional as she described the difficulty of accepting that he is gone.

Everyone in the community has a role to play in curbing violence, Ms. Leonard-Walters added.

She called on club owners and event promoters to be more thorough with their security checks; on the police to liaise better with victims’ families, to be quicker to post wanted people’s information, and to understand the delicacy of informants’ confidentiality; on the governor to allocate more resources for better investigative technology; on government to strengthen youth programmes and to update archaic laws with loopholes that in some cases protect perpetrators; on churches to help youths grow spiritually and become competent leaders; and finally on parents to encourage responsible use of social media and to set their children up for successful futures.

“I am nothing but a mother who has lost her son and worries now for the safety of not only her three surviving children, but also the children of the community,” she said.

Turning her attention to the suspected shooter, Ms. Leonard-Walters said, “I’m sure that you have had time to think about what you did and perhaps have some regrets.”

“I’m pretty sure that your friends are watching this, and I want to encourage you to turn yourself in. You will never live a normal life on the run.”

She asked him as a father to do the right thing.

The police commissioner also took the podium, noting that 79 murders have occurred in the VI since 2000, 42 of which have been solved.

Victims’ friends and family, many bearing the faces of their lost loved ones on T-shirts and signs, took turns at the podium to describe the ways such violence has affected their lives.

Broderick Penn, brother of Kendoy Penn, directed his comments to the people wielding the guns. He said while memories of his brother’s kindness, ambition, willingness to help anyone pursue their dreams, and ability to act as peacemaker in his family all run deep, those memories can’t replace the light of the life he lived.

“I want to say to the perpetrators of these crimes that when you take a life, you destroy multiple lives, and you rip families apart. You create pain. You destroy dreams. Kids grow up without dads. Girls don’t learn how to be loved, and boys are not taught how to become men,” he said, drawing applause from the crowd.

He continued, “Then when you exact revenge, you create avengers. Then we end up in a bitter cycle of revenge, violence and avenging. That’s happening right now in our community, according to the streets. It’s my solemn hope that for each of the many souls that we have lost so senselessly to gun violence, that we find justice for them, for the families and for the fabric of our country. It’s my even greater hope that all our family members that were taken from us will stand as beacons of conscience to the next person who is plotting, tempted, pulled or even pushed to pull that trigger to take someone’s life. Please stop the killing.”

Speakers also included Mareen Stoddard, the mother of Kawana Todd-Rhymer; Aretha Maloney; Ann Tillamook; and Winifred Stevens. They described many sleepless, dread-filled nights they’ve spent praying for answers in unresolved cases, and they urged anyone in the community who knows something to speak up. Their messages were echoed by musicians and religious leaders.

Organisers also played recordings from US Virgin Islander Roberto “Rabbie” Smalls, who served 25 years in prison in the US for murder and now spends his days encouraging young people to steer away from crime, and from Daisy Simmonds speaking in remembrance of Rodney Simmonds, who was allegedly shot on Feb. 5, 2021 and found dead in his home in Threadfall.

Police have released few details of the incident but said last month that the investigation was “very much alive.” [story continues below] 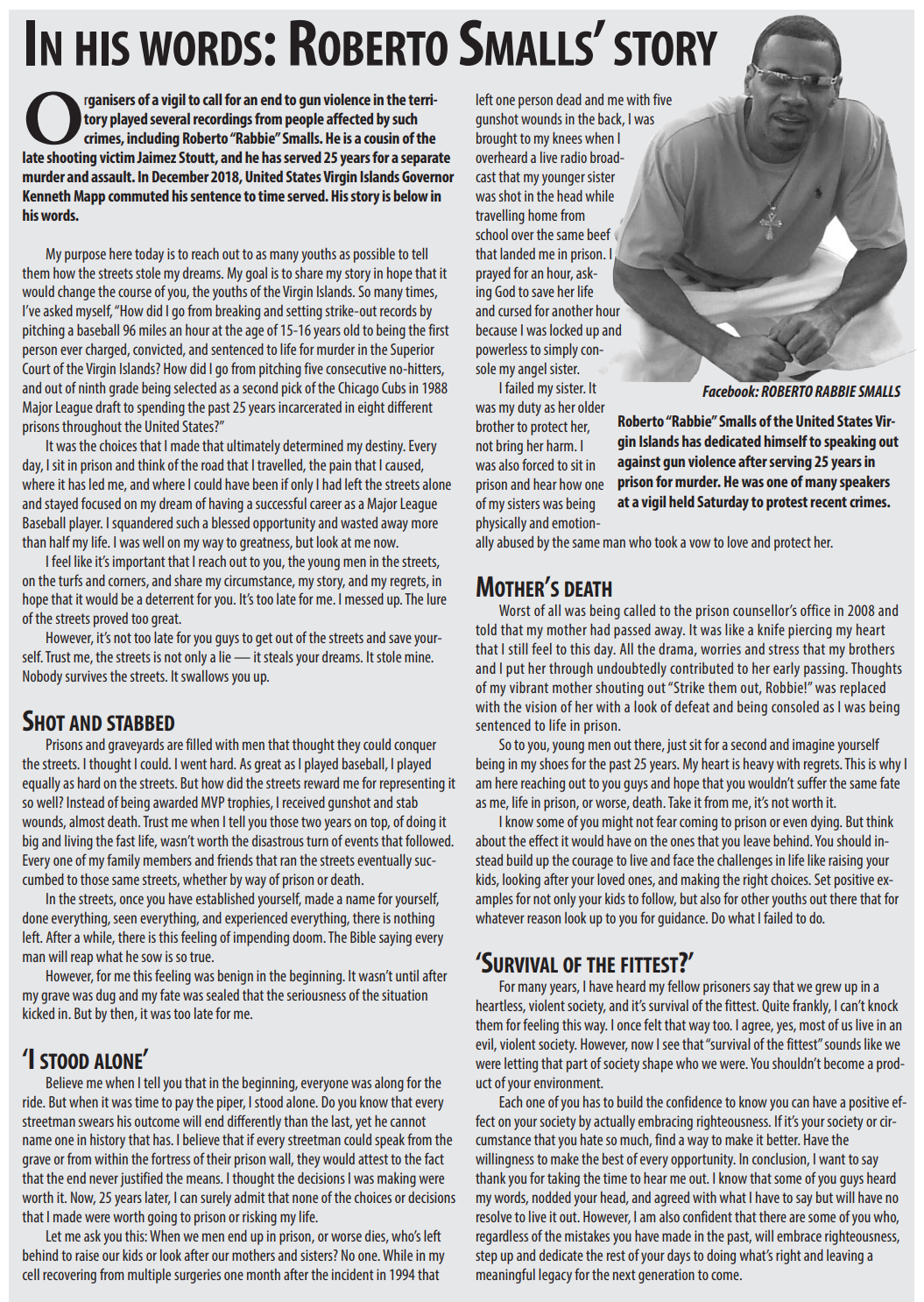 The police commissioner and Premier Andrew Fahie described the upcoming amnesty drive, saying it would last for two weeks and potentially be extended.

Anyone who has a gun will get the opportunity to hand it over to authorities without facing charges for possession, they explained.

Officers have seized nearly 50 guns “over the last few months,” Mr. Collins said. But he acknowledged there are more in circulation, opening the door to violence from even mild-mannered young people when disputes arise.

The commissioner asked the public to step up and assist officers with some of these unsolved cases.

“The answers are out there in the community,” he said. “It’s down to me to make sure that you’ve got the trust and confidence in the police service to come forward and speak to us.”

Mr. Collins said he wants to see justice for victims who have died senselessly, and he added that the police force would soon be launching a video series appealing for help with some older cases.

“Many of these unsolved murders need only one or two additional witnesses, advances in forensic science, or additional CCTV evidence to seal the case and bring justice and closure for you, the families,” he said.

He encouraged parents, teachers and other role models to work on communicating more closely with young people to ensure they have the support they need to make good life choices. As a demonstration, he repeatedly instructed attendees to hold up a hand, keep stepping closer, and pledge to “come forward to stop the violence.”

Mr. Fahie also offered details about when he was shot during a bank robbery back in 2015. He said he doesn’t often discuss the incident publicly, but he believed it was important to lend his voice in encouraging people to find hope even in difficult circumstances.

Non-profit organisations lent their support as well, with Rotarian Ryan Geluk stating that Rotarians would commence a series of projects geared toward peace in the community, including the creation of garden spaces to strengthen community ties.

Governor John Rankin offered condolences to Jaimez Stoutt’s family and pledged to work with the government and police to prevent more such tragedies.

“All of us need to work with the police, with government leaders, and with the community in bringing an end to the all too many losses of life,” the governor said. “We need to speak out against those involved in organised crime and illicit drugs, and those who are responsible for the violence that has occurred. There can be no excuse for it. Those individuals must be brought to justice, and be held to account for what they have done.”

Also speaking at Saturday’s event was Minister for Overseas Territories Amanda Milling, who visited the territory this week to discuss the relationship between the territory and United Kingdom and confer on Russian sanctions.

She shared her deep concerns about the recent shootings.

“The commissioner of police has briefed me on the murders that have taken place in the BVI, and I offer my full support in bringing the perpetrators to justice,” Ms. Milling said. “I hope the whole of the community in the BVI can come together to speak out against the senseless loss of life. Let’s work together to put an end to gun violence.”