During a Monday ground breaking ceremony, elected officials recalled childhood days when they would visit the Market Square in Road Town, where family members sold tarts and traded ground provisions …

END_OF_DOCUMENT_TOKEN_TO_BE_REPLACED 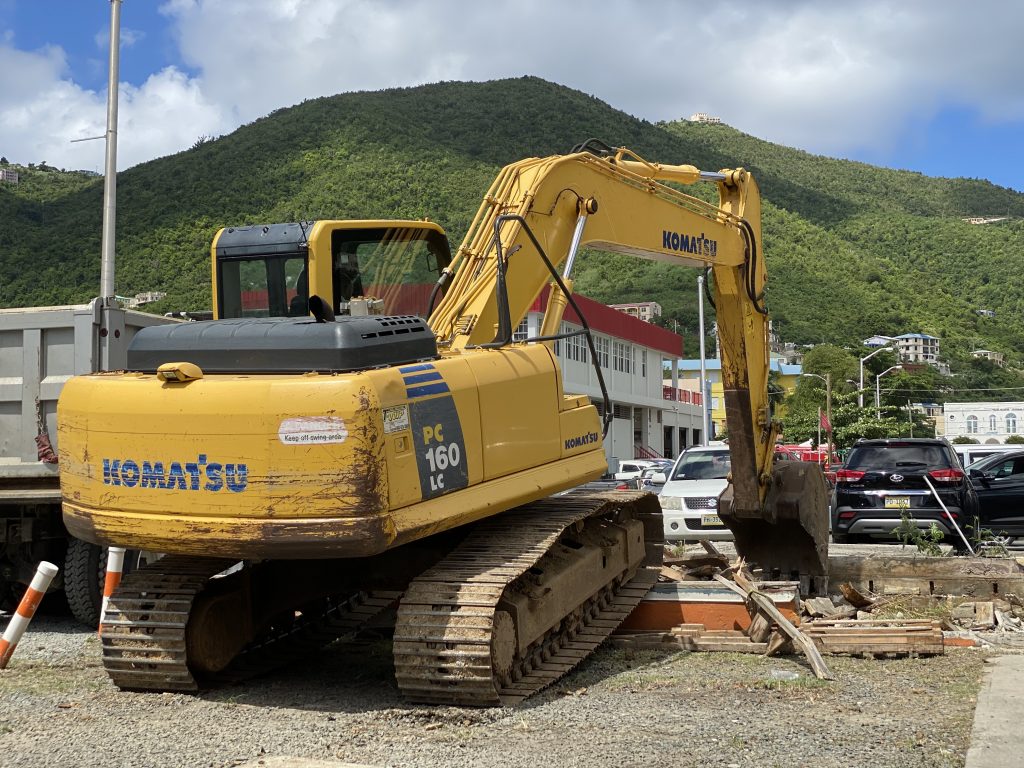 Heavy machinery got to work minutes after a ground breaking ceremony at the Road Town Market Square on Monday morning. Vendors have temporarily been relocated to a site by the nearby fire station. (Photo: DANA KAMPA)

During a Monday ground breaking ceremony, elected officials recalled childhood days when they would visit the Market Square in Road Town, where family members sold tarts and traded ground provisions and fish.

After years of delayed plans, the area is now seeing a major overhaul.

“Soon this place will be vibrant with the sounds of music, celebration, community gatherings, fresh produce, and a variety of food and retail items,” Transportation, Works and Utilities Minister Kye Rymer said at the ceremony.

About five years ago, he recalled, the Town and Country Planning Department reviewed its goals for furthering the development of Road Town, with an eye for projects that could be quickly implemented but would have long-term positive effects for the community.

“We had recognised that over the years there were a number of plans that were done for Road Town, but nothing really had been implemented,” Mr. Adams said. “So what we wanted to do was focus on things that could be implemented to make a difference.”

Mr. Adams expressed pride in knowing that most of the schematics of the Market Square plans were developed in house at Town and Country Planning, in partnership with the Ministry of Transportation, Works and Utilities. He added that the firm 3DE Limited created the final architectural drawings.

The minister shared his optimism about how this long-anticipated development would be a boon for the capital city, showcasing the area’s history. He said the square became a meeting ground in the 1970s as the fourth official marketing venue in the territory.

Mr. Rymer shared memories of visiting the market as a young man with his grandmother on Saturday mornings.

“We came with a vehicle packed of local produce, and we sold among the other vendors here at the market,” Mr. Rymer said. “Persons could find on sale a variety of locally grown produce, and fish captured by local fishermen.”

He also revisited memories of dancing in the square as a teenager to the tune of bands that would frequent the area.

“Over the years, the purpose and functionality of the space evolved into that of a local, daily vendors’ location,” Mr. Rymer said. “However, it is now time to add to the history books of the Road Town Market Square, and transform it into an emblem of a modern economic and social space, for both residents and visitors to enjoy.”

Other members of government also shared memories of the square, including Junior Minister for Tourism Sharie deCastro, who talked about her grandmother and great-grandmother selling homemade tarts at the market.

Vendors who typically operate from the Road Town Market Square have temporarily relocated to a site further down Fishlock Road near the fire department.

Opposition member Mark Vanterpool (R-D4), who represents Road Town, said he remembered when government held lengthy discussions concerning the future development of Road Town in the early 2000s, and he emphasised the importance of carrying forward that vision regardless of changes in leadership, financial constraints and criticism.

“We must continue to do what is the right thing, the best thing, for the city of Road Town,” Mr. Vanterpool said.

He added that he looks forward to the further development of a historic “Legislative House Avenue.”

Mr. Vanterpool also stressed the importance of the community taking pride in its institutions, and said leaders are accordingly focusing on developments that properly showcase the prominent places of the city.

He also called on government and fellow opposition members to support the continued beautification of the area.

Messrs. Rymer and Vanterpool joined Premier Andrew Fahie in wielding the first shovels full of dirt before the heavy machinery took over the work of tearing up the grounds. Junior Minister for Trade and Economic Development Shereen Flax-Charles said the project should be completed in nine months.