Drinkers, smokers and overnight tourists will all soon be subject to higher taxes, thanks to a pair of bills passed in the House of Assembly last Thursday. Legislators read, debated …

END_OF_DOCUMENT_TOKEN_TO_BE_REPLACED 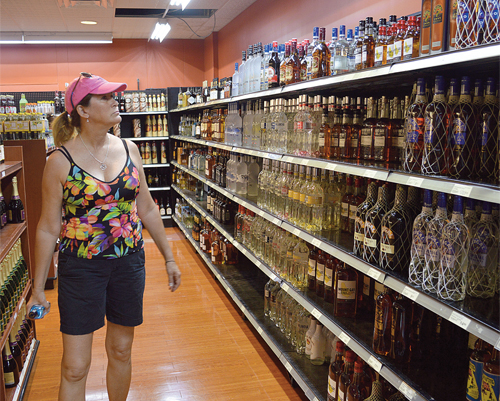 File photo: KEN SILVA A customer browses the liquor selection at the Rite Way in Pasea. Government passed a bill on Oct. 13 that increases the import tax on such products.

Drinkers, smokers and overnight tourists will all soon be subject to higher taxes, thanks to a pair of bills passed in the House of Assembly last Thursday.

Legislators read, debated and passed amendments to both the Hotel Accommodation (Taxation) Act and the Customs Management and Duties Act last week at HOA.

Each is a part of government’s larger revenue-generating strategy, outlined in Premier Dr. Orlando Smith’s Budget Address in January.

Both bills have had somewhat of a bumpy road to getting passed.

A new alcohol and tobacco levy was implemented in June via an order from Premier Dr. Orlando Smith, but revoked without explanation two and a half months later.

The hotel accommodation tax was read for the first time at an HOA session in June, but had to be re-read in September due to the House’s summer-long prorogue.

While both bills passed unanimously on Thursday, they were met with some debate from the two opposition members.

The Customs Management and Duties Act amendment will change the way alcohol and tobacco import taxes are applied: instead of charging a tax based on quantity like the Customs Department has done in the past, alcohol will now be taxed at 15 percent of its total value and tobacco at 25 percent, according to the most recent draft of the bill made public in the Gazette.

An even steeper alcohol and tobacco duty was previously implemented in June, taxing alcohol at 25 percent of its value and tobacco at 50 percent. However, in August it was revoked without explanation via an order filed by then-Acting Premier Dr. Kedrick Pickering.

While in committee on Thursday, legislators added multiple amendments to the bill, which have not yet been made public.

The hotel law will raise the hotel accommodation tax from its current rate of seven percent to ten percent.

The territory has had the same accommodation tax since 1984, according to Dr. Smith.

Archibald Christian (R-at-large), the junior minister for tourism, was the first to rise in support of the bill.

He explained that 17 jurisdictions in the region have an accommodation tax equivalent or higher than 10 percent.

Dr. Hubert O’Neal (R-D9) also rose in support of the bill, but said he thinks the government needs to add more clarity to it.

“I would like to point out that we need to classify what a hotel room really is. Yes, we have plenty of hotels in name… but we also have other classifications of what a hotel room is here in the Virgin Islands,” he said, listing villas, short-term apartments and yachts as examples.

Communications and Works Minister Mark Vanterpool agreed with him.

“We have to make it very clear, and implement it very [soon], that as long as you stay in the territory for a night, accommodation tax is due on paper wherever you stay,” he said. “And we have to find some to make sure it’s collectable.”

Mr. Vanterpool, using his own rough estimates for the number of overnight visitors per year, the average number of nights they stay and the average rates they pay, said he expects the tax to bring in about $28 million to the treasury every year.

He also said the current seven percent accommodation tax – which generated an estimated $5 million in revenue last year – should be collecting $19.6 million, if collections were done properly.

Mr. Vanterpool’s predictions – based on his own assumption that the average overnight tourist stays for seven nights and pays $200 a night – are in sharp contrast to the forecasts made in the 2016-2018 Medium Term Fiscal Plan, which estimate a yield of about $5.4 million in 2016, and just over $6 million in both 2017 and 2018.

Opposition Member Andrew Fahie (R-D1) warned that charging an accommodation tax on the marine industry could drive away boaters. He also questioned whether the government had sought enough input from professionals in the hotel industry, and criticized the lack of evidence and data brought to the House.

“How do we know on the flip side that it will not have a negative effect on the hotel industry?” he asked.