The Pockwood Pond incinerator is back burning trash after six weeks offline, but Health and Social Development Minister Carvin Malone came under fire in the House of Assembly last week …

END_OF_DOCUMENT_TOKEN_TO_BE_REPLACED 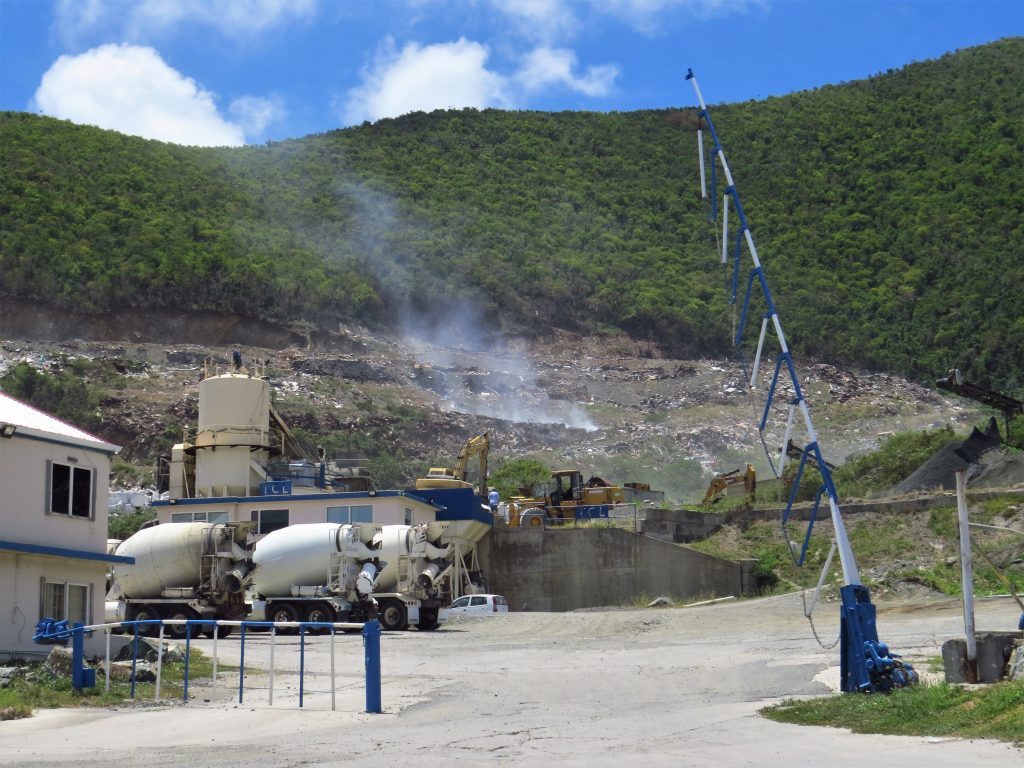 Wisps of white smoke carry over the grounds of the Pockwood Pond incinerator last week, where black clouds poured out the day prior from a fire. (File photo: DANA KAMPA)

The Pockwood Pond incinerator is back burning trash after six weeks offline, but Health and Social Development Minister Carvin Malone came under fire in the House of Assembly last week for longstanding delays in obtaining a pollution-control scrubber for the facility from a company in the United States.

In 2015, the previous government paid the Virginia-based Consutech Systems LLC a $500,000 deposit on the $1 million scrubber, which has been promised for more than a decade.

But in response to a Tuesday question from Opposition Leader Marlon Penn (R-D8), Mr. Malone echoed excuses provided in 2018 by officials under the previous administration. “Consutech is claiming that they gave a subcontract to a company for the scrubber,” Mr.  Malone said, adding that on a  visit in 2019 to the Consutech office, he was informed that the subcontractor had gone “bellyup, broke, … out of business.”

He added, “Consutech wants more money to be sent to them to find a replacement for this very scrubber. So this is why this date keeps moving. This particular contract was botched. We are trying to blow life into a  dead situation.”

Consutech still in the loop

Despite the closure of the subcontractor, the minister said his team is still working with Consutech, which also manufactured the Pockwood Pond incinerator, to find a solution to obtain a scrubber.

The ministry “is working towards having this matter fully rectified, and most honest, I could say, as soon as possible,” he said.

He added that his ministry is trying to get Consutech to honour its obligation to provide a scrubber without “killing” the company, which recently has provided the government with proprietary equipment including a replacement control panel that was needed to repair the incinerator after a fire damaged it in 2018.

“The only reason why we haven’t moved with more force is because Consutech is the very company that provided the electrical panel to get the incinerator back up and running,” he said.

“At one time, they said they had two or three major contracts and were going to use some of the gross profit from this to see if they cannot get this scrubber brought down to us. This is proprietary equipment, ordered by the very government from way back.”

Consutech has a tumultuous corporate history in the US stemming back to the 1990s, when its predecessor company, Consumat Systems Inc., declared bankruptcy following lawsuits alleging that at least one of its incinerators had serious design flaws and violated emissions standards.

After grappling with financial issues in the US, Consumat began targeting international markets for its future projects.

Here, government signed a $4.5 million contract for a new incinerator in 2004, and said the facility would likely be up and running within 15 months.

About five years later, the Consutech-manufactured incinerator was installed, but it didn’t come online until 2011.

On Tuesday, Mr. Penn and his opposition colleague Julian Fraser (R-D3) said they were tired of hearing excuses about the scrubber and called for Mr. Malone to stop stalling, or at least provide a clear explanation for the delays.

“You see the burning fires in the hills,” Mr. Penn said. “I know you’ve been [in office] two years, but the reality is that it is an urgent situation for persons who are living in the vicinity of those communities, and we’ll have to find a way collectively to bring some relief to those individuals, specifically the persons on the West End.”

Mr. Fraser, whose district includes Pockwood Pond, was even more blunt, saying that he had told Mr. Malone when the minister came into office in 2019 that in his opinion, the scrubber was “not going to happen.”

Meanwhile, the incinerator is burning trash again after being offline for about six weeks from the start of March due to a faulty hydraulic pump.

While it was down, residents complained frequently about the  fires and smoke from the landfill behind the facility. A replacement pump had to be shipped into the territory, a process slowed because of the pandemic, but it arrived nearly two weeks ago, and the facility resumed operations early last week.

The six-week shutdown wasn’t the first in recent years. In November 2018, a fire damaged the incinerator and left it non-functional for more than a year.

But in January 2020, the new control panel sourced from Consutech was installed, and the plant eventually resumed operations.

However, it still lacked the pollution-control scrubber, a standard safety device designed to filter harmful particulates from the incinerator’s smoke. Officials have been promising the scrubber since before the incinerator came online in 2011.

Most recently, Mr. Malone said in October 2019 that the scrubber would be in place in the first quarter of 2020, and Premier Andrew Fahie mentioned the plan the following month in his 2020 budget address.

But the scrubber was not installed as promised, and Mr. Fahie did not mention it again in his 2021 budget address last November. He did, however, promise a new incinerator and said that funds had been allocated to procure and assemble it.

On Tuesday, Mr. Penn also questioned Mr. Malone about the reason for the recent fires in Pockwood Pond.

Mr. Malone responded that the ministry does not practice or condone open burning at the landfill on the hillside above the incinerator, but when the facility is offline for long periods spontaneous combustion is more likely to ignite a fire there.

“The department will ensure that all untreated waste that is taken to the dumpsite is properly covered with an adequate amount of soil to help trap large amounts of methane gas from being released,” he said.

The future of the incinerator also depends on a national waste management programme, which has been repeatedly delayed as well.

Last year, Mr. Malone announced the completion of a waste-management consultancy with the Switzerland-based firm Agency Red — which he previously had said would draft a waste-management strategy for the territory — and he promised that a public consultation phase would start early this year.

The consultation hasn’t begun and the draft strategy hasn’t been released, but on Tuesday Mr. Malone said the public will learn more when consultations begin in “April and May.”

“Persons will be given the opportunity to provide feedback on how best, Mr. Speaker, to further get a proper waste disposal system in operation,” he said.

In response to another question from Mr. Penn, the minister said waste management officers have been receiving hazard pay for dealing with Covid-19-related waste.

In October 2018, he explained, Cabinet decided that certain waste management officers be classified as “risk officers,” entitling them to allowances and other benefits.

However, he said he did not know when payments were made, or what specific protocols the officers were following in order to dispose of hazardous waste.

“There’s a hazard equipment and supplies disposal protocol,” he said. “One thing is for sure, and we’ve seen this in the lockdown: The sanitation department, the waste management, the entire team have been up on ‘garbage mountain’ they call it, ultimately five, six times since we took office in 2019.

The workers there were glad  and pleased that I took the time to come up there, but I thought [the payments were] part of what was required.”

Attempts to reach Consutech representatives were not immediately successful.