In a move that cost taxpayers more than $2 million, Premier Andrew Fahie authorised the use of three barges owned by EZ Shipping for border security during the Covid-19 pandemic …

END_OF_DOCUMENT_TOKEN_TO_BE_REPLACED 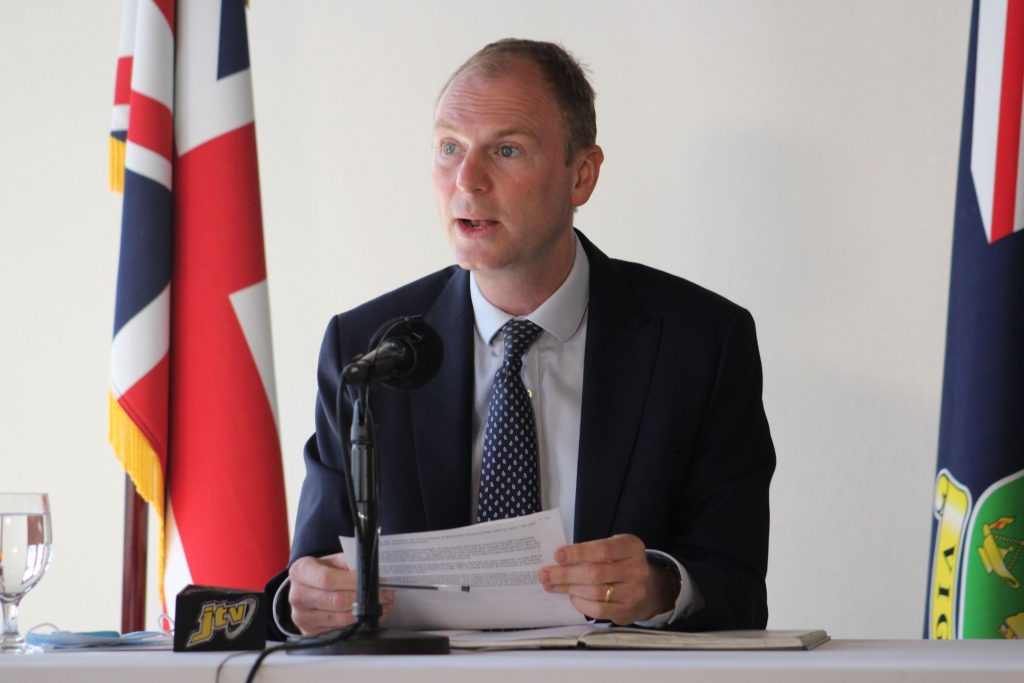 Governor Gus Jaspert — pictured here before his departure from the territory — testified in the Commission of Inquiry in October. (File Photo: ZARRIN TASNIM AHMED)

In a move that cost taxpayers more than $2 million, Premier Andrew Fahie authorised the use of three barges owned by EZ Shipping for border security during the Covid-19 pandemic without securing a contract first,
according to Governor John Rankin and his predecessor Gus Jaspert.

Other more cost-effective options were not sufficiently explored, the governors said in closed-door sessions during the Commission of Inquiry on Oct. 19 and 21, respectively.

Despite numerous concerns raised by the police commissioner, Mr. Jaspert, the Joint Task Force, and Customs and Immigration, the barges were used from August 2020 until March, according to the governors.

The barges cost $14,000 per day — money that could have gone toward procuring a radar system owned by the government or revamping marine police operations, they added.

Contracts were brought to the National Security Council and the Cabinet only after the barges were put in use and money was paid out by Mr. Fahie in his role as finance minister, they said.

The details were included in transcripts of the closed-door COI sessions, which were recently released. Videos of the private sessions still have not been made public.

Mr. Jaspert said in his testimony that there was no evidence to prove the effectiveness of the barges, no due diligence undertaken on the company itself, no ability to assess whether the amount was cost-effective, and no information provided to him on alternate options.

“The ability of the Cabinet to make a decision was severely restricted because the contract had already been verbally agreed, I believe, with EZ Shipping,” Mr. Jaspert said. “They had already started to undertake their work. The commitment had already been given to them.”

Furthermore, the option to bring in support from the UK to develop, train and boost local capability was “quite strongly resisted” by government ministers, he added.

Key information for the contracts was missing, such as who would have access to radar information and whether the crew was vetted, according to Mr. Jaspert.

“If we’re placing them with key responsibilities on national security, there were areas that raised concerns that had not been factored,” he said. “There had been a lot of pressure there to keep this contract going, despite, as I mentioned, the concerns that had been raised relating to it.”

Government shut the borders shortly after the pandemic hit last year, and it searched for ways to make sure there was surveillance around the borders, according to Mr. Jaspert, who testified on Oct. 21.

After the lockdown in March 2020, EZ Shipping sent government an unsolicited proposal offering barges for border security, he said.

Mr. Jaspert said that he wasn’t made aware of the proposal until after the barges were already in use.

A border strategy, he added, was already in place before the barges were used.
The Comprehensive Border Security Plan, with a three-to-six-month projection, was conceived in the aftermath of the pandemic by the JTF, police, customs and immigration, he said.

The plan was brought to the NSC and accepted during a special meeting on July 24, 2020. One of the priority spending areas listed two 24-hour radar platforms. The plan listed the need for radar without specifying who would provide it, Mr. Jaspert added.

On July 3, the Cabinet decided that the Border Control Task Force revisit proposals received from private vessel owners offering their boats to support control efforts, which would be considered by the NSC, Mr. Jaspert said.

But before any decision was made or any contract was signed, the premier authorised the deployment of three radar barges on Aug. 23, 2020 for a period of 60 days, according to the former governor.

The cost for three vessels during that timeframe was $840,000, COI Counsel Bilal Rawat said, citing documents provided to the COI.

On Oct. 19, Mr. Rankin told the commission that he did not believe the barges were cost-effective.

“I think the total cost of the barges amounted to over $2 million in the total expenditure, and I was unconvinced from what I had seen and advice from colleagues and from the police commissioner that there couldn’t be systems which would be at least as effective which would cost less,” he said.

Mr. Rawat brought up prior evidence given by the governor, who previously had said that there have been “a number of occasions on which Cabinet has agreed to waive tenders in awarding contracts which in [his] view have not involved exceptional circumstances justifying departure from the general procedures under the Public Finance Management Act.”

“‘On other occasions, it’s not clear that contracts have been awarded under any proper procedure or with any cost-benefit analysis: For example, the EZ Shipping radar contract, which to the best of my knowledge was not agreed by either the Joint Task Force or by the National Security Council prior to signature,’” the governor said, according to Mr. Rawat, who quoted the governor’s past testimony.

Mr. Fahie presented a paper to Cabinet in February which requested a retroactive payment, according to Mr. Rawat. The governor was told it would be the last contract for EZ Shipping and that government would develop its own platform, he said.

Mr. Rankin previously had questioned the value for money, citing the contracts as an “expensive venture,” according to Mr. Rawat.

“After receiving statistical re- ports from the Joint Task Force compared to the daily charges, you said you saw EZ Shipping’s detection rate of vessels as really low, and you asked whether the Cabinet was satisfied there was value in this venture,” Mr. Rawat said. “You supported moving ahead to a full radar system to ensure marine security, noting it would take a few months for implementation.”

Mr. Rankin was informed by a summary of Joint Border Patrol reports that in November, 12 vessels were detected and four intercepted with no court proceedings or fines.

In December, there was one detected vessel, three intercepted vessels and no court proceedings or fines. In January, the barges caught 16 vessels, intercepted 16 vessels, and fined one vessel.

Mr. Rankin confirmed during the hearing that government has been working on a proposal to put a “proper radar system in place” with assistance from the United Kingdom government. Meanwhile, maritime police are improving their capacity and training, he added.

The governor has previously requested that a coastal surveillance system for the Virgin Islands be procured using two separate processes.

“This is best practice for procurement of this type of sophisticated technological system,” he wrote in a memorandum to the financial secretary on April 8, according to Mr. Rawat. “It helps mitigate any design compromise or unsuspected contract variation.”

The approach was recommended by the UK’s Maritime and Coastguard Agency, according to Mr. Rankin.

He added that a meeting between the government and the International Association of Marine Aids to Navigation and Lighthouse Authorities was postponed, but he encouraged UK-funded membership to the IALA that would help capacity-building programmes, tools and training.

Police have struggled to secure sums of $30,000 to $40,000 to get police boats fixed and build capacity to patrol waters — a concern that previously has been brought up several times by former Police Commissioner Michael Matthews.

When Mr. Jaspert was asked by Mr. Rawat why he didn’t exert his powers over security as governor under the Constitution to stop the barge plan, Mr. Jaspert said he believes the move should be a last resort.

He stood by his decisions to continually express his disagreement with the barge contracts and offer recommendations without wielding his re- serve power.

“I don’t think a governor should be reaching to exert powers as the starting point,” Mr. Jaspert said. “They should be trying to encourage, support, and take forward stronger, more effective self-determination.”