Though the parade normally held to honour the birthday of Queen Elizabeth II was cancelled this year due to the coronavirus pandemic, the customary Medal Ceremony for Years of Service …

END_OF_DOCUMENT_TOKEN_TO_BE_REPLACED 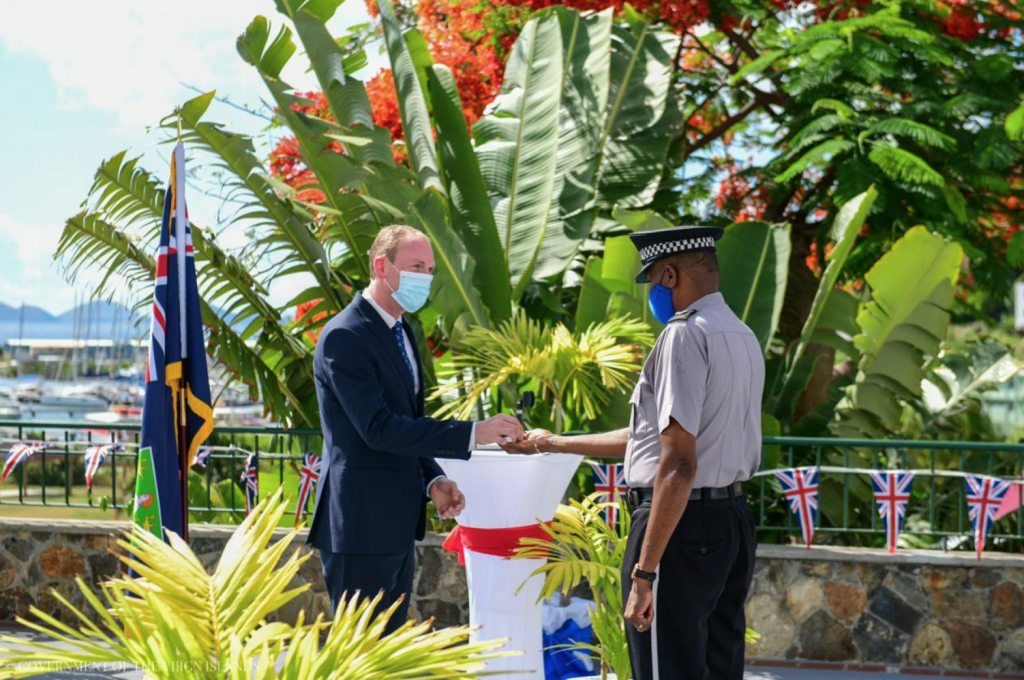 Standing above a shining Road Harbour, 17 fire, police and prison officers were honoured Friday for their dedication to keeping the territory safe. (Photo: GIS)

Though the parade normally held to honour the birthday of Queen Elizabeth II was cancelled this year due to the coronavirus pandemic, the customary Medal Ceremony for Years of Service and Good Conduct was held Friday morning with a few tweaks to ensure safe social distancing.

Usually, the ceremony is held before a crowd of onlookers at the Festival Village Grounds following a procession of uniformed officers, religious and civic organisations, and drum corps members.

But Friday’s ceremony was a much quieter affair, with the public and the media barred from attending in person but invited to watch an online broadcast.

Standing on a patio at the Government House overlooking Road Harbour, some of the territory’s longest-serving fire, police and prison officers, clad in masks and their dress uniforms, stood in formation while waiting to be called to walk up to Governor Gus Jaspert, who dropped a medal into their hand.

Eight police officers received medals for 18 years of service, while two others not in attendance received the first-clasp award denoting more than 25 years on the force. One police inspector was honoured with the second-clasp award for more than 30 years.

Three prison officers were awarded medals for serving for more than 18 years, while one fireman was awarded the first-clasp honour, and two fire officers who didn’t attend received the second clasp.

Prior to honouring the men and women, Mr. Jaspert read a brief message he received from an aide of the Queen after sending her a note wishing her well on her birthday.

“Her Majesty … much appreciates your kind words on her birthday, and sends her warm good wishes, especially in this time of difficulty, to the government and people of the Virgin Islands,’” Mr. Jaspert read.

The governor added, “May we wish Her Majesty a very happy birthday.”

Though the Queen was born on April 21, 1926, the occasion is celebrated on different days throughout the British Commonwealth.