From hosting discussion to protesting a controversial political cartoon, Virgin Islands residents have recently spoken up about the tragic death of American George Floyd and the Black Lives Matter movement …

END_OF_DOCUMENT_TOKEN_TO_BE_REPLACED 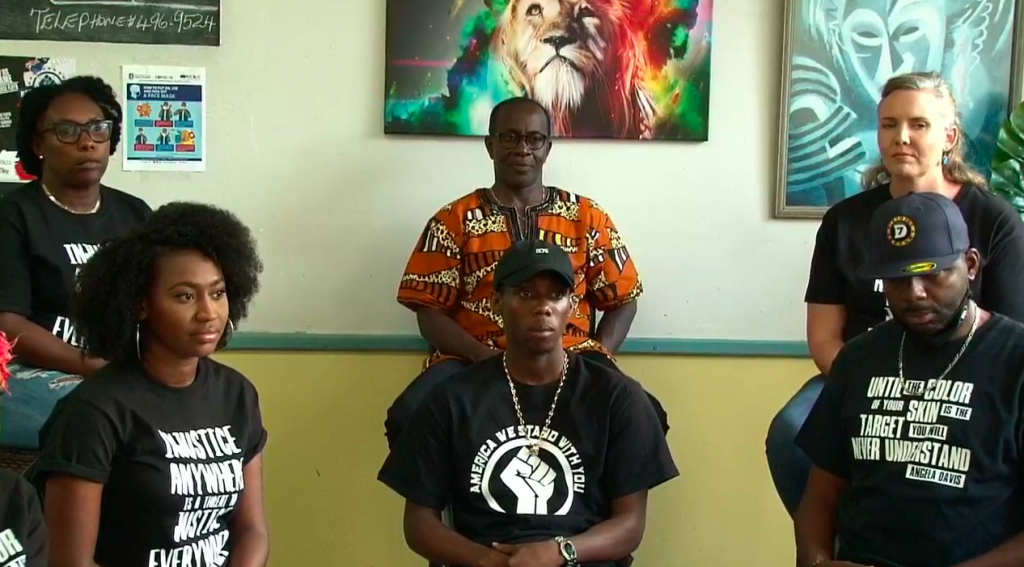 From hosting discussion to protesting a controversial political cartoon, Virgin Islands residents have recently spoken up about the tragic death of American George Floyd and the Black Lives Matter movement happening across the globe.

But they have not yet held a demonstration like the hundreds organised abroad in recent weeks, including on nearby St. Thomas and St. John.

That will change this weekend.

The territory will host a Black Lives Matter March starting at 2:30 p.m. Saturday at the Noel Lloyd Positive Movement Park.

“[The march] is necessary because our silence is loud,” said Nicoy Hendrickson, a coorganiser of the event. “When this country was down, especially after the storms in 2017, our brothers and sisters who live abroad gathered their resources and rallied and helped us. They showed us that we matter no matter where we were in the world.”

By hosting a march, the VI will show that it stands in solidarity with the rest of the world against racial injustice, he said.

Mr. Hendrickson, 21, is a student at Temple University in Philadelphia and an employee at CCT, but he finished high school in South Carolina, where racism is a “heavy issue,” he said.

With his own experiences of racism in the US, Mr. Hendrickson said the issue is not removed from the Virgin Islands.

“We have our own issues at home, and hopefully standing in solidarity will teach us how to stand for ourselves and with others,” Mr. Hendrickson said.

Those joining the march are also encouraged to bring posters and markers, and the march will end at the Queen Elizabeth Park II where speeches will be held.

On May 25, Mr. Floyd, 46, died after police officer Derek Chauvin knelt on his neck for almost nine minutes in Minneapolis, Minnesota. A video of Mr. Floyd’s killing was circulated widely, and it has led to international Black Lives Matter protests, calls for police reform in the United States, and proposals to address structural racism.

Speakers were asked to address two questions: “Do you believe we are at least 20 years away from true change for the Black Lives Matter movement?” and “Are the words ‘African American’ and ‘black’ being used as threatening language?”

Dr. Wheatley spoke first, arguing that the BLM movement has been taking place for centuries.

“Now is really the time to educate yourselves about what is taking place and understand that there is really a struggle that’s taking place in the world,” he said. “About 20 years ago I was really drawn into the movement of black consciousness when I saw the murder of Amadou Diallo in the United States of America. They shot him 40 times and said that his wallet looked like a gun. There was an outcry then, and that was one of the first murders I was aware of. Since then, there have literally been hundreds of hundreds of persons who have experienced this.”

Since Mr. Floyd’s death on May 25, many others in the US have died at the hands of police or in mysterious ways.

Rayshard Brooks, a 27-year-old black man, was shot dead by police officers in Atlanta on Saturday after he was found sleeping in his car outside of a Wendy’s, failed a sobriety test, and resisted arrest, CNN reported. The body of 19-year-old BLM activist Oluwatoyin Salau was found along with a 75-year-old woman in Tallahassee, Florida, The New York Times reported.

In the VI on Monday afternoon, Troy Christopher and Cromwell Smith, also known as Edju En Ka, spoke on the Umoja show, which is broadcast on ZBVI Radio and Facebook.

“When I look at the George Floyd video, what occurred to me in that moment was that a number of people have said, ‘Give this system a chance because it’s going to get better.’ But in that moment, it was so symbolic of the evolution of racism, slavery — there’s a new form of it,” said Mr. Christopher. “And in the new form of it, the white officer was kneel- ing on his neck with his hand in his pocket, contending that he’s not doing anything. What he doesn’t want you to see is that he’s going to kill this man. He pretends that it’s not a big deal. That is what is really symbolic of what’s taking place globally.”

Mr. Christopher argued that a system has been created where a few people “decide what is going to happen and everybody is going to accept it without questions.”

Premier Andrew Fahie also addressed racism last Thursday in the House of Assembly, where he announced plans to establish an equity commission.
“I wish to take this moment to join with other world leaders and the millions of other persons in countries across the globe who are lifting up their voices to demand an end to racism in all forms everywhere, especially against people of African heritage,” he said. “Racism is real, and unfortunately it has managed to bury its roots very deep into the systems that run countries and the world.”

The murder of Mr. Floyd and other incidents have forced societies to confront systemic racism, he added.

Similar issues exist in the VI, Mr. Fahie said, adding that the upcoming constitutional review is a “golden opportunity” to address some issues that have affected the population “where equity is concerned.”

The planned equity commission, he said, will examine underlying issues of equity in how the private and public sector operate.

In the US and other countries, the BLM movement has taken off following Mr. Floyd’s death. Protests were held in all 50 states across the US on June 3, and they continue to happen internationally.

Some protests were violent, with looting and the use of military force, including teargassing and shooting rubber bullets.

At least 15 people have died in protests, many of whom were African American, The Guardian reported.

One such victim was David McAtee, the owner of a barbecue restaurant in Kentucky who was known for offering free meals to officers, The New York Times reported. Officers claim they were fired upon and returned shots, killing Mr. McAtee in the process.

News of violence has quieted, but protests continue to happen throughout the world. Some have achieved results. Officials in Los Angeles, for example, cut $100 million from the budget of the city’s police department.

Meanwhile, San Francisco banned the hiring of police officers with histories of misconduct, Confederate statues have been taken down across the country, and the plaza in front of the White House has been renamed the “Black Lives Matter Plaza.”

Businesses also have spoken out against racism.

Vermont ice-cream maker Ben & Jerry’s stated on its website, “The murder of George Floyd was the result of inhumane police brutality that is perpetuated by a culture of white supremacy. What happened to George Floyd was not the result of a bad apple; it was the predictable consequence of a racist and prejudiced system and culture that has treated black bodies as the enemy from the beginning.”

The company called for US President Donald Trump and other elected officials to commit to a formal process of “re-healing” and reconciliation, passing legislation to study the effects of slavery; ending racial violence; increasing police accountability; and reinvigorating the Department of Justice’s Civil Rights Division to defend “black” and “brown” people.