Virgin Islands leaders are working on a plan to curb marine pollution from boats ahead of a coming audit of the VI Shipping Registry, Natural Resources, Labour and Immigration Minister …

END_OF_DOCUMENT_TOKEN_TO_BE_REPLACED 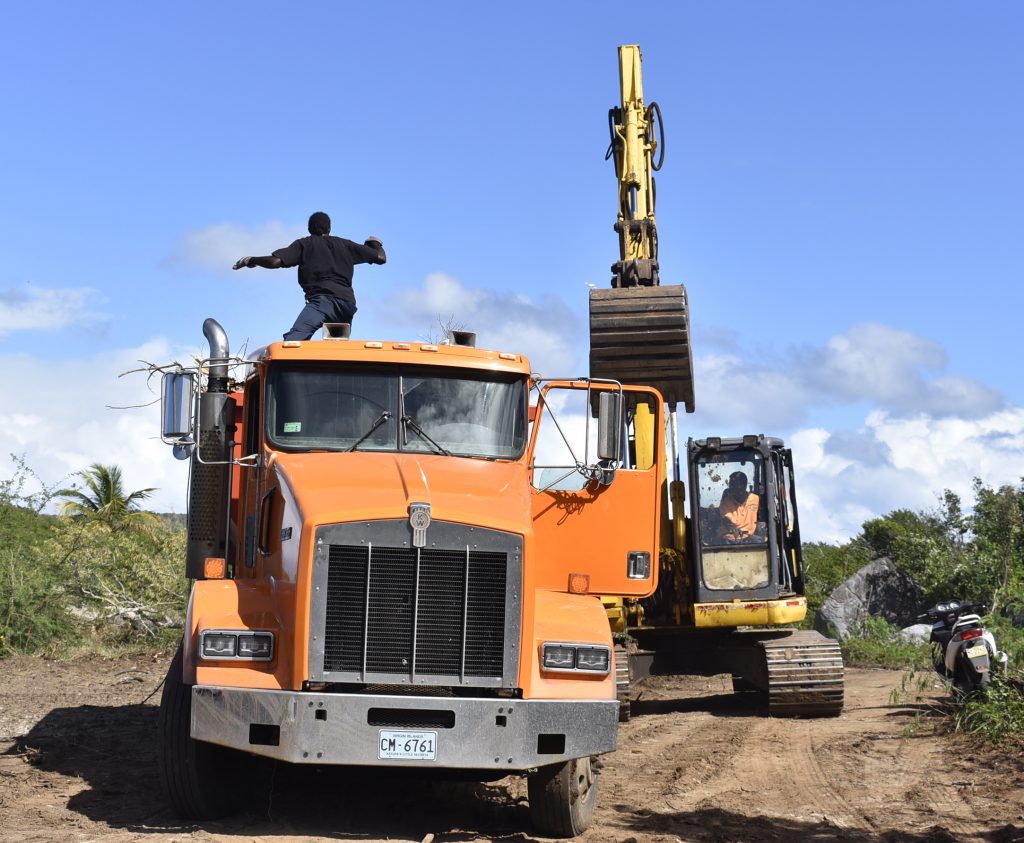 Workers clear the rubble of derelict boats from Trellis Bay in January. Since the, a larger project to deliver vessels from Virgin Islands waters has stalled, but Natural Resources, Labour, and Immigration Minister Vincent Wheatley said last week that he is working with the Recovery and Development Agency to restart the effort. (Photo: JOEY WALDINGER)

Virgin Islands leaders are working on a plan to curb marine pollution from boats ahead of a coming audit of the VI Shipping Registry, Natural Resources, Labour and Immigration Minister Vincent Wheatley said last week in the House of Assembly.

Apart from preparing for the audit, Mr. Wheatley also touted strides he said his ministry has made in discarding derelict vessels; nurturing new mangrove populations; and advancing the “blue economy,” a term often used to mean the sustainable use of oceans for economic gains.

“These details are extremely important to the expansion … of our economy and our support efforts to protect resources for our natural environment while creating new job opportunities along highly skilled sectors,” Mr. Wheatley said in a Feb. 25 statement.

Officials from the NRLI Ministry have partnered with the Premier’s Office to strengthen “a framework for mitigating and responding to pollution” in preparation for the 2020 Shipping Registry audit, according to the minister.

The work, he said, is essential for the territory to maintain its Category One registry designation and continue its “Back to the Sea” training programme and other efforts that promote employment in the maritime sector.

“Teams across various sectors are working diligently to ensure our readiness for the audit,” Mr. Wheatley said, though he did not elaborate on the details of those preparations or how the “framework” will monitor and mitigate shipping pollution.

Mr. Wheatley also mentioned his ministry’s role in helping to rid Beef Island of derelict vessels, which have been strewn about various parts of the territory since the 2017 hurricanes.

According to Mr. Wheatley, the Beef Island operation “has resulted in the improvement of the main approach to the territory via air,” which affords “the first impression for many visitors … as they come into the Virgin Islands.”

The government hired a VI contractor, Mosaka Ventures, to scrap the wrecked vessels dotting Trellis Bay roughly a month after the RDA cancelled the tender process for a larger project to remove derelict boats across the entire territory.

The RDA did not elaborate on what stalled the effort, which was slated to be its biggest project yet, but the agency has been plagued by funding shortages since it was established in 2018.

About a month after sidelining the project, RDA CEO Paul Bayly announced his plan to resign. At the time, there was less than $5.3 million in the trust that funds agency projects.

Since Mr. Wheatley’s January cleanup of Trellis Bay, neither the RDA nor his ministry has announced any further contracts for derelict boat removals, though the minister assured the HOA last week that “we will continue to work diligently with the RDA to continue the cleanup of other vessels.”

The minister also lauded an initiative designed to help decision-makers across multiple sectors of government learn more about the territory’s marine environment.

As a result of an improved ability to survey and map underwater features, six different departments — the Environmental Unit of the MNRLI, the National Parks Trust, the Agriculture and Fisheries Department, the VI Shipping Registry, the Survey Department, and the Town and Country Planning Department — are all positioned to “better plan for economic activities in support of the ‘blue economy roadmap,’” Mr. Wheatley said.

Last month the Recovery and Development Agency procured new marine surveying equipment worth more than $42,000. Over the summer, officials from the National Oceanography Centre, a science and research organisation based in the United Kingdom, led a training session where VI scientists learned how to work the new technology, and in the coming months leaders from the NOC will return to work with VI scientists in mastering the new equipment and using it to produce in-depth analyses, RDA project manager Saski Lang told the Beacon last month.

In recent months, the MNRLI has also led an effort — in partnership with Unite BVI, H. Lavity Stout Community College and researcher Dr. Lianna Jarecki — to start a mangrove nursery.

“We have started a mangrove nursery to ensure a faster replenishment of mangroves following any natural disaster,” Mr. Wheatley said.