About two weeks after Premier Andrew Fahie first hinted that travel restrictions for vaccinated travellers would be loosened as part of a push for a full summer reopening, his administration …

END_OF_DOCUMENT_TOKEN_TO_BE_REPLACED 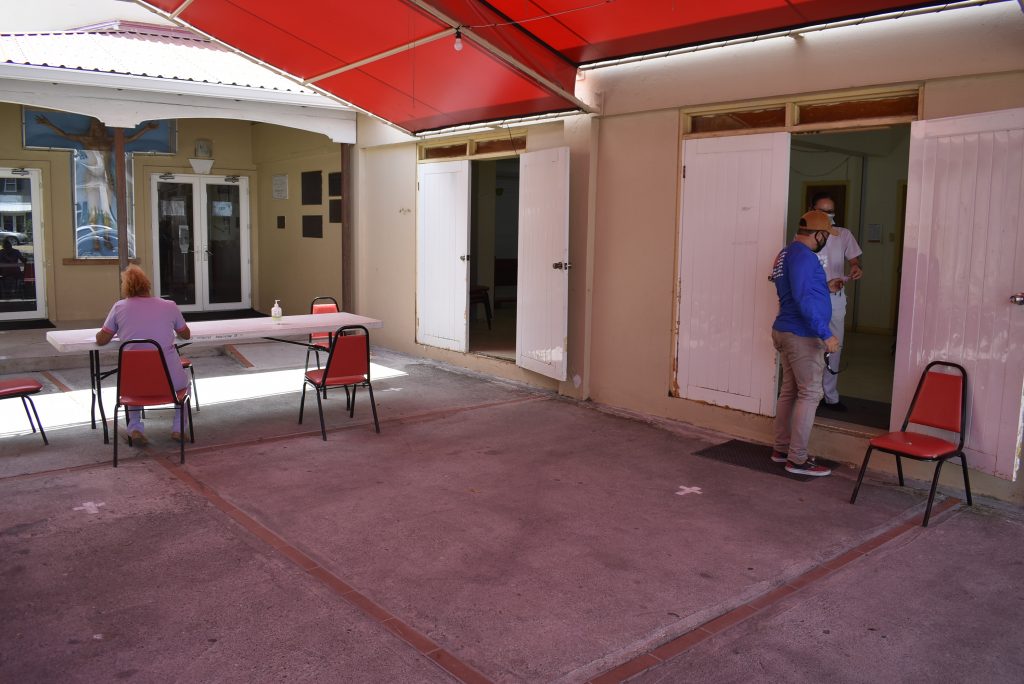 With Covid-19 cases dropping this week, government is continuing to push for a return to normal, announcing that starting next month vaccinated travelers will only have to wait until getting their arrival test results before exploring the territory. (Above) Queues for the vaccine across the territory have dwindled in recent weeks, though a public education campaign to encourage residents to inoculate remains in full effect. (Photo: JOEY WALDINGER)

About two weeks after Premier Andrew Fahie first hinted that travel restrictions for vaccinated travellers would be loosened as part of a push for a full summer reopening, his administration announced on Friday that protocols will be relaxed next month.

Beginning May 15, fully vaccinated travellers will be released from quarantine after receiving a negative result from their arrival-day Covid-19 test, Health and Social Development Minister Carvin Malone said Friday.

Upon arriving in the territory, they must also show proof of their vaccination and of a PCR test taken at least five days before travelling, Mr. Malone said.

Day trips to the United States Virgin Islands, St. Maarten and Puerto Rico will also become much easier, as fully vaccinated people who have spent at least two consecutive weeks in the territory will be exempt from taking a PCR test or going into any quarantine if they spend less than 24 hours abroad, the minister said.

“The territory already has an enviable record for health and safety during the pandemic and [has] continued with its strategy of gradual reopening based on international conditions and the local situation,” Tourism Director Clive McCoy said, adding, “Any progress in that direction augers well for tourism and the economy, and this is a very significant step.”

However, some tourism stakeholders were less optimistic.

While they welcomed the change, they don’t expect to see a boon to their bottom line anytime soon.

“I think this season is shot,” said Ann Creque, the owner of Ann’s Guest Houses on Anegada. Like Ms. Creque, Gary Cottreau, the owner of Kuralu Catamaran Charters, said the announcement has not prompted any guests to make reservations for his business.

Eventually, if the new plan proves to be efficient, and if the government is able to continue opening the borders without changing course, Mr. Cottreau does think guests will return to the territory.

But many customers have already shifted to the USVI, a trend that he doesn’t expect to reverse any time soon.

“That’s not going to stop overnight, … but hopefully overtime things will kind of go back to where they were,” Mr. Cottreau said.

Ms. Creque also questioned the government’s decision to entirely suspend testing and quarantines for day-trippers to nearby islands while still imposing a lockdown — albeit a less harsh one — on other travellers.

This inconsistency, she said, could penalise residents of some sister islands, especially Anegada. “I think that if it’s good for one set of people coming in, then it should be good for everyone,” Ms. Creque said of the upcoming protocols.

However, in spite of the devastation her business has suffered this year, she commended the government for controlling case rates and keeping residents safe, saying that she decided to ride out the pandemic in the VI instead of in the US because of the precautions government took. “The protocols at this point, where people are fully vaccinated, … still need some tweaking,” she said.

Tourists had a mixed reaction as well.

While some were excited at the prospect of visiting the VI without slogging through an often disorganised entry process, others arriving shortly before these changes are slated to take effect were disappointed that they missed the cutoff.

“So close and yet so far,” read one comment by a member of the BVI Alive Facebook group, who said his party of four is arriving May 8.

“Seems like a decision like this should be ‘effective immediately. We have all spent [money] for this wonderful trip to the [VI], and local businesses are losing money every day.”

New travel rules are not the only way in which government is trying to usher in pre-Covid life. Leaders also increased the size of crowds allowed at gatherings from 100 to 250 for faith-based services, weddings, funerals and graduations; and from 75 to 200 for all other events, according to a Public Health Ordinance Gazetted last Thursday.

If an event coordinator anticipates that more than 200 people will show up, they have to obtain written permission from the minister of health and social development, the order states.

These less stringent restrictions come as the number of known active Covid-19 cases dropped over the past week from 10 to four, according to a Tuesday update from the government’s Covid-19 Dashboard.

All four of these cases are located on Tortola and all are asymptomatic, according to the update. Additionally, health workers have now given out 9,883 first doses of the vaccine and 351 second doses, according to the Tuesday update.

As the number of people queuing up for the jab dwindles, the government is also continuing its public education campaign, hosting an information session Sunday at the East End/LongLook Methodist Church.

Government is also working with private businesses to ensure that residents receive their second dose of the vaccination.

Residents were invited to get their second dose Saturday at Rite Way Food Market in Pasea, and the grocer was offering anyone who got their second jab a 10 percent discount on their shopping, according to a Friday MHSD press release.

Correction: This article has been amended to correct Mr. Cottreau’s surname in one instance.