On weekday afternoons when no cruise ships have docked in the port, the Tortola Pier Park’s pristine courtyard tends to be a little sleepy. A handful of residents and tourists …

END_OF_DOCUMENT_TOKEN_TO_BE_REPLACED 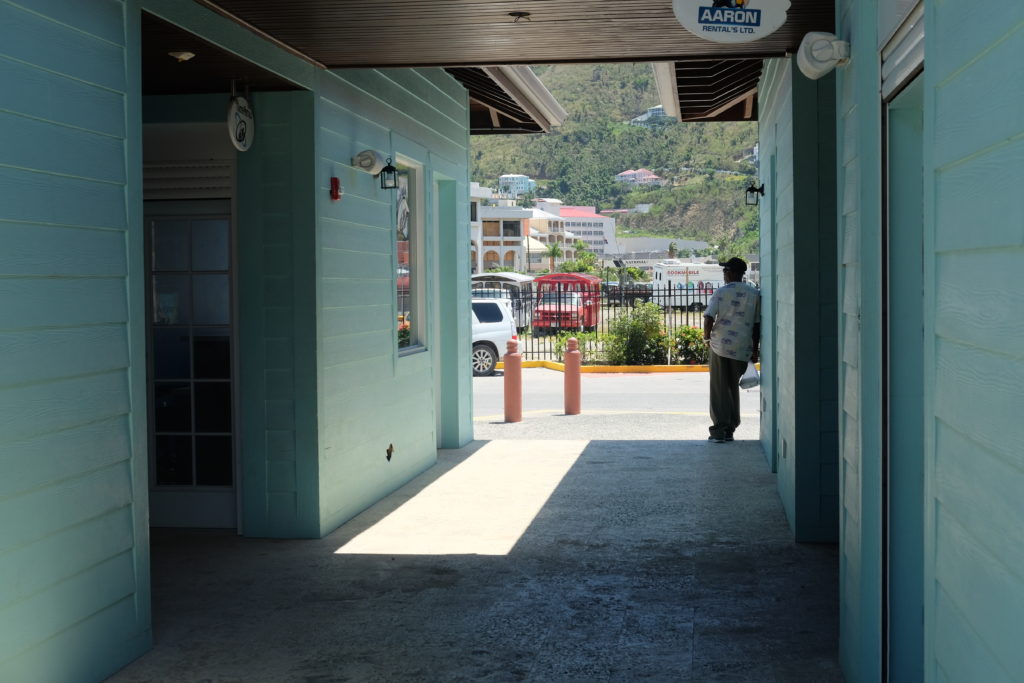 Minister Vanterpool admitted that the territory has been “slow to sufficiently prepare” for larger cruise ships, but promised 80 percent of businesses in the Tortola Pier Park would be open by the end of May. (Photo: AMANDA ULRICH)

On weekday afternoons when no cruise ships have docked in the port, the Tortola Pier Park’s pristine courtyard tends to be a little sleepy.

A handful of residents and tourists wandered around the shops on Tuesday, gathering around tables outside of Mac’s Restaurant and drinking coffee at Beans.

Though the return of two major cruise lines — Disney and Norwegian — has been delayed, officials are promising their arrival to the cruise ship pier in the coming months.

And with it, they said, more shops will be open at the park.

Disney Cruise Line is now “forecasted” to return in July, and Norwegian in October, Communications and Works Minister Mark Vanterpool reported in a House of Assembly session last Thursday.

Meanwhile, he said, the Pier Park will “formally” reopen on May 25 — though many restaurants and stores at the park have been active for months. At the end of May, 80 percent of the businesses will be operational, Mr. Vanterpool said.

Shops in the larger buildings that were damaged by Hurricane Irma are ready to be fitted out, and the “handing over” process to tenants has already begun, he added.

Disney has rerouted all of its ships away from Tortola since Irma, although it has continued to make stops in St. Thomas, St. Maarten, and Castaway Cay, Bahamas. The Disney Fantasy was scheduled to dock in Tortola several times in April, May and June, bringing thousands of visitors to the island.

But the company told passengers that Philipsburg, St. Maarten would replace that port of call from the end of December through next month, according to a Disney Cruise Line blog. The next scheduled Disney Fantasy stop in Tortola will be on July 17, the blog reported.

The Norwegian Getaway was scheduled to return to Tortola two weeks ago, but a Norwegian Cruise Line spokeswoman told the Beacon: “At this time, Norwegian will not be returning to Tortola, BVI until later in the year.”

Mr. Vanterpool admitted last week that the Virgin Islands has lagged behind other Caribbean nations in repairing tourism infrastructure.

“Compared to other destinations damaged by hurricanes Irma and Maria, the territory has been slow to sufficiently prepare to receive the larger cruise ships such as Disney and Norwegian Cruise Lines,” he said.

“This message was clearly conveyed to me in meetings held with [Florida- Caribbean Cruise Association] Operations Committee last week in Miami, Florida.”

In another recent FCCA conference in Fort Lauderdale, Disney officials said they would evaluate the line’s tentative July return date based on a readiness review.

The long laundry list of repairs and updates that must be checked off include: temporary overlaying of tour route roads; reconstruction of vendor stalls and bathrooms in Cane Garden Bay, Long Bay, Beef Island and Brewers Bay; underwater cleanup of beaches; removal of remaining hanging wires and fallen utility poles; removal of derelict vehicles; reconstruction and cleanup of certain museums; and rebuilding structures at the Pier Park.

Mr. Vanterpool said last week that several government departments are continuing to improve amenities and vending across the islands over the next four weeks, as well as clearing cables and resurfacing roads.

On Tortola and Virgin Gorda, 57 percent of retail businesses are fully operational; 70 percent of historical sites are open; 81 percent of vehicles are available for tours; and 77 percent of car rental agencies are open, Mr. Vanterpool added, though he did not explain how he derived those numbers.

In recent months, as smaller cruise ships have come back to the territory, Pier Park shop owners and employees have appreciated the influx of visitors.

Tinikah Tibrey, an employee at the clothing store La Boutique, was hired at the shop just last week.

Since then, she’s seen cruise ship passengers roam around various shops in the park, though the number who actually buy something compared to those who merely browse the store’s offerings is “half and half,” she said.

“Some people like to see what the store has to offer, and then we have people that really want to get something to remember the day,” Ms. Tibrey said.

Vijay Persaud, an employee at Swirlzzz Frozen Yogurt & Treatz, said apart from weekends, business is fairly slow. Mr. Persaud said that before Irma he knew there would be a lot of customers on the days Disney ships docked.

“We get most of our business from the ships. Because otherwise, obviously nobody buys ice cream all day. People come on vacation, come off the ship and come here,” he said.

Larger cruise ships may not have brought their passengers to Tortola this year, but one shop owner said ferries coming from the United States VI right to the TPP have certainly increased sales.

“Of course we’re not having that many cruise ships to begin with,” said Delma Maduro, one of the owners of Camdem Gourmet Market and Rotary district governor elect.

“However, we’ve had really good support from residents, and also the fact that we had ferry boats leaving to and from the Pier Park to go to St. Thomas — that has brought some additional exposure and additional traffic. People who had never been to the park were brought here through the ferry service.”

Business from cruise ship passengers has been “a little bit quiet,” Ms. Maduro said, but she added that the store is well patronised by residents.

“Because the Pier Park is such a lovely space as well, for persons to get away from all the reminders of the hurricane, we find that business from residents has also picked up. It’s like a little haven over here,” she said.

And while Ms. Maduro welcomes the eventual arrival of bigger cruise ships, the increased pedestrian traffic in the area can be a deterrent for regulars and decrease parking.

“But since we err on the side of [serving] healthy food, it would be good for persons to walk a little bit to the shop,” she laughed. “That would add to what we’re trying to do here anyway.”