Touting what they described as progress toward an “agile, lean, digital and green” public sector focused on service and innovation, ministry leaders explained their recent achievements during a “midterm review” …

END_OF_DOCUMENT_TOKEN_TO_BE_REPLACED 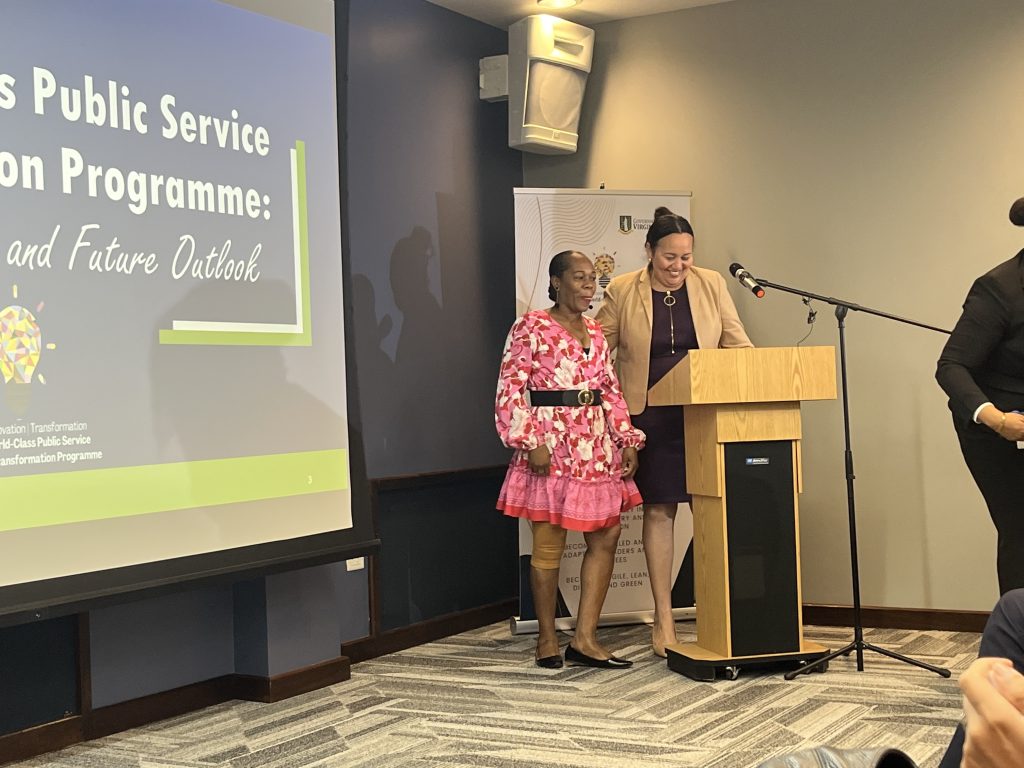 Touting what they described as progress toward an “agile, lean, digital and green” public sector focused on service and innovation, ministry leaders explained their recent achievements during a “midterm review” of the Public Service Transformation Programme on Tuesday morning.

“It is absolutely important for us to have a public service which certainly is client-focused, a public service that is efficient and effective, and a public service that meets the needs of our community,” Premier Dr. Natalio “Sowande” Wheatley said during a press conference at the Financial Services Commission’s Learning Resource Centre. “I believe that transformation is the key [to using our human resources more effectively] by examining our processes and making them more efficient.”

After reviewing the initiative, officials later decided that it should be expanded into the Public Service Transformation Programme. A related framework was published 2019, and the programme officially launched in 2020, Governor John Rankin said.

The strategy centres around three main strategies: “leading globally in service delivery, becoming skilled and adaptable leaders and employees, and becoming agile, lean, digital and green,” according to Ronald Emmanuel, budget coordinator at the Ministry of Finance.

During the “midterm” review on Tuesday, ministry leaders shared their progress over the past four years and outlined upcoming initiatives.

At the Premier’s Office, priority areas include establishing a national complex that will house a cultural arts centre, a national library, a national museum, and the national archives, according to Permanent Secretary Carolyn Stoutt-Igwe.

She also listed recent accomplishments including the digitisation of application processes at the Town and Country Planning Department and the passage of the Trade Commission Act, the Virgin Islands Investment Act, and a suite of legislation designed to facilitate e-government.

The Ministry of Finance, she added, is at work on initiatives including establishing a border surveillance system; developing a comprehensive pension plan; and implementing a deposit insurance system, a paperless environment, and an enhanced treasury processes.

Other permanent secretaries also shared their ministry’s accomplishments and goals.

The Ministry of Communications and Works has digitised files at the Water and Sewerage Department; moved to e-billing and online payments; and implemented new management techniques over the past four years, according to Permanent Secretary Ronald Smith-Berkeley.

Looking ahead, he added, the agency plans to improve the territory’s infrastructure using green building strategies and better engineering practices while working to ensure transparency and accountability in its projects.

Permanent Secretary Natalie Fahie-Smith said the Ministry of Health and Social Development has launched the Complete Health Improvement Programme; delivered the Income Support Programme; completed a draft of the Social Protection Policy; and strengthened the Public Health Unit to respond to the Covid-19 pandemic.

In the next few years, the ministry aims to create a social protection information system; establish a “next-generation” 911 call centre; and modernise prison infrastructure, she added.

The Ministry of Natural Resources and Labour, meanwhile, has drafted the Environment and Coastal Zone Management Bill and merged the Land Registry and the Lands and Survey Department while streamlining their processes, according to Permanent Secretary Joseph Abbott-Smith.

Mr. Rankin said he learned about the PSTP “quickly” after coming to the territory because it is “central” to his role.

“We live in a period of huge change — not just technological change but also population demographics,” he said. “We all know the solution we want out of the equation, which is an effective public service, delivering good governance, delivering for the public, and delivering for businesses.”

The governor added that he looks forward to seeing more changes take place throughout the territory.