COVID-19 > Boarded windows and no electricity

Boarded windows and no electricity

When Hurricane Irma tore through the Virgin Islands three years ago, it took the windows and roof of Benito Fulgencio’s home of 22 years. Without any government assistance, Mr. Fulgencio …

END_OF_DOCUMENT_TOKEN_TO_BE_REPLACED 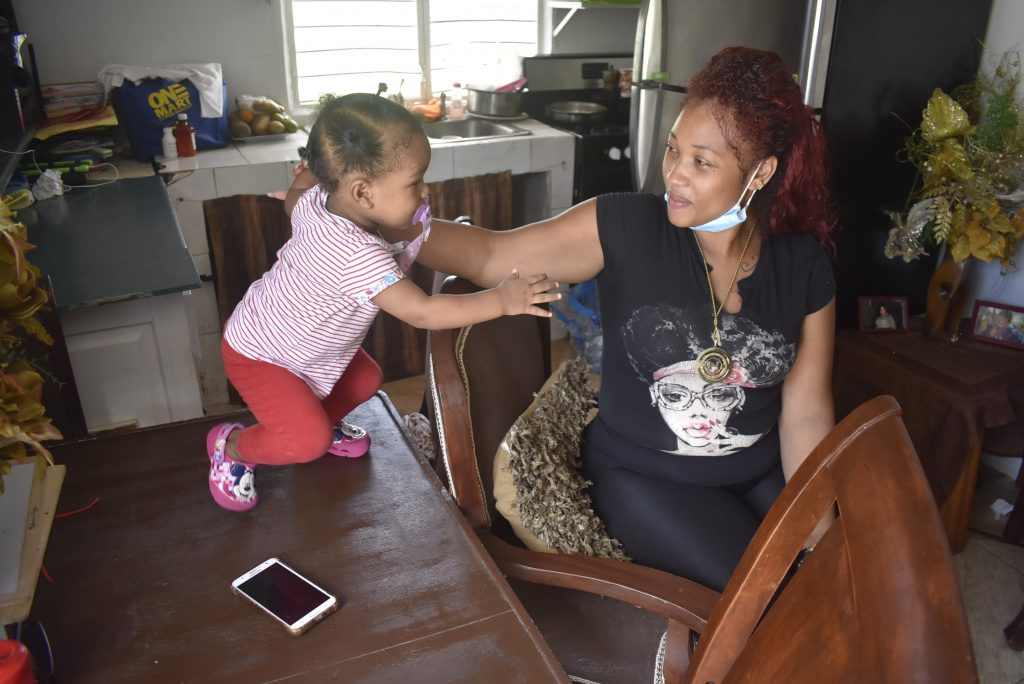 Sitting beneath a roof that leaks when it rains, Elaine Ortiz plays with her 1-year-old daughter in their Purcell Estate home. After losing her job at Dolphin Discovery due to Hurricane Irma, Ms. Ortiz said she has often struggled to make ends meet. (Photo: JOEY WALDINGER)

When Hurricane Irma tore through the Virgin Islands three years ago, it took the windows and roof of Benito Fulgencio’s home of 22 years.

Without any government assistance, Mr. Fulgencio has slowly mended the devastation, installing a corrugated roof, boarding up his windows, and repairing or replacing mangled furniture.

But he still has far to go before his house above Main Street looks anything like it did before the storm.

His cistern was decimated during the hurricane, so Mr. Fulgencio has to collect rain or buy bottled water. Where there used to be windows in the back of his house, there is now an opening stretching from one end of the wall to another. In rain storms, water pools on the floor beneath the gaps in his roof.

Mr. Fulgencio, a bartender at Happy Hour originally from the Dominican Republic, is not the only resident still struggling back to their feet after Irma knocked them down.

“We have people coming in all the time asking if we give grants to assist with repairing their homes,” said Maris Hodge-Wright, the acting director of Family Support Network and a board member for over 30 years.

The scale of devastation was so high after the storm that the FSN expanded its mission to meet the community’s needs.

Whereas its food pantry was previously dedicated to victims of domestic violence, after Irma the organisation opened it to anyone who needed food.

Eventually, many of the post-Irma clients regained enough stability to wean themselves off the service, Ms. Hodge-Wright said.

“Now, we’re seeing some of those people return,” she said, adding that the pandemic has greatly exacerbated many residents’ financial woes. Now, she estimates that about 500 people a month visit the organisation to request grants for “getting their houses fixed or getting their windows fixed” — a service that the FSN doesn’t provide.

“When you have people barely making ends meet and something catastrophic happens, people end up not being able to do what needs to be done,” Ms. Hodge-Wright said.

While the FSN has had to turn away clients who ask for financial assistance for home repairs, since early 2018 the Ministry of Health and Social Development has managed a programme designed to dole out low-interest loans and cash grants to residents who lack the funds for needed home improvements.

But HSD Minister Carvin Malone has said the programme is underfunded by millions of dollars, and many residents seeking assistance never got it.

As of July 10, when Mr. Malone provided the most recent update on the programme, only 213 of 617 applicants had received aid.

The minister, however, didn’t say how much has been spent to date.

And although officials announced in May that $9 million from a $40 million Social Security Board stimulus grant would go to the housing programme, the larger SSB-funded effort has been beset by delays.

Neither Mr. Malone nor HSD Permanent Secretary Petrona Davies could be reached for comment or updated figures on the housing programme’s spending.

Meanwhile, some residents continue to live in homes that were left squalid from the storm’s fury.

Today, Avery Todman’s home at the bottom of Joes Hill whirs with the sound of a generator.

He lost power during the storm and never got it back, as he has been unable to find work and thus unable to pay the $295 he still owes the BVI Electricity Corporation, he said.

His house has no functional plumbing, and water drips to the floor through cracks in his roof.

He says that he survives mostly on the food from his garden.

In Purcell Estate, Elaine Ortiz also has to contend with a leaky roof.

Like so many others, the storm tore apart her roof.

Though a new one has been installed, water still leaks through.

“When rain comes, … the water still comes in,” said Ms. Ortiz, who lives with her three daughters.

Ms. Ortiz’s landlord has promised to fortify her roof and work on other outstanding repairs once his own are fully completed, she said.

But even with a refurbished house, Ms. Ortiz added, she still won’t feel like she’s fully recovered her economic standing.

After the storm passed, she lost her job at Dolphin Discovery and now works at a supermarket, where she makes less money while the cost of living remains as high as ever, she said.

“I get less than before, [much] less,” she said, adding, “Life in Tortola is expensive.”

Ms. Ortiz tried to get help from the government in th emonths after the storm, but with so many others vying for the same services she was told repeatedly to wait, and eventually she decided to fend for herself.

Though Ms. Ortiz has received some assistance from friends and neighbours during her recovery from the storm, she feels that she and other foreigners were excluded from some of the governmental and community support that many Virgin Islanders received.

“They’re [not] going to fight for people from different countries,” said Ms. Ortiz, who is a native of the Dominican Republic.

Christobell Warren, who also lives in Purcell Estate, had insurance to cover the bulk of her damages.

The payout from Caribbean Insurers allowed her and her husband to retile the floors in the second storey of their home and redo their roof, which was plowed through from debris.

But Ms. Warren, who is 77 and retired, also had to take out loans to finance all of the needed repairs, which she is using her social security to pay off.

If the coronavirus continues to strain the Social Security Board’s reserves, Ms. Warren worries that her social security cheques might be imperiled, which could cause her to fall behind on the payments.

“Should it continue the way it is, … a lot of people are gonna be in trouble,” she said.