Entertainment > A day in the life of a stylist: Offering haircuts and a listening ear

A day in the life of a stylist: Offering haircuts and a listening ear

As classical music played softly on a recent Friday morning at Oasis Salon & Spa, David Hawkins washed his first client’s hair. It was a few minutes before 9:30 a.m., …

END_OF_DOCUMENT_TOKEN_TO_BE_REPLACED 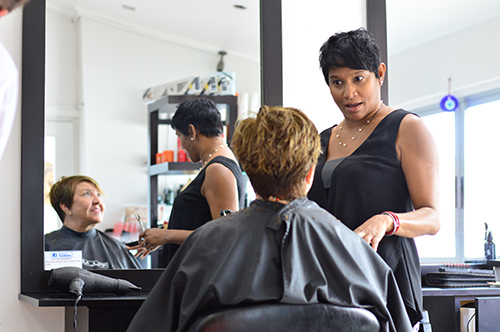 It was a few minutes before 9:30 a.m., and the middle-aged woman was explaining that she wanted the back cut shorter than the front.

“I think I do know what you want,” Mr. Hawkins said.

Then he donned a belt holding scissors and other tools and got to work.

At first, the woman watched his hands closely, but soon she relaxed as they began to chat about other topics, ranging from her upcoming Scotland trip to the relative merits of American beef and New Zealand lamb.

Helping clients relax is very important, according to the English hairstylist, who has been in the profession for 22 years.

By 10:15, the woman’s hair was cut in a pixie-like style and she was beaming.

As soon as she left, Mr. Hawkins began cleaning his workstation in anticipation of his next client. Less than 10 minutes later, an elderly man arrived with his wife.

Day in the life

A day for the stylist typically begins at 8:30 a.m. and it can end as late as 8 p.m., the Virgin Gorda resident explained.

“It has been lots of hard work and lots of learning; lots of standing on your feet,” said Mr. Hawkins, whose career began while in college in England. “I did a charity thing at school where we were shaving boys’ heads for charity and the guy that was supposed to do it didn’t turn up, so they asked if I would do it. Ever since then, I quite enjoyed it.”

The profession is very rewarding, but it has its challenges, according to Mr. Hawkins.

“I’ve had a lady cry on me before,” he said, explaining that she was struggling with marital issues. “She wanted a complete change or restyle. I spent a good 10 to 15 minutes on her consultation, gave her the haircut that we had agreed upon, and then just at the end of the haircut she decided that that wasn’t what she wanted.”

Such dramatic reactions, however, are rare, he said, adding that she eventually decided she liked the style after all.

“It’s one of those things that we have to deal with,” he explained. “There’s really nothing you can do but keep saying sorry. Sometimes I’m not just a hairstylist, but a mind-reader and a psychiatrist.”

Before Mr. Hawkins went to lunch, salon owner Joan McGuire arrived to prepare for one of her regular patrons, who showed up minutes after she did.

“So you’re going back to see the kids in London?” Ms. McGuire asked as she began the haircut.

Many of her clients are “snow birds” who live part-time in the Virgin Islands, said the hairstylist of nearly 30 years.

Shortly before 1 p.m., Mr. Hawkins returned from lunch to repeat his routine several times over with different clients. On a typical day, he sees about nine customers, he explained.

“At the end of the day, I just need to stop talking to people, unwind, and after about an hour of doing that, I feel fine again,” Mr. Hawkins said around 4 p.m. when the traffic had slowed.

Ms. McGuire soon made the decision to close for the day. By 4:30, the workstations were swept and the hair products were back on the shelves in preparation the next day, which Ms. McGuire expected to be busy.