Facing a projected 42 percent dip in government revenue this year due to the Covid-19 pandemic, the Virgin Islands has found some success in opening negotiations with the United Kingdom …

END_OF_DOCUMENT_TOKEN_TO_BE_REPLACED 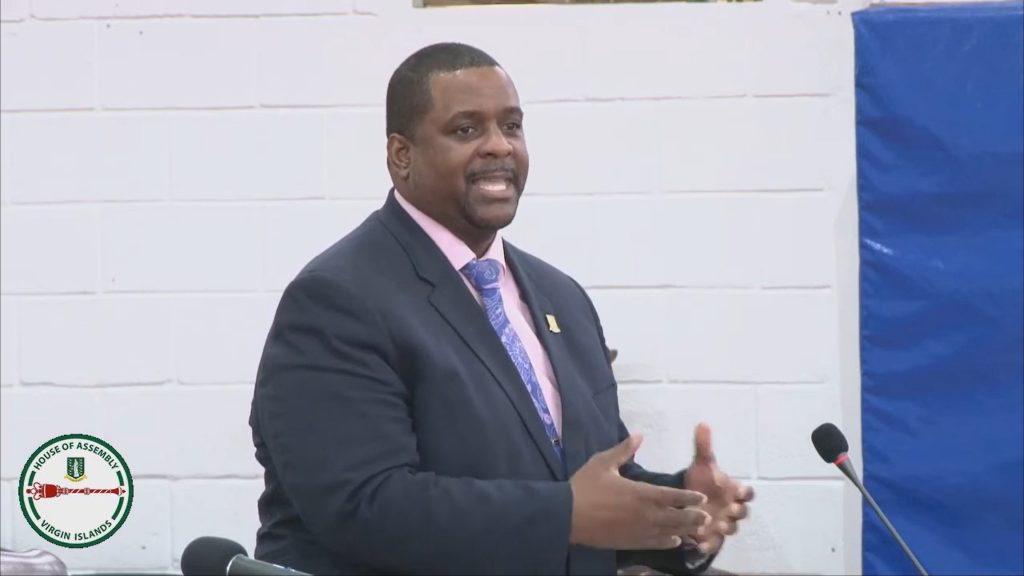 Last Thursday in the House of Assembly, Premier Andrew Fahie presented a request that he and his ministers sent early last month to the United Kingdom. The request cites significant financial woes related to the Covid-19 pandemic as a reason to renegotiate the terms of the territory’s spending and borrowing rules. (Photo: PROVIDED)

Facing a projected 42 percent dip in government revenue this year due to the Covid-19 pandemic, the Virgin Islands has found some success in opening negotiations with the United Kingdom over the rules on how it spends and borrows money, Premier Andrew Fahie said last Thursday in the House of Assembly.

In a May 6 request signed by Mr. Fahie and his ministers, the government petitioned the UK to relax certain measures in the 2012 Protocols for Effective Financial Management on the basis that the territory is experiencing an “unprecedented global financial crisis.”

Last Thursday, the premier presented that request in the HOA, making it available to the public and calling it a “must read.”

The Protocols are a 2012 agreement between the territory and UK government that outlines how much liquid cash the VI has to keep in its reserves relative to how much debt it accepts, as well as other best practices for money management. The premier and Government Gus Jaspert have disagreed recently on whether or not the Protocols have been impeding government’s efforts to fund an economic stimulus package for residents whose livelihoods are affected by the pandemic.

Last Thursday in the HOA, the premier claimed that the territory “recorded a small victory” in negotiations with the UK about the Protocols.

“The UK government moved from a position of zero negotiation on the subject to opening a small window for recalibration of how the ratios are calculated,” Mr. Fahie said.

He added that the borrowing ratios are still too constraining in the context of recent international developments.

Mr. Fahie also released a letter introducing the government’s petition to Baroness Liz Sugg, who was appointed as parliamentary under secretary of state in the Foreign and Commonwealth Office and the Department for International Development on Feb. 13.

In the letter, the premier listed the “catastrophic damages” that the VI has faced in recent years, including during Tropical Storm Otto in 2010, territory-wide flooding in August 2017, hurricanes Irma and Maria in September 2017, and now the pandemic.

“By all world reports, the containment of this virus is yet to be realised and thus the social and economic impacts continue to reap [sic] havoc on our territory and throughout the world,” Mr. Fahie wrote.

The premier expressed concern that drawing significantly from the territory’s reserves to fund the stimulus measures would place the VI in danger of dipping too low in the ratios required in the Protocols. Specifically, the territory has to maintain 25 percent of its assets as on-hand cash, take on no more than 10 percent of its overall budget as debt, and keep the net debt under 80 percent of the recurrent revenue.

He also warned of potentially depleting the reserves as the territory heads into a hurricane season that is predicted to be more active than usual, and expressed concern about how the VI’s financial relationship with the UK could change if disaster struck and the territory had to violate the Protocols to finance recovery.

However, Mr. Jaspert has maintained that the UK has been flexible in the past, allowing the territory to draw on its cash reserves more than usual or take on more borrowing in unusual circumstances. He said recently that if the territory violates the Protocols it would only have to reassure the UK that it has a plan to pay back the debt and rebuild reserves.

The government’s petition to the UK also noted that the VI faces several global issues affecting its economic future.

Chief among these is the projected fallout from the pandemic. The World Health Organisation said it received reports of 6.14 million confirmed cases as of Tuesday.

Measures to slow the virus’ spread, including travel bans and lockdowns, have crippled the cruise and aviation industries — and by extension tourism. The petition states that forecasts show global tourism could lose hundreds of billions of dollars and 50 million jobs.

In the VI, the petition adds, the “VI Fiscal Impact Preliminary Revised Projections” show a 23 percent decline this year in government collections due to declines in financial services revenue, as well as losses in import duties and payroll tax. The forecasts suggested a further 18.5 percent loss in government revenue because of the pandemic’s impact on other key economic drivers in the VI.

“This will have implications for funding the government’s recurrent expenditure and its capital investment programme going forward,” the report states. “It will also place a strain on the public purse as affected employees and businesses turn to the government for support in light of the initial lockdown period and the protraction of the economic impact of the pandemic at home and abroad.”

Projections show about a $32 million expected deficit in the VI with no changes to expenditures, though the overall fiscal deficit could reach $100 million, according to the petition.

The petition also estimates that the total direct revenue loss to the VI’s tourism industry from initial policy decisions is $7.6 million.

“The economic impact on the overnight tourist revenue has already proven to be substantial,” the petition states, putting the revenue fallout from a 30-day border closure in the VI at about $38 million. “After six months, a potentially probable scenario, the BVI’s direct losses could escalate to $234 million, almost a quarter of the territory’s annual gross domestic product.”

The petition did not specify how these projections were calculated.

“Changes in the global climate exacerbate climate hazards and amplify the risk of extreme weather disasters,” according to the petition. “Increases of air and water temperatures lead to rising sea levels, supercharged storms and higher wind speeds, more intense and prolonged droughts and wildfire seasons, heavier precipitation, and flooding. The evidence is overwhelming and the results devastating.”

The petition also pointed to new international financial rules — including the UK’s push for an public register of beneficial ownership — as negatively affecting the VI’s economy, and it noted the impending loss of European Union support because of Brexit.

With the background of recent financial woes and predictions of future strife, the government petition makes a case for reworking or totally suspending certain parts of the Protocols.

Specifically, the petition targets sections 20 and 25 through 28 of the agreement.

Section 20 limits borrowing; section 25 gives the UK secretary of state certain power over capital projects; section 26 requires the territory to present a plan for remedying breaches in the Protocols within three years; section 27 states that government must get written approval from the secretary for certain financial practices if it has “substantive non-compliance” with the Protocols; and section 28 says that breaching the borrowing limits constitutes a breach of the entire agreement.

The VI must suspend the borrowing obligations under the Protocols “if it is to remain viable to provide for the safety and security of its citizens” given the extreme measures it has had to adopt recently, the petition states.

The petition argued that because the UK is responsible for the territory, which is not yet fully self-governing, it has to look out for residents’ interests — in this case, by revising the Protocols.

Also last Thursday, the HOA approved a series of curfew orders enacted to curb the spread of the coronavirus in the territory.

Members also discussed delays in the tabling of the auditor general’s report on BVI Airways.

Opposition member Julian Fraser moved a motion to criticise the governor over the delays, but members then recessed until yesterday after Beacon press time.