A critical piece of hardware broke on the sole firefighting and emergency vehicle at Virgin Gorda’s Taddy Bay Aiport on Monday, forcing the airport to close, according to a Wednesday …

END_OF_DOCUMENT_TOKEN_TO_BE_REPLACED 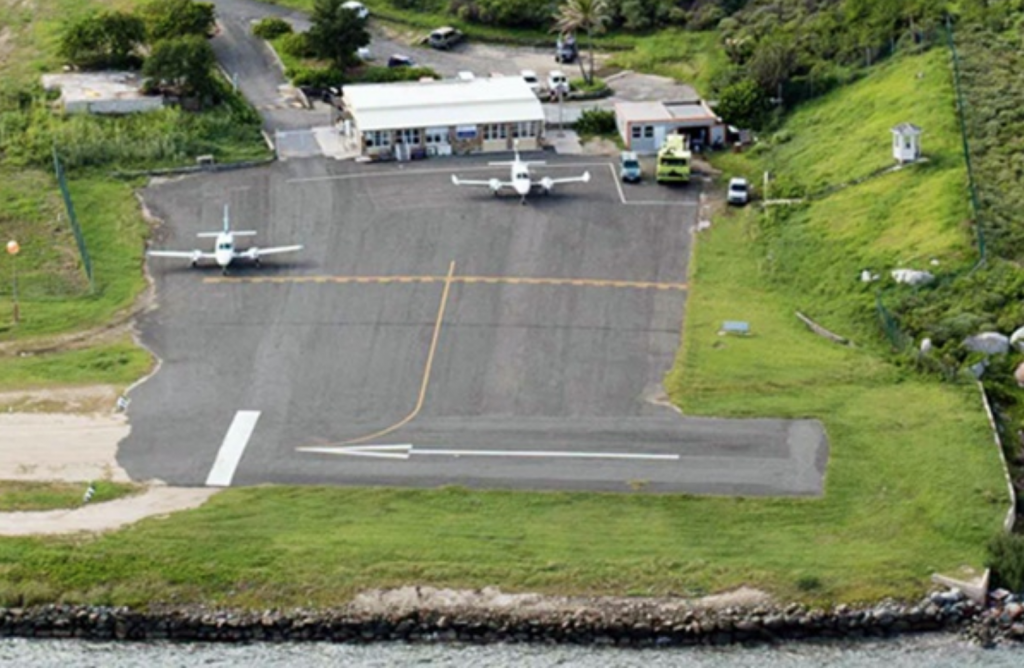 The Taddy Bay Airport on Virgin Gorda has a paved apron in front of its terminal, but the airstrip itself is not paved. That could change soon, according to Premier Andrew Fahie. (File Photo: GIS)

A critical piece of hardware broke on the sole firefighting and emergency vehicle at Virgin Gorda’s Taddy Bay Aiport on Monday, forcing the airport to close, according to a Wednesday statement from Premier Andrew Fahie.

A broken suspension spring left the truck, which was purchased in November 2018, inoperable, Mr. Fahie said, explaining that aviation safety regulations require all airports to have at least one such functioning vehicle.

The BVI Airports Authority is working hard to fix the problem and reopen the airport, according to the premier. He expects the airport to reopen by Friday at the latest.

“I want to extend sincere apologies on behalf of the government and people of the Virgin Islands to all persons who were adversely affected by the closure of the airport,” Mr. Fahie said. “I am advised that the BVIAA is working diligently to have the fire truck repaired within the next 24 hours to 48 hours so that service at the airport can resume.”

In his statement, Mr. Fahie also announced that Coy Levons, the BVIAA director of operations who was acting as managing director, suddenly resigned on Tuesday.

He has been succeeded by Clive Smith, who was appointed to the positions of accountable manager and acting managing director of the BVIAA.

Mr. Fahie did not explain how exactly the spring broke, but he outlined in his Wednesday statement and a July 16 address to the House of Assembly several issues threatening operations at airports across the territory. Among these was the improper storage of the Taddy Bay Airport fire truck.

The vehicle had been stored in the vicinity of the old fire station, which provided inadequate protection and left it constantly exposed to the elements, he said.

Prior to February 2019, construction of a garage to house the truck had been under way after a developer was awarded an $89,000 contract to build the structure, Mr. Fahie said. Development was later halted after the then-BVIAA Board approved an addition to the contract for the development of an office and a watchtower. These two additions cost $127,000, Mr. Fahie said.

“The work remains incomplete and there is still no garage for securing the fire appliance. This venue is not fit for that purpose, as is now evidenced by the breakdown of the vehicle,” Mr. Fahie said in the Wednesday statement, referring to the facility where the truck is currently kept.

This is not the first time the airport has suddenly closed in recent years for similar reasons. Hurricane Irma left the runway damaged and a firefighting vehicle flooded by seawater, which prompted an April 2018 closure. (The current vehicle was purchased the following November.)

At the time, there was dire need for improvements, officials said.

“We don’t think it’ll make another week; we’ve got to be proactive,” said Denniston Fraser, then-managing director of the BVIAA, referring to the truck that was damaged during Irma.

Residents were upset the last time the airport closed on short notice.

Christina Yates, the owner of Leverick Bay Resort and Virgin Gorda Villa Rentals and a partner in Yates Associates Construction Company Limited, called the failure to fix the waterlogged fire truck government “incompetence,” and the sudden decision to close the airport “disgusting.”

At the time, Vincent Wheatley, then the VG district officer, shared Ms. Yates’ frustration, but was later pleased by the influx of visitors after the airport reopened.