Aqueelah Frett’s sons Sekoi Smith and Malekoi Blyden used to be reluctant to help out with chores at home, but that all changed last year after she signed them up …

END_OF_DOCUMENT_TOKEN_TO_BE_REPLACED 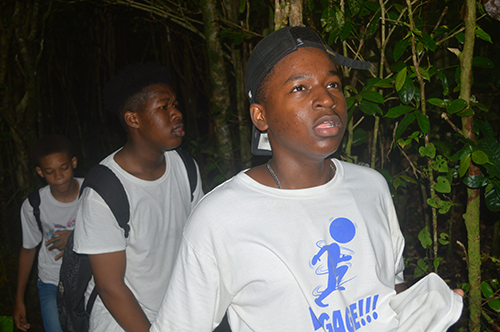 Boys from the group Mentoring Anointed Leaders Everywhere hike to the top of Sage Mountain on Saturday. The group meets every Saturday at Althea Scatliffe Primary School. Photo: NGOVOU GYANG

Aqueelah Frett’s sons Sekoi Smith and Malekoi Blyden used to be reluctant to help out with chores at home, but that all changed last year after she signed them up for the boys’ programme Mentoring Anointed Leaders Everywhere.

“They [listen more, follow] the rules of the house, [respect me as] the parent and are kind,” Ms. Frett said on Saturday morning after she dropped off the boys at the Althea Scatliffe Primary School where MALE holds its weekly sessions.

The boys now willingly help out with various tasks around the house, their mother explained.

With such testimonies, the three-year-old organisation is achieving its objectives, said Anderson Tittle, who started the programme with McKenzie Baltimore, Sr.

“It’s a lot of work, but it’s rewarding when you meet the boys on the streets and they open up to you, greet you; they improve on their schoolwork and behave well at home,” Mr. Tittle said.

The group hosts at least one bonding activity each quarter, and on Saturday that meant a hike at Sage Mountain.

“Everyone come to the stairs, so we can pray and get our mission for the day,” Mr. Tittle shouted to the boys scattered around the courtyard, who were all dressed in white shirts.

“Who are we?” the leader yelled.

Apart from encouraging brotherhood, the mentors coach the members on being positive role models, according to Mr. Tittle, who is a corporate administrator at Mossack Fonseca and a youth pastor at New Life Baptist Church.

“They are conscious of what they do,” he said. “We keep drilling it into them that they need to set positive examples and they don’t have to be old to set good examples.”

Most of the participants’ parents signed them up, but a few were referred to the mentorship programme through the courts, according to Mr. Tittle.

“Right now we have a young man who the magistrate has ordered to attend the programme,” he said. “We keep him busy and he is very active in the garden. He’s got pride now in what he’s doing. He looks forward to coming to MALE and interacting with the boys.”

Before the boys were loaded in a bus for Sage Mountain, some of them went to the MALE garden to check up on their plants.

K’oni Williams was among them. K’oni, an 11-year-old who attends Ebenezer Thomas Primary School, had one of the tallest plants in the garden: a pea plant.

“I feel happy seeing the plant grow this big,” he said. “The tree hasn’t grown any peas yet, and I think it is because the animals keep eating them up.”

But he won’t give up, he explained.

K’oni is one of the programme’s many success stories, Mr. Tittle explained.

“He’s very quiet and reserved, but he’s one of the young boys that I know will go places,” he said. “He’s getting ready to go into high school, and I pray he remains as sweet as he is when he gets to high school.”

K’oni agreed that the programme has benefited him.

“I’ve learned my manners very well. I’ve learned how to help the community a lot,” he said. “I was kind of spoilt before I joined MALE: I wouldn’t help around the house. I would just stay there playing games. Now I help out more.”

“Every third Saturday, the boys bring their homework and whatever is posing a challenge to them in school,” he said, adding that the older boys help out their younger counterparts.

But the organisation, which operates on donations, could use more help with tutoring and finances, the mentor said.

“We have Ms. Sharie de Castro who is helping us structure that [academic] aspect, and it’s going good so far,” he said. “I’ll like to see more teachers every now and then — especially male teachers. We would love to see a lot of males, not just teachers. We need more of a male presence so they can help shape the boys’ lives.”

MALE helps to address areas of parenting that some parents might miss, according to Ms. Frett.

“The MALE programme is capturing, for example, basic things I’ve noticed based on my relationships,” he said. “Guys now don’t know how to treat women, and this programme is instilling those values and helping [the boys] know what to do. Being a single parent, they need a male figure to help keep them in line.”

Shortly after 10 a.m. the group arrived at Sage Mountain via bus, where they met John Cline, the bishop at New Life Baptist Church.

Mr. Cline took the boys down the trail at the national park.

“This is how we help to save the seed,” the preacher said as the group braved sporadic rain showers and finally arrived at the peak of the mountain.

As the boys climbed the lookout at the top, rain began to drizzle.

“I think one of the things the boys have to understand is life is a journey and every day is not going to be sunny,” Mr. Cline said. “Today is a cloudy day — it’s raining, it’s slippery — but you have to keep moving, and even this hike will teach the young people that as you go through life you’re going to meet some slippery patches, some not-so-sunny days.”