Some 15 tonnes of lead remain on Carrot Shoal (FULL TEXT)

Some people in the yacht industry were livid when the Parsifal III, a privately owned luxury superyacht, returned to Virgin Islands waters around Christmas and stayed into this month. About …

END_OF_DOCUMENT_TOKEN_TO_BE_REPLACED 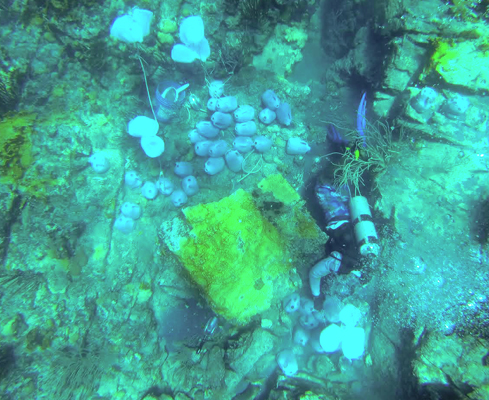 A diver works to clean up some of the 30 tonnes of lead shot that was spilled from the keel of a superyacht that grounded on Carrot Shoal on the southwest tip of Peter Island about a year ago. The cleanup effort has since been suspended.

Some people in the yacht industry were livid when the Parsifal III, a privately owned luxury superyacht, returned to Virgin Islands waters around Christmas and stayed into this month.

About a year ago, on Jan. 2, 2013, the 178-foot sailboat slammed into Carrot Shoal just off the southern tip of Peter Island, rupturing its keel and spilling roughly 30 tonnes of lead shot onto the thriving reef.

On Feb. 24, lawyers representing the yacht, which is managed by the international marine company Camper and Nicholsons, are expected to fight to limit their clients’ responsibility for the accident.

“It’s disgusting,” Trish Baily, a long-time charter yacht captain in the territory, said Tuesday of the damage to the reef. “What amazes me is how little discussion there has been about this.”

In the months after the grounding, the site was surveyed and government hired two companies — Husky Salvage & Towing and Commercial Dive Services — to clean up the mess.

But the job isn’t done.

“We cleaned up more than half — the bulk of it has been cleaned up,” said Kevin Rowlette, owner of Husky. “There’s still a lot of detailing.”

The cleanup was difficult, not only because of the weight and amount of the lead, but also because Carrot Shoal is in open water, exposed to the elements. The two companies cleaned the area — weather permitting — for several months, but eventually government stopped funding the project.

“Honestly, I’d love to do it voluntarily, but we have to pay our divers. It’s a huge expense,” Mr. Rowlette said, later adding, “We want to see it through.”

To that end, the financial burden of the cleanup so far has been placed solely on the VI government.

The owners of the Parsifal III haven’t paid a dime, according to Dr. Shannon Gore, a former employee of the Conservation and Fisheries Department. Though Dr. Gore has since left her government position, she wrote a report on the damage to Carrot Shoal in the months after the grounding.

“Aside from large broken fragments of rock from the impact of the keel, a large area of benthic species — corals, algae, sponge, invertebrates, etc. — were destroyed from being smothered by either rock fragments or lead,” she wrote in an e-mail that was circulated in the yachting community. “The worst potential environmental impacts, [however], come from the long-term effects of lead shot in the marine environment.”

Government has already spent some $300,000 to clean up the lead, according to documents filed at the High Court Registry.

“There’s a lot of lead still scattered around,” he said. “At this point it’ll be much more time-consuming for divers. The rate of [recovery of the spilled lead] will decrease, and [the lead] is gradually getting buried.”

On Feb. 24, lawyers representing the yacht are expected to appear in VI civil court to argue that they’re only accountable for $250,000 of damage, according to Dr. Gore.

“They are seeking the limit of liability under the VI Merchant Shipping Act,” she said, adding that the Attorney General’s Chambers has been working “tirelessly” on the case for months.

The regulations prohibit polluting VI waters, but they also state that violators are subject to a fine “not exceeding” $1,000.

Some in the yachting industry think the Parsifal III may get away without paying the full cost of the cleanup.

“It’s a huge issue, and I think people are really starting to look at whether [megayachts] are really beneficial or not,” Ms. Baily said Tuesday.

In recent years, many government officials have promoted bringing megayachts to the territory, saying they have the potential to provide career opportunities for belongers and bring in additional revenue.

There isn’t much scientific information about the long-term effects of lead shot in a marine ecosystem, according to Dr. Gore.

“Lead is neither essential nor beneficial to life, and all measurable effects are adverse,” she wrote in the e-mail.

Extensive scientific literature does exist on what lead can do to an organism, but the amount of lead shot spilled on Carrot Shoal is “globally unprecedented,” she added.

With so much lead remaining on the reef, it’s likely eroding into particle matter that can be more easily absorbed by the surrounding ecosystem, which could pose a major problem for commercial fisheries, the biologist explained.

“Additionally, a number of breeding and foraging sea birds near Carrot Shoal could easily ingest fish that have bio-accumulated lead,” according to Dr. Gore. “Once ingested, these birds have no chance for survival, as lead is extremely toxic.”

E-mails sent to the captain of the vessel, Glen Shepherd, after the incident were unanswered.

The Parsifal III is owned by Kim Vibe-Petersen, a Danish millionaire who, according to the website Yachting World, “invented an ingenious coffee and cappuccino brewing machine used in restaurants and hotels worldwide.”

Contacted yesterday, the manager of the yacht, Alex Garrow, declined to comment on the grounding or any legal matters. “I just manage the boat,” he said. “I don’t have any information about that.”