Lobster Fest a hit on Anegada

“We just ran out of lobster.” It was perhaps the best thing Anegada Reef Hotel co-owner Lawrence Wheatley could have said Saturday evening about how the 2017 Anegada Lobster Festival …

END_OF_DOCUMENT_TOKEN_TO_BE_REPLACED 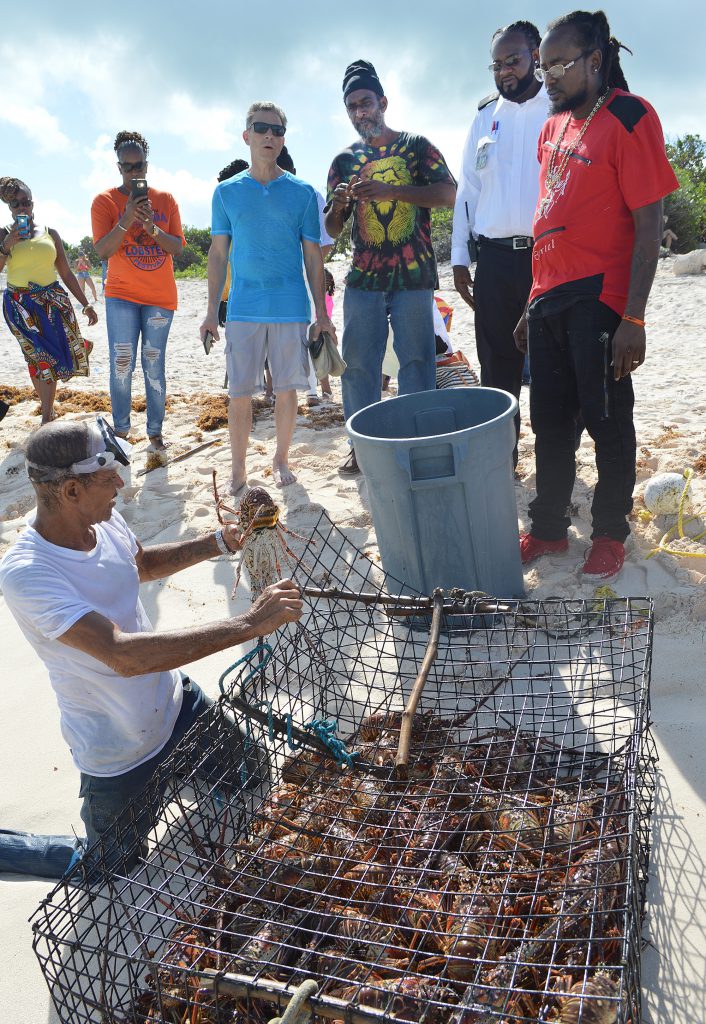 Anegada Lobster Festival attendees look on as a fisherman pulls lobsters from a trap at Loblolly Bay on Saturday. The event drew more than 1,500 people to the sister island. Photo: CONOR KING DEVITT

“We just ran out of lobster.”

It was perhaps the best thing Anegada Reef Hotel co-owner Lawrence Wheatley could have said Saturday evening about how the 2017 Anegada Lobster Festival was going.

After a difficult two months of cleaning up his business after Hurricane Irma, he wasn’t sure anyone would even show up for one of the first major events to happen in the Virgin Islands since the storm, let alone gobble up his inventory.

Keith Dawson, regional marketing manager for the BVI Tourist Board, confirmed total attendance was at least 1,500, with 450-500 attending Saturday and 950-1,000 Sunday. These figures included people who arrived by ferry, but not those who arrived on their own boats, by barge or by air.

He also confirmed that, due to a higher turnout than expected, a second ferry and a second barge needed to be sent to accommodate extra passengers and vehicles.

“Let it be known, this was not about lobster this year: It was about the people,” read a statement Monday on the BVITB Facebook page. “It was the first event since the hurricanes and an opportunity for a gathering, and the people came in big numbers. This year was a scaled down version of past years, but the community came in support and there was nothing but smiles, laughter and love.”

Diane Levons of Big Bamboo in Loblolly Bay, was so busy serving up $7 lobster samplers alongside a buffet of ribs, conch stew and macaroni, that she barely had a moment to respond.

“Wonderful,” she said of the turnout. “I never thought it would be this successful.”

It likely would have made her husband, restaurateur and community leader Aubrey Levons, who died Nov. 3 in the midst of festival preparations, very proud.

Safari buses transported festivalgoers from location to location for $5 per leg so they could try each of six different lobster samplers at participating restaurants around the island in hopes of winning a bag full of prizes. On the beach near Big Bamboo, families swam and snapped photos as a fisherman hauled in a trap loaded with crustaceans, selecting some to put in a bucket to take up to the restaurant and throwing the rest back to sea.

Jacqui Norris arrived on the barge with a carload of employees from the Tortola-based Proudly African.

“This gives everybody a chance to get off whatever island they’re on and support the territory,” she said. “It shows we’re not just going to Virgin Gorda or Jost Van Dyke. We’re going everywhere.”

Some Anegadeans admitted that they had kept their expectations for the festival low, not knowing what the turnout would be. There was some concern among businesses that the pressure they were under to get tourist-ready may not be worth it.

“We may not recoup the costs,” Mr. Wheatley said.

“Apprehensive” was the word Cherry-Ann George-Smith used to describe how she felt in the days leading up to the festival. She, with two employees, was busy doling out buffet-style food from under a tent near the Setting Point ferry dock.

“For a small vendor, we knew we may not break even from this,” she said. “But it’s not just about the money. It’s about making sure people know that we are open for business.”

Although Anegada fared better than the other VI islands in Irma, the success of the festival depended equally on its neighbours, and whether people were mentally and financially ready to celebrate.

“People lost jobs, they’re busy rebuilding their homes,” Mr. Wheatley said. “I knew they may not have the money to come here.”

Gregory Allen, who arrived with friends on the ferry from St. John, said his island lost nearly half its population after residents moved away post-Irma.

“When you lose 2,000 people on a neighbouring island, that’s going to put a dent in the numbers no matter what,” he said.

Already, out in the harbour at Setting Point, dozens of boats were moored, the most seen there at any one time since Irma.

Charter captain Justin Tyrrell, who brought over a boatload of friends from St. Thomas, said he was relieved to get a break from his home island, which, like Tortola, has only a fraction of its electricity restored.

“The water is so much cleaner here,” he added. “Back home, it’s full of diesel and runoff.”

Ferry captain Sean Whyte of Inter-Island Boat Services, who sailed to Anegada from St. Thomas and St. John, said he was pleasantly surprised.

“I figured people would be busy rebuilding,” he said. “But the boats are coming up loaded.”

Ms. George-Smith said people had been telling her all day how surprised they were at how great Anegada looks.

“Their islands have been destroyed, so going to Anegada is a way to get their minds off that,” she said.

Toward the end of the day, a singer at Big Bamboo introduced a cover of John Lennon’s song “Imagine,” which includes the line “Imagine no possessions.”

“After Irma, a lot of us know what that’s like,” she joked.

At sundown, a boisterous crowd packed onto the Lady Caroline — the brand-new vessel operated by Road Town Fast Ferry — for the 6:30 p.m. trip back to Tortola, complete with an onboard bar and a deejay determined to keep the party going.

And as for the dwindling lobster, Mr. Wheatley maintained that he still had enough for Sunday.

“But I hope people get here early,” he said.