On Friday, Premier Dr. Orlando Smith signed an agreement with the ICA (BVI) Group Corporation to redevelop government’s Prospect Reef Resort. The property has long needed a facelift, as evidenced …

END_OF_DOCUMENT_TOKEN_TO_BE_REPLACED 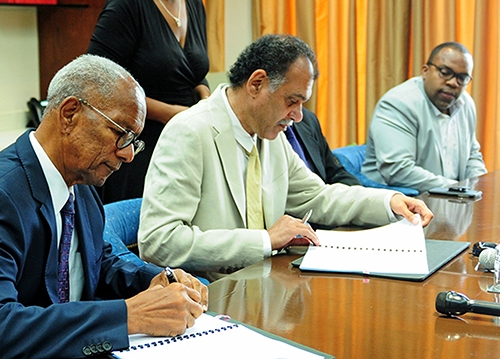 Former Premier Dr. Orlando Smith and Mr. Shaikh sign an agreement to develop Prospect Reef in July 2017 as Dion Stoutt, director of ICA’s local subsidiary, looks on at right. The media were not invited to the signing ceremony.(Photo: GIS)

The property has long needed a facelift, as evidenced by comments from online reviewers in recent years that have consistently described the hotel as “dirty” and “in need of renovations.”

In exchange for a renewable term lease for the property, ICA will finance, develop and operate Prospect Reef.

Ali Nawaz Shaikh, the managing director of ICA, said the project will likely include the construction of around 190-200 rooms across two hotels, as well as condos, town houses, a marina, a conference centre and parking lots.

However, Mr. Shaikh, who said he is a native of the United Arab Emirates, also noted that the master plan for the development is not yet complete and the number of rooms could fluctuate.

The final product is also slated to include an infinity pool, a saltwater pool, villas and the Dolphin Discovery Centre, which will likely be the focus of one of the hotels, he added.

Though Government Information Services reported that ICA will invest $90 million in the project, Mr. Shaikh noted that the amount could rise to $110 million, depending on details in the yet-to-be-completed master plan.

The idea is to create a facility that could accommodate conferences with as many as 400 people, Dr. Smith (R-at large) explained in a GIS press release about the signing ceremony, which the media were not invited to attend.

“We have had occasions where we wanted to have large conferences here in the BVI and had to have them moved to other jurisdictions because of lack of facilities in the territory,” he said. “In addition, for BVIslanders and residents, my government also desired to have an institution to develop culinary skills.”

Neither the premier nor Brodrick Penn, the permanent secretary for the Premier’s Office, could be reached for further comment about the contract. Both were away from the territory this week on government business.

Deputy Secretary Elvia Smith-Maduro said the contract document was not ready to be provided to the public, though it would be in the future.