It has been an intense two weeks for the territory’s sport fishing community. On the heels of Scrub Island’s inaugural Blue Marlin Invitational Tournament last week, the BVI Sport Fishing …

END_OF_DOCUMENT_TOKEN_TO_BE_REPLACED 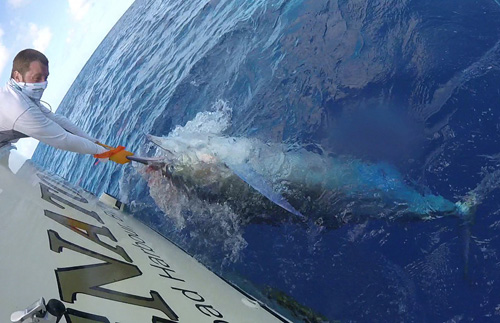 Jordan Noakes Romney, a fisherman on Venator, works to pull in a marlin during the first Virgin Gorda International Marlin Tournament. Venator would go on to take second place in the competition. Photo: JACK CADMAN

It has been an intense two weeks for the territory’s sport fishing community.

“We had good participation,” said Dr. Hubert O’Neal, Virgin Gorda’s legislator and a sport fishing enthusiast. “And, seeing that it is the first billfish tournament that the association has put on, I think they did a great job. I know too that they had a late start in preparing and marketing the tournament, but, despite that, it still came off pretty well.”

The BVISFA partnered with the Virgin Gorda Yacht Harbour to host the tournament. One of the competing boats came from St. Martin; the other seven were local.

“It was a great tournament,” said Krystino Vialva, public relations coordinator for the BVIFSA and one of the tournament’s organisers. “Next year we’ll probably try to push it to before the [full] moon, instead of after the moon like what we did this year.”

Mr. Vialva — who was also on the crew of Indigo, the first place boat — praised government’s support for the tournament.

“The Fisheries Department was great; they came out and they helped,” he said, adding that the department made it easy to get permits for all of the participants.