Officials called it a red-letter day for the territory as they broke ground Thursday afternoon on the territory’s cruise ship pier expansion, but the “Mount Everest climb” is only half …

END_OF_DOCUMENT_TOKEN_TO_BE_REPLACED 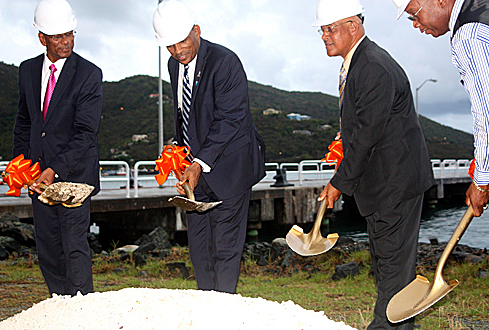 Officials called it a red-letter day for the territory as they broke ground Thursday afternoon on the territory’s cruise ship pier expansion, but the “Mount Everest climb” is only half done, according to BVI Ports Authority Director Claude Skelton-Cline.

“Today we pause and celebrate, and tomorrow we will be right back at it,” Mr. Skelton-Cline said shortly before joining Premier Dr. Orlando Smith, Communications and Works Minister Mark Vanterpool, and BVIPA Chairman Edward de Castro in turning over soil at the site with gold-coloured shovels.

Project Manager Dion Stoutt said the works will include lengthening, widening and strengthening the existing cruise ship pier, as well as dredging near the pier and in the “turning basin” of the harbour to allow the territory to be able to handle the larger “new class” of cruise ships travelling Caribbean waters.

Soil dredged will be used to create a bulkhead and add up to two acres of land near the Central Administration Building, he said, adding that a boardwalk along the water will also be added in the first phase of works.